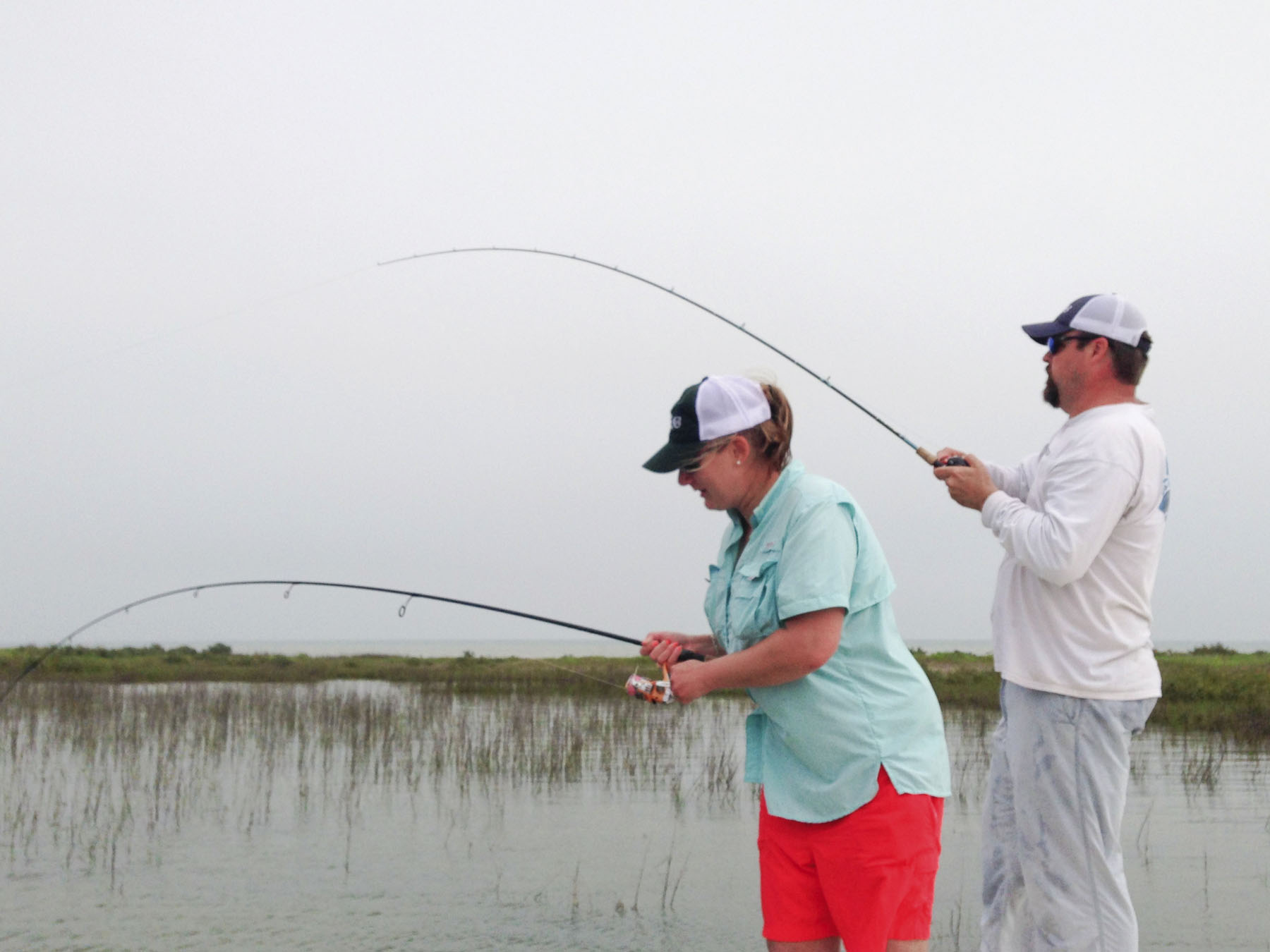 Steve and Amanda Stephenson getting big results in shallow water.
Spring has been a rollercoaster. Water levels have surged, only to be blown out a day later by strong and cold north wind. Inconsistent weather and changing wind have kept us on our toes. Game plans changed almost daily in early-April and the only thing we could count on was wind.

Speaking of windy day game plans, I had the pleasure of fishing with Steve Stephenson and his lovely wife Amanda recently. Steve booked the trip for her birthday present and made it clear that while he enjoys wading with lures, this trip was to be all about her and the way she likes to fish. He proceeded to say Amanda was a skilled anger and also a wader. She loves to use live shrimp and her favorite species is redfish. I had no problem with that because wading for shallow redfish is one of my favorites too.

So with the information Steve had given me I drew up a game plan. Wind was sure to be a factor and since Amanda wanted redfish, the back lakes was a no-brainer. I know, I've said it a hundred times, but when it comes to fishing on windy days my thoughts turn immediately to the protected marsh country. As luck would have it the redfish happened to be there too.

Even though I expected we'd likely be staying in the boat, given the probability of tough mud wading in the lakes, I told Steve to bring their wading gear all the same. My secondary plan was San Antonio Bay for a little trout action after catching some redfish, if the wind would allow.

We had a short meet and greet and Steve and Amanda loaded their gear in my boat. Though I hate to admit it, I can usually size up an angler's skill level by the gear they bring. Steve and Amanda had all the right stuff... ForEverLast wading gear, Waterloo rods, nice reels, good line and a little extra tackle. I put a quart of shrimp in the live-well and we were off.

I rigged Amanda with a Bass Assassin Kwik Cork for her shrimp and we started our first drift. Amanda's first cast produced a small "keeper" red which was quickly released. An appealing characteristic these two share is their respect for our fisheries. After a brief discussion on the strengths and weaknesses of our numbers they told me that they usually keep only a few for dinner and release the rest. They had no desire to fill their freezer with fish they probably wouldn't eat for months. I like that!

Now before you go calling me a snob about keeping fish, think again. I have absolutely NO problem with anglers keeping their legal limit, as long as those fillets get eaten. I have plenty of clients who keep limits and eat every fillet, but those stories of ziplock bags full of freezer-burned "dust bunnies" from years ago really irk me.

Okay that's a bit off topic, so back to fishing. After a few more LONG drifts we were averaging (I should say Amanda was) 1 to 2 reds per drift. Steve and I chunking artificials had a big fat goose egg on our scorecard. Noticing more mullet activity in the grass line up against the shore I decided it was time to start poling next to the bank. Needless to say Amanda was hooking up with every cast and I'm not talking about little fish. The reds she was catching averaged 25-inches and were shaped like footballs. Poor Steve and I struggled on with our plastics.

Finally, after some serious butt whipping, I decided a switch to scented plastic was in orderand that did the trick. Steve began hooking up regularly, and had it not been for their excellent casting skills we'd have never caught half as many reds. They zeroed in on nervous or jumping mullet and every time it paid off.

We finally returned to the dock late that afternoon with a few fish kept for dinner. I overheard Amanda asking her hubby if he thought they could put their boat in the water and fish a few more hours. There I was thinking she would be tired; how funny. Steve, you are a lucky man!

As for May, expect windy days with higher than normal water levels. Seek refuge in the back lakes or protected shorelines. Look for active bait and slicks. If you prefer artificials, throw in some scented plastics too. Live shrimp is never a bad choice.