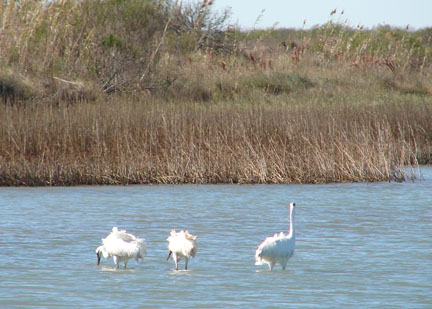 Whooping cranes will arrive in November, one of the many wonders of San Antonio Bay.
Cool fall winds indicate many things to different people. For some, the cooler breezes will mark the beginning of hunting season. Football fans will be cheering on their favorite teams while we fishermen say goodbye to the sweltering days of summer and hello to much anticipated fall fishing.

This is the time of year when the water begins to cool with the passage of mild frontal systems. The cooling water temperature triggers a feeding frenzy for trout and redfish making for awesome fishing around the shell reefs in San Antonio Bay and along the passes to the Gulf of Mexico. Let me explain how this can be applied to your fishing efforts and I also want to pass along a few tips to improve your success.

Each fall the waters of San Antonio Bay become the seasonal home to a variety of fish and crustaceans. After a long dry summer and scant rainfall in the Guadalupe River watershed the upper reaches of our bays can become quite salty. This is also the time of year when white shrimp head for the fertile grounds of the Guadalupe Delta to conduct their annual spawning. Following this centuries old migration of shrimp will be numerous saltwater fish species. Sand trout, redfish, sheepshead, black drum, flounder, and of course, speckled trout will all be present. The waters of the delta region will now be brackish and able to support all of the mentioned species.

The Guadalupe Delta's waters flow southward and spill out into the upper half of San Antonio Bay. The Guadalupe River pours out silt, nutrients and most important, bait, as they flow onto the shell reefs of San Antonio Bay. The river continues to mold the opening of the bay and contributes to the health of important grass beds that are extremely valuable to all marine life. These areas are where shrimp become most vulnerable as they leave the delta in fall. Many species of game fish take part in the seasonal bounty and congregate looking for an easy meal. Fishermen should have no problem locating a good bite in areas where the delta waters flow into the bay.

But the upper regions of the bay system will not be the only areas to concentrate your fishing efforts. Bull reds will be trolling the outer edge of the Matagorda Ship Channel jetties and can also be found in the surf as they too will be migrating so that they may spawn.

The spawning of redfish is really not too complicated. After the females release their eggs the males fertilize them. Once the eggs become fertilized they are now buoyant and develop into larvae, which are carried into the coastal marshes by tidal flows. It has been learned that redfish may reach breeding age as early as two years but typically they are three to five years old before they spawn. During this time they'll move toward the open Gulf and will join the spawning schools.

With all that being said.now you wonder, what are the best methods for luring one of these brutes towards your hook? Lucky for us the redfish are not picky eaters. They can be tempted with an array of treats but mullet and crabs tend to be at the top of their menu. You will also want to make sure you have replaced the old line on your reel. I prefer line in the 15-30lb-test strength range. Bull reds are built with a frame of broad muscles and have the endurance of an Indy racecar so you want to be prepared for the fight they can provide.

I can't finish this article without mentioning my all time eating favorite.the flounder. These flatfish will be warming up for their migration back to the deep waters of the Gulf of Mexico where they spawn. Of course the best way to get a quick limit is with a gig and lights at night but I prefer the excitement of the good ole' rod and reel method.

Fishing in cuts and inlets is imperative when fishing for flatties and an outgoing tide improves your odds greatly. Anything from fresh dead shrimp to a 3" Sea Shad will work. I opt for a Sea Shad in electric blue or root beer, both having a chartreuse tail and rigged on a 1/16 oz. jig head. Make sure to drag your offering slowing across the bottom of these inlets and it really helps if you allow the flounder enough time to ingest your bait before setting the hook. This technique may require a few practice "misses" before one gets the hang of it.

So whether you prefer to wade and cast for trout, troll for reds, or maybe seek a few flounder, now is the time. Fall patterns have put the odds of catching in your favor.