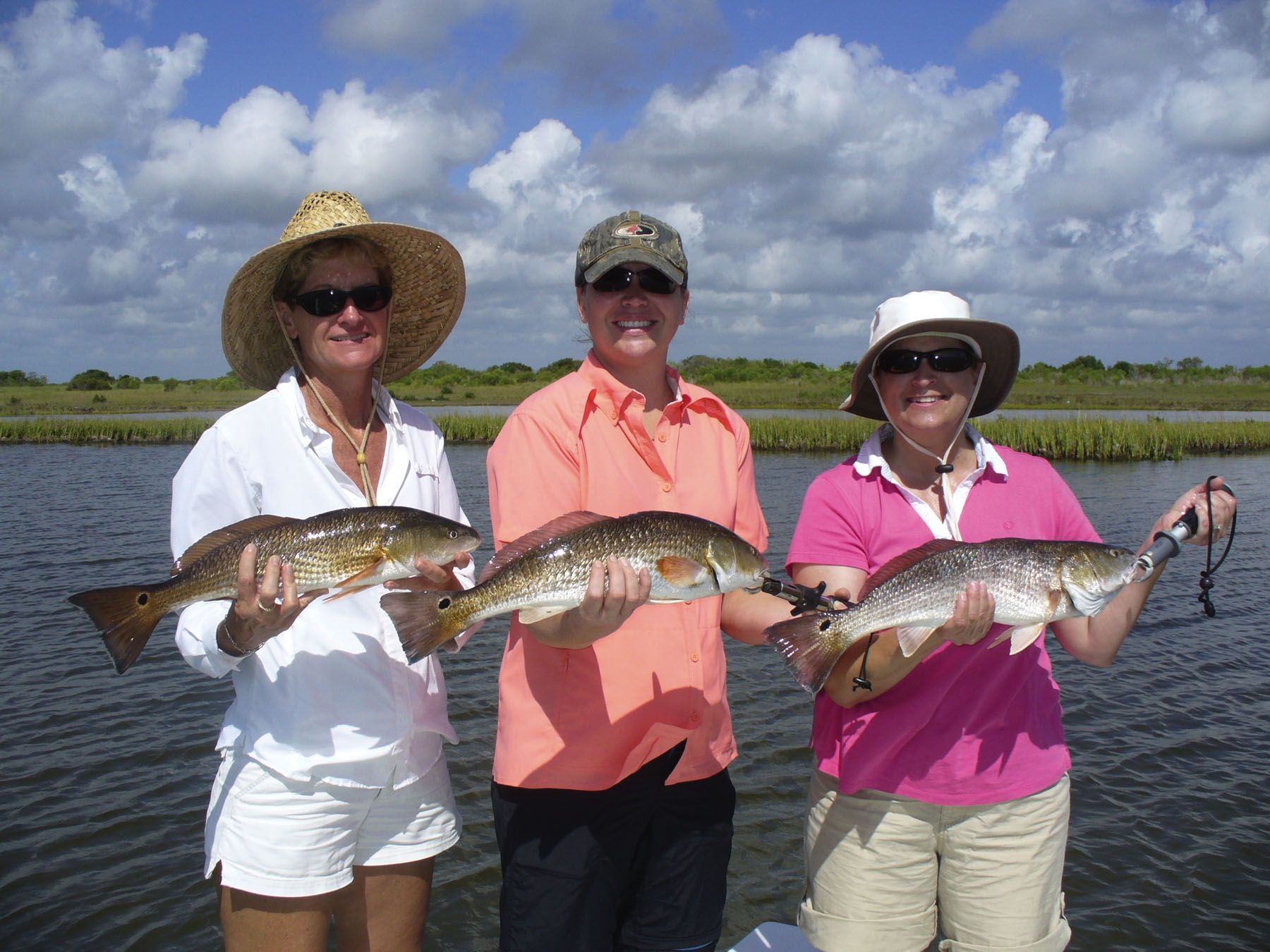 Sandy Reese, Sheri Schmitt and Roslyn Faust were happy anglers on a beautiful fall day.
I can't say enough about this exceptional weather. Fall is everywhere and the leaves are turning on most of our trees. Our bay water temperatures have dropped considerably and the once dense vegetation that inundated our back lakes is diminishing and making lure chunking much easier.

Many anglers are under the impression that fishing is only good during the warmer months and they couldn't be more wrong. I know some people are leery of colder weather, but if you think about it, we don't typically get the nasty, wet and cold stuff until January and February. This leaves November and December open to some fantastic fishing.

As the water temperature drops many of the smaller baitfish and shrimp that redfish and trout feed on will migrate to deeper waters. The decline in readily available food means the fish will not be as picky and more likely to gobble up whatever you have to offer, artificial or natural. If natural bait is your game you will be thrilled to know that pesky bait stealers like hardheads and gafftop will be moving off to deeper waters as well.

The sand shorelines of summer will produce less consistently during November as the water cools but the back lakes usually more than make up for the loss. San Antonio Bay's many reefs will hold lots of trout and reds but they are weather sensitive. Strong wind muddies the water quickly and sends us packing to the lakes on Matagorda Island, but as I said that's not a bad thing. The only downside is that most of the lakes have soft bottom and therefore tough to wade, better suited to drifting and fishing at anchor if you use natural bait.

Recently I have been able to get out to San Antonio Bay on many trips and have had some rewarding days. It takes a little reef hopping to find a solid bite some days but well worth the effort. Keying on bait activity is a must when deciding which reef to fish. If bait activity is scarce move on to another reef. If you're lucking you may come across some birds feeding up close to some of the reefs. Notice I said "up close to the reefs." Birds that work out away from the reefs are usually feeding above small trout, ladyfish and gafftop. The reef bite has been good on bone diamond and also salt and pepper 4" Assassin Sea Shads on 1/8 ounce heads. Even though the water temperature is falling we still see an abundance of stingrays in November so be sure to wear your ForEverlast stingray gear.

Back lake action has been steady on the Super Spook Jr. lately, especially the redfish pattern my dad jokingly calls his "coming and going lure" because the spot on tail resembles an eye. The Waker by Mann's Bait Company and a Texas-rigged Gulp Jerkshad in the sardine color are running a close second. The key to catching in back lakes is to focus on points and coves. The coves are often the best producers this time of year.

I can't finish this article without mentioning my all-time favorite dinner fish, the southern flounder. Flounder round out the big three for Texas anglers and I also want to remind everybody that the limit during November is two fish by rod and reel only, no gigging. This two fish bag limit is reduced from the normal limit of five during all other months and the possession is also reduced to two fish during November. These changes to the flounder limits are worth noting, especially for anglers making multi-day trips to the coast.

During the fall months, especially during November, mature flounder will be making their way to the Gulf to spawn. Fishing in cuts and marsh inlets is a good strategy when targeting flatties and an outgoing tide improves your odds greatly. Anything from fresh dead shrimp to a 4" Gulp Swimming Mullet in pumpkinseed will work. I usually rig my Gulp baits on 1/8 ounce heads. Fishing slowly along bottom will produce the most strikes but it can also mean snagging bottom frequently. Delaying the hookset for a second or two will produce more hookups. This can take a few practice "misses" before one gets the hang of it.

If anyone is interested, I have finally decided to sell my 2008 23-foot Explorer Attack-A-Flat. It comes with all the bells and whistles and is equipped with a 2008 200 Yamaha HPDI outboard. Give me a call or email for more information.