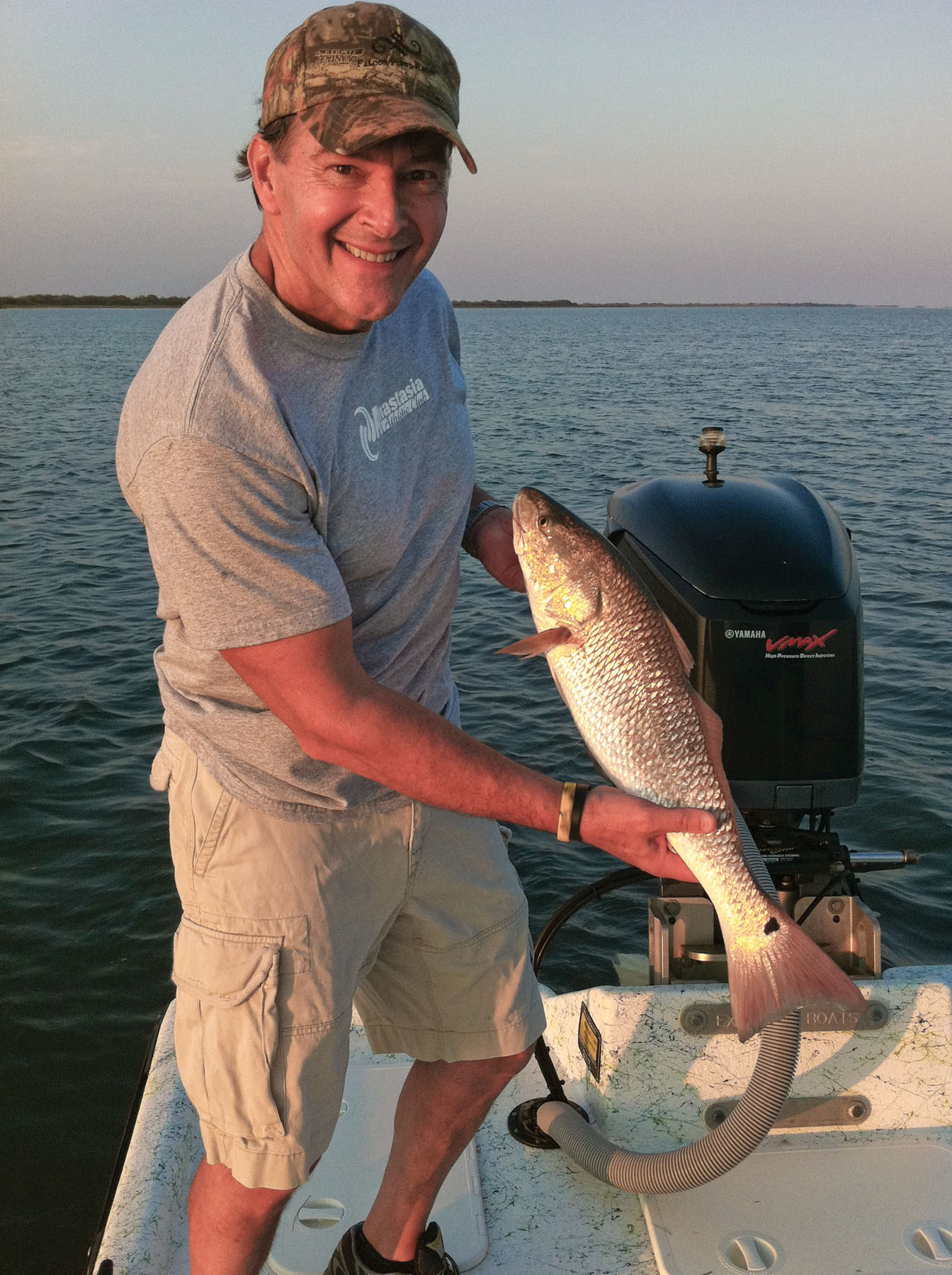 One of Craig Shular’s many reds during a recent visit to the middle coast.

Cool, crisp mornings have returned, and boy I am thrilled! This is my favorite time of year to fish, with fewer boats on the water and cooler temperatures. Many anglers have exchanged their angling gear for shotguns and rifles while others will be tied up with football. Fishing, though, stays at the top of the list for me.

November is when flounder migrate from the bays to the Gulf of Mexico where they will spawn and where some will spend winter, not returning to the bays until springtime. In the past, recreational and commercial fishermen took advantage of the migration, catching or gigging limits on a daily basis. Because of the declining populations, Texas Parks and Wildlife stepped in and imposed new regulations in an attempt to help improve flounder numbers. The daily bag was reduced from 10 fish to 5 for recreational anglers and from 60 to 30 for commercial fishermen. Exclusive to the month of November, recreational anglers are allowed only 2 flounder per day on rod and reel. Also, there is no gigging allowed during November, and the commercial season for flounder is closed. I have to say that since these restrictions started in September 2009, my fishing clients have been catching more flounder on a regular basis whereas a few years ago it was just one or two every so often.

Flounder will always be my favorite species to eat but that won't keep me from targeting speckled trout and redfish. With these cooler temperatures, the fish have been more aggressive and more willing to take our artificial offerings. I prefer to start my day throwing small topwater plugs like the clear Super Spook Jr. This smaller plug is easily maneuvered and usually gets big response from hungry fish. I know that throwing topwaters, on average, does not put as many fish in the box as soft plastics or bait, but the reactions you get from fish trying to inhale this lure is well worth the sacrifice.

Trout and reds will be moving off the sandy shorelines into the warmer and muddier back lakes. Lucky for us, as the water cools, the long strands of widgeon grass no longer dominate the water column as they did a few weeks ago, which allows us to fish these areas more effectively. I will still be using a weedless Texas rig most days, not so much to avoid the grass, but simply because I like the action of this setup better.

Back lakes such as Pringle, Contee, Long Lake, and Pats Bay will all be good places to start your day in November. Given a choice, I prefer water that is somewhat off-colored, not muddy, but certainly not real clear either. Any streaks or muddy spots in otherwise clear areas are definitely worth investigating. Color change is noticed best through a good pair of Costa polarized sunglasses. Bait is still a very important key so keep an eye open for mullet fleeing and scattering along windward shorelines a sure sign of predators on the prowl.

North wind will become more common making the SAB reefs in front of Seadrift a good option. There are many small unnamed reefs (some are not displayed on even the best bay charts) in this area that produce good numbers of trout. While typically smaller in size than the fish we find in the back lakes, they are usually more abundant and definitely fun when the catching is steady. The same holds true for fishing the reefs as back lakes – look for off-colored water and active bait. Finding a reef does not always mean you have found the bite. Reef hopping is sometimes necessary for steady action. Reefs that run along the Victoria Barge Canal will be hot spots if the water cools considerably or suddenly.

Black drum and sheepshead can also be found along these reefs and live shrimp is just the ticket for them. Redfish also tend to hang on these reefs, and I've never known a single one to turn down a juicy live shrimp, so hang on! And if you happen to see tails waving in the air over shallow shell, never automatically assume redfish; black drum do the tail thing too. Never cast directly at them though or they're likely to spook. Aim to the side and drag or drift the offering to them slowly.

Holidays will be here before you know it, so start planning an extended fishing trip now! Happy Thanksgiving and Gobble-Gobble!