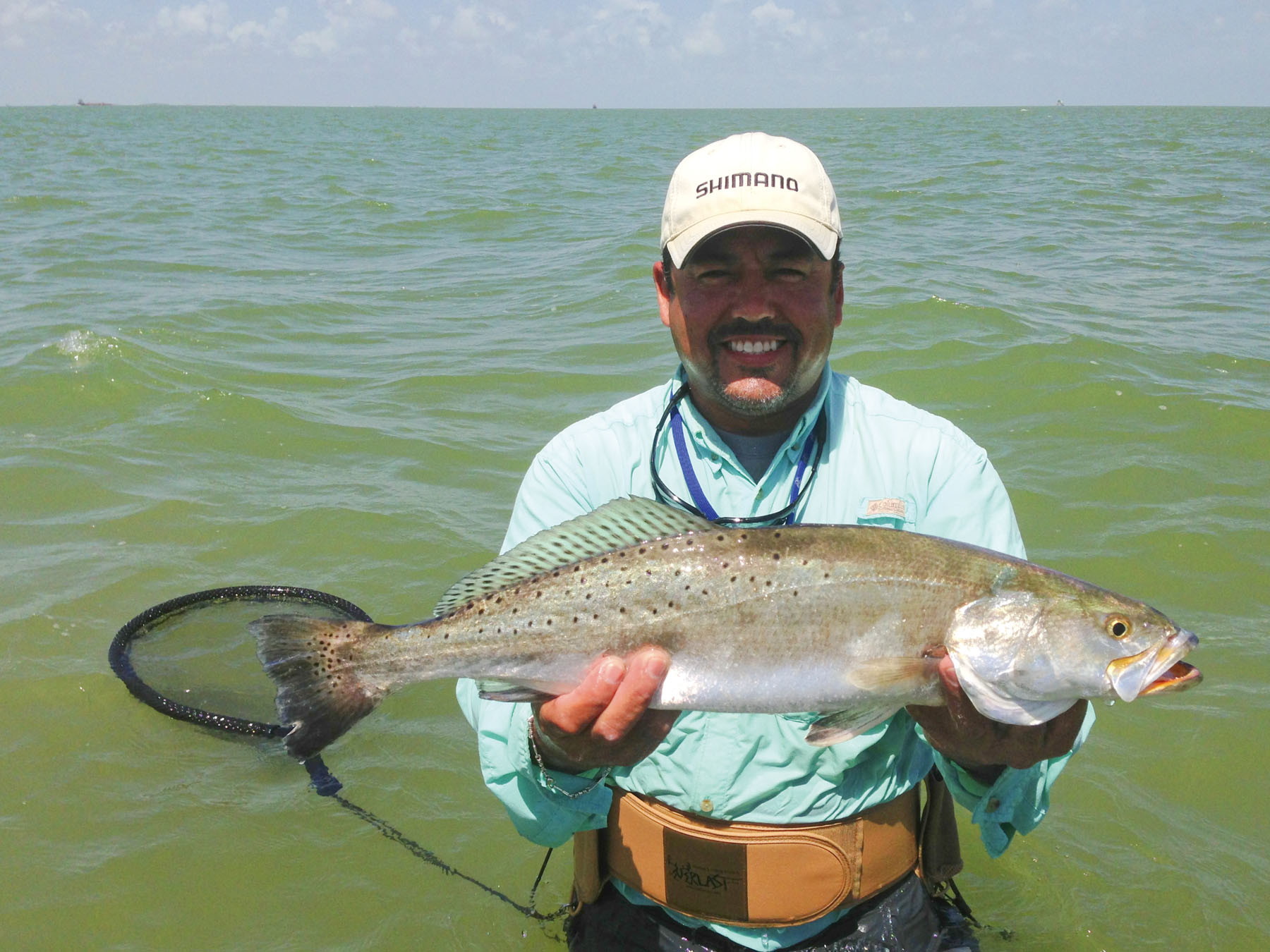 Leo Carrillo with a nice 25-incher from San Antonio Bay.
We look forward to September, very anxious for some relief from the extreme heat of Texas summer. Fall doesn't officially begin till September 22 but last year we were lucky to get our first "cool" front during the first week. I am so hoping that we will see the repeat of an early cool down again this year. Meanwhile, I will remain in summertime mode until the fish change their patterns.

July and August plagued us with unusually high and persistent southwest wind that forced water levels unseasonably low and turned our typically green bay waters very muddy at times. The choppy conditions kept me from visiting some of my favorite mid-bay reefs in Espiritu Santo and San Antonio Bay on a regular basis. The surf can be some of our most productive water this time of year and it too was mostly off-limits. I am hoping September will be a little more accommodating with calmer wind from our usual southeast direction.

Just like fishing in August, it will be important to start early. Arriving at your first spot thirty minutes to an hour before sunrise can really be beneficial. It is well known that fishing chest to neck deep can be advantageous during these hotter months but on many occasions this past month I found better numbers of fish in water that was too deep to wade, so boat fishing became the norm for me. This wasn't a problem for most my customers since the number of moon jellyfish in our area have been the most I have witnessed in years.

The heat affects everything and, just like us, the fish tend to get somewhat lazy when the temperature rises. It has not been unusual to arrive at an area and catch a few fish quickly then, almost like someone flipped a switch, no more bites. Moving often has been necessary lately to keep the bites coming. Also, don't be afraid to return to areas where you caught some earlier in the day and give it another go.

Enticing these lazy fish to take a lure can be difficult and that's when I turn to scented plastics and/or natural baits to fill the gap between catching and simply trying. When fishing the reefs or dropoffs try to bump your bait off the bottom slowly. Remember the main reason these fish are in the deeper water is to help them cool off so you want to make sure you are presenting your bait where the fish will be most likely to take it. Since you will no doubt be nicking your line from time to time on the shell, be sure to check your leader often and re-tie as necessary.

Redfish continue to be found in greatest numbers in our back lakes. Grass is thick in many of these areas so casting to the sand pockets is your best option. Weedless setups are a must when fishing the lakes that are really grassed up. If you are not familiar with a Texas Rig do yourself a favor and learn how to tie one. This has always and continues to be my number one producer when drifting the lakes for redfish. Here lately our reds have been scattered singles or small bunches but I look for them to form larger schools after a few passing fronts.

I know I sound like a broken record with this next topic but it is so worth repeating. Bait and/or birds are still very important when deciding on which reef, cove or part of a shoreline to try. Subsurface bait is good but I really get excited when I see fleeing mullet. I am not talking about those lazy jumpers, I look for the ones that jump frantically, just barely clearing the surface three or four times. This is about as good as it gets when looking for signs of feeding fish. You would be surprised how many anglers I get that don't know to cast toward the spot a fleeing mullet first appeared.

On a side note, I have noticed a lot of boaters getting "hung up" in Fulghum's Cut (aka Charlie's Cut). The piling markers on that channel are way out of date and no longer indicate the true border of the channel anymore. If you are new to the area or haven't been there in awhile you should know that the cut is filling in steady from the Lagoon side. The deepest remnants of the old channel can usually be seen in the daytime but not under low light conditions... proceed with caution!