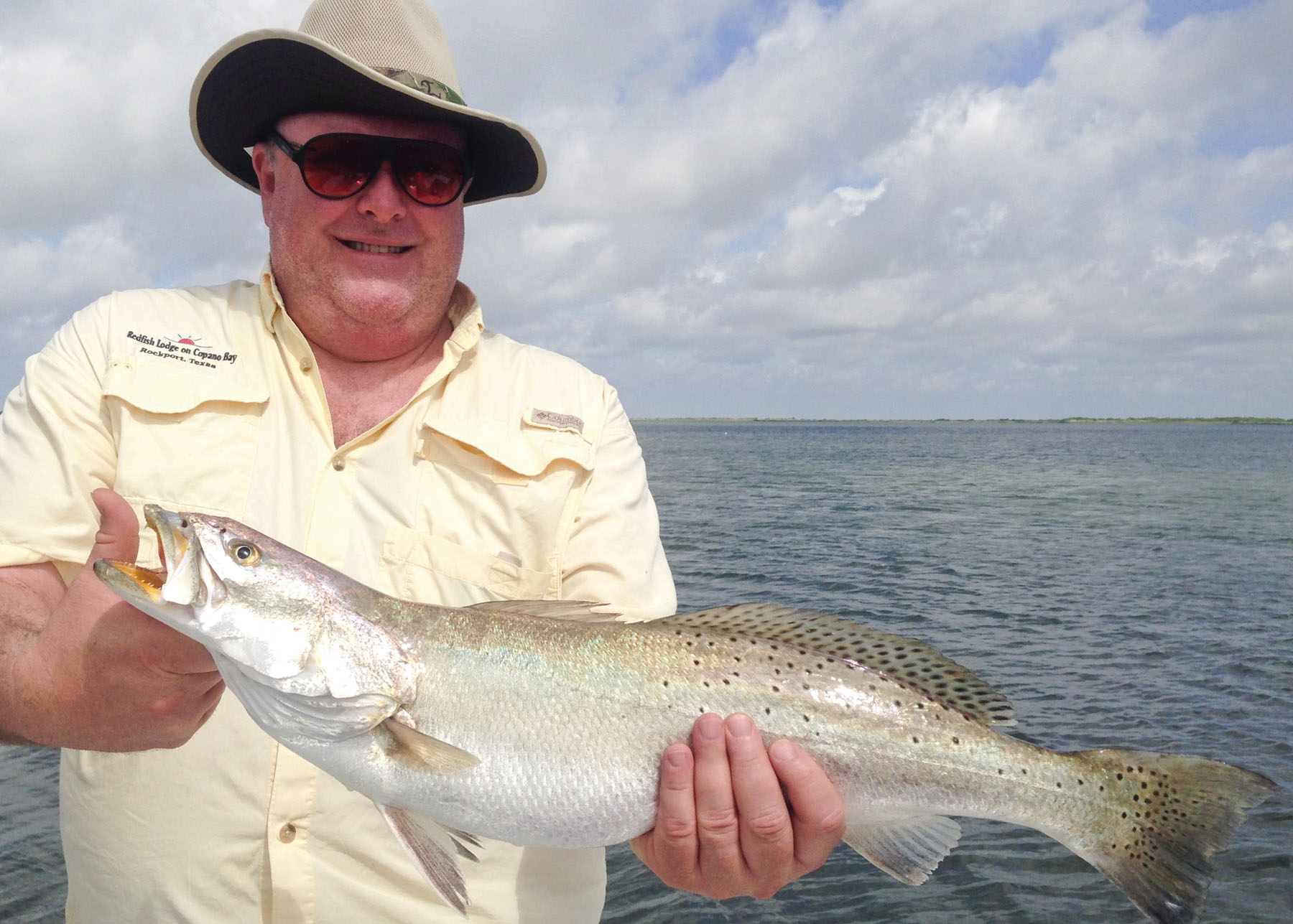 Don Bulloch with a healthy summertime trout released to fight another day.
Fishing here on the Mid-Coast has been unusual to say the least. Extremely low tide levels and unseasonable southwest wind have left us with off-colored water. And if that wasn't crazy enough, good Ol' Mother Nature blessed us with a couple of fronts that actually helped change things up for a while. Although our water levels didn't rise much the clarity certainly improved. Lower wind, some days, allowed anglers to take advantage of some much needed surf action. So what can we expect for September? That all depends on what the weather brings us. (You had to know that was coming.)

The first half of September will remain seasonably warm, the earliest fronts probably won't arrive until maybe the third week. Whenever the wind allows, anglers need to be headed to the surf. I know I sound like a broken record every summer but the surf can deliver some of the best action during the hotter months. The fish there tend to be quite aggressive and typically of better quality than those of the bays, redfish included.

Now with all that being said, the surf can still be a tricky area to fish. The wind needs to be no greater than 5- to 10 in order for shallow water boats to access and anchor safely. And while the surf in general can be a hot spot, you can't just stop anywhere and expect success. The signs, as always, will be active bait and bird activity. I mention bird activity and everybody instantly thinks of birds wheeling and crashing but remember that inactivity is still a good clue. Numbers of pelicans and gulls resting at the water's edge can be an indicator that lots of fish are in the immediate area.

If you have some bigger baits you've been dying to try, the surf may be just the place. Soft plastic in the 5- to 7 inch range often get slammed by the larger, more aggressive trout we find there. On larger topwaters, be prepared to lose a few to Spanish mackerel and smaller sharks; heavy fluorocarbon leader helps... sometimes.

When fishing from the boat, I typically anchor just inside the third sand bar to be able to reach the second gut. If it is reds you're after, consider anchoring in the second gut so you can cover all of the water right up to the beach. If you decide to wade the surf, I use a long stringer, and never with a tight knot. If a shark hits your stringer you want him to be able to take it!

When the surf gets a little too choppy I will be in the bays wading shorelines and guts for the most part. Lately, Cotton and Green's Bayou has been producing some decent catches while wading the sand bars and deeper guts. Channel spoils in Matagorda Bay are another good place to try. Remember that when fishing near Gulf passes the tidal currents influence feeding to a far greater degree than further up in the bay.

Closer to Seadrift, San Antonio Bay reefs are producing decent trout and redfish action. I have noticed recently that the busy boat traffic seems to be pushing the better quality fish right up against the shorelines, even in the hottest part of the day. Now I'm not talking about quantity, but definitely for quality.

Just the other day, while sight-casting to reds in less than a foot of water, I had what looked like a 29+ trout swim right past me. And as luck would have it, while ripping my weedless Die Dapper back to try for a shot at that speckled beauty, a 26-inch red slammed my lure and the sweet possibility of playing with that great fish was lost. The red took a while to land and I never saw her again.

If you do decide to wade close to the marsh sloughs you need to keep an eye peeled for alligators. I have had some up-close and personals on a couple of occasions recently that left me trembling in my ForEverlast RayGuard boots. Alligators are masters of disguise when lying close to grass lines. It's easy to get caught up sight-casting on a shoreline and walk right up on one of these beasts (like I did). And while these prehistoric-looking creatures usually just want privacy, they tend to get quite curious when they see or hear splashing fish at the end of a stringer.