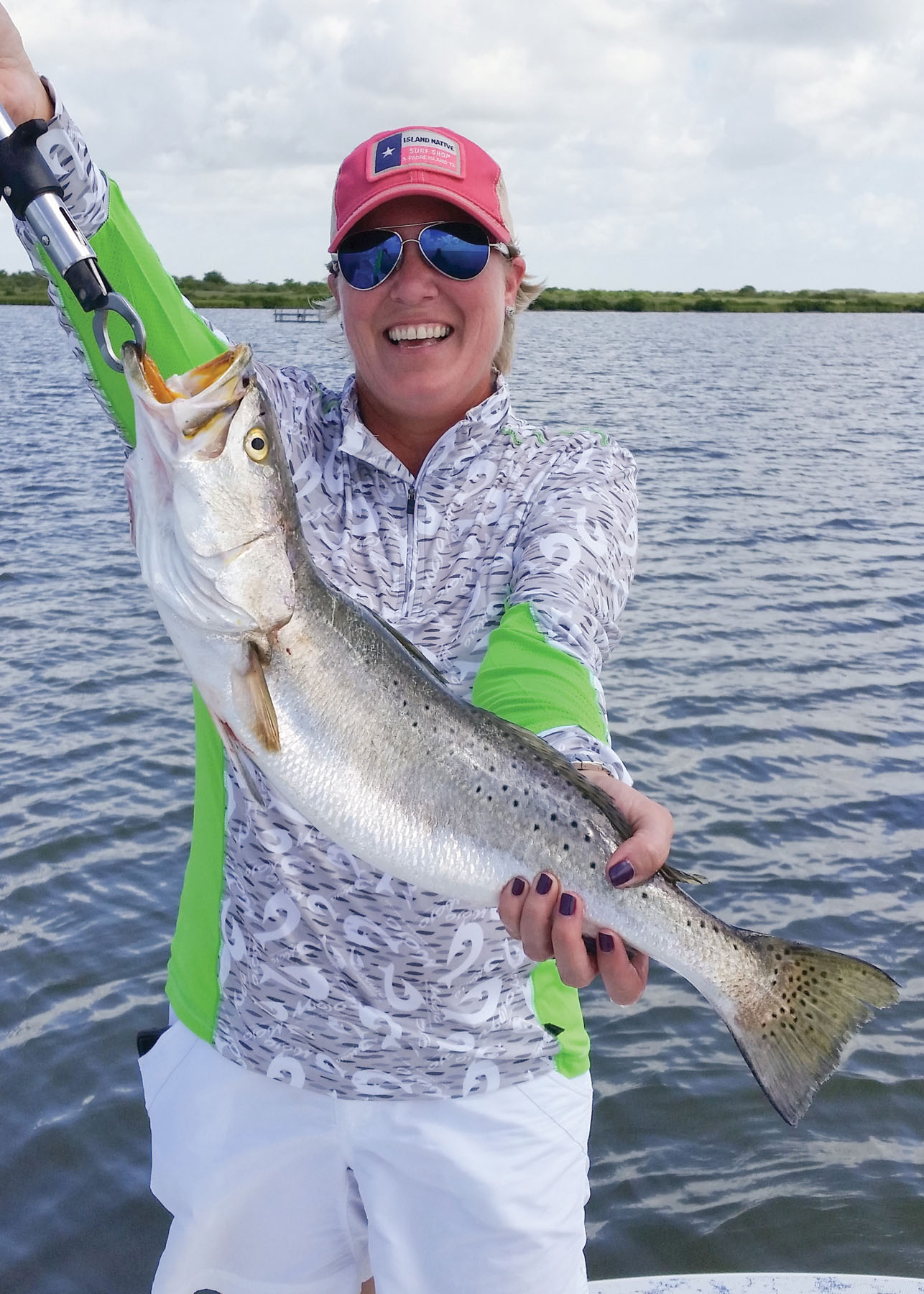 Becky Terpstra caught this beautiful summertime speck on a recent outing with Capt. Gary.
The waters of San Antonio Bay and surrounding areas are finally starting to return to near normal salinity level. I personally have not been able to fish since the early part of June. After seven days of charters I finally had a day off and was looking forward to relaxing and getting a manicure and pedicure. Gary said he would be pre-fishing an upcoming redfish tournament and would really like for me to come along. So much for relaxing. But since we had not fished together for some time, just us, I thought, "What the hell, it'll be fun."

After retrieving my wading gear from my boat I realized I had forgotten my favorite sunscreen lip balm and climbed back up again. Exiting the boat my right foot slipped from the trailer fender and somehow landed between the tandem tires. Needless to say it was not a pretty fall and the pain in my knee was pretty intense. Swelling soon set in and I knew the outcome was not going to be good.

After an MRI it was discovered I had ruptured my ACL and torn my meniscus. It has been seven weeks since reconstruction surgery and my surgeon told me not to expect to return to guiding until the end of the year, possibly early next year. So here I sit fishing vicariously through Gary. Funny thing is we both had knee surgery on the same day but luckily Gary's knee was a quicker recovery. He had a torn meniscus along with some arthritis that needed to be cleaned up. He was out of commission three weeks but is now going full steam. Poor guy rarely gets a day off because when he's not fishing with his clients he is stepping up to help accommodate mine.

So now that I've given you a heads-up on why you haven't seen me on the water lately, let me give you an update on how the fishing has been (through Gary's experience, of course).

Fishing around Seadrift/Port O'Connor has been really good. Gary has had some of the best trout "catching" he has seen in years. At this time every year, weather permitting, the surf is where most of the action has been. Not only has he been catching good numbers of trout but the size has been very impressive. Catching juvenile trout has not been as common as last year. I remember last year having to leave many areas, covered up with too many small fish.

Most of the trout have been in 3- to 6 foot depths. Unless you are boat fishing, many wading trips are spent fishing to chest-deep and I look for this pattern to continue until we start to see cooler temperatures.

West Matagorda Bay has been producing great catches when the surf has been too rough to venture out. This bay system has been yielding plenty of trout action over grass beds and sand. Wading the shoreline near Green's Bayou has been good most days but don't be surprised if you lose a few to pesky sharks.

When fishing West Matagorda I pay closer attention to tide movements than when I fish San Antonio Bay. Fish here are what we call "tide dependent." Meaning that because they are occupying the waters that are close to the passes to the Gulf, the more they become dependent on tidal movement when feeding since these movements provide and move their food source. As the tide moves in and out it moves the bait to the predator fish. The currents produced by the tides provide the best opportunity for catching fish. When the tide is slack the fish tend to become inactive. So be sure to check your tide charts when you plan on fishing this bay system (and also the surf.)

Espiritu Santo Bay has also been holding its own for steady catching. Fishing over grass beds and casting to open sand pockets have been the ticket when fishing early in the morning. Nice-sized trout and redfish use the grass as cover ambushing bait that happens to cross into the pockets. I usually like to start my wades close to sloughs that connect back lakes to the bay. These shorelines have been most productive during the week days and tend to slow down quite a bit when weekend boat traffic picks up on Friday.

Fall is just around the corner and I can't wait to see those seasonal changes take place. It will be a whole new ball game by then. Hopefully, by October or November I can return to the water for some short, fun trips. Wish me luck and a speedy recovery.