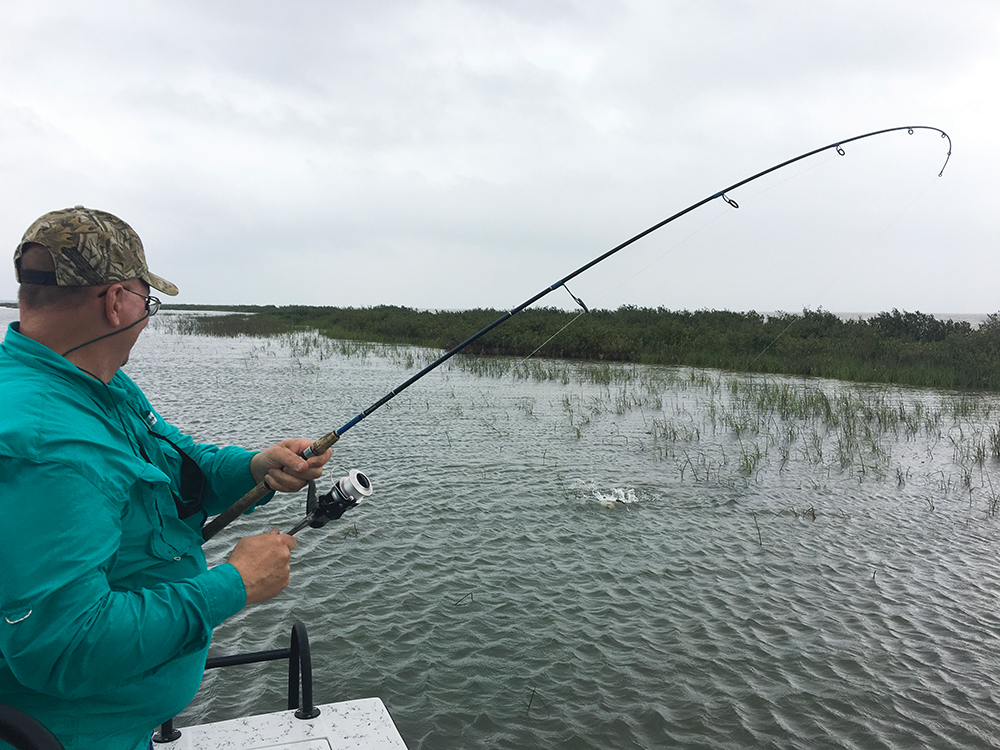 Higher water levels allow the redfish to roam up into shoreline grasses.

Winter on the Middle Coast has been very mild so far. Spring will begin officially with the Vernal Equinox on March 20; seasoned anglers however tend to say spring begins March 1, and I agree. I would normally be talking about bone-chilling cold lingering forever and how it can complicate fishing patterns, but with the mild winter we have experienced I will instead discuss what to expect during the early arrival of spring this year.

Lots of positives over the last few years lead me to believe we could be in for an epic spring fishing season. First – The five trout limit has been in effect since September 2014 and it appears the fishery is very healthy. It’s a no-brainer; take fewer and you’ll have more. Second – I almost want to bite my tongue mentioning this, but we haven’t had a fish kill from red tide since 2010-2011. Third – Another mild winter means we experienced no fish kills due to freezing weather. Fourth – No floods or serious droughts; salinity levels were normal throughout 2019, which contributes greatly to healthy fisheries.

No surprise that March will be windy – it always is. Fishing guides sound like broken records in their complaints; it’s the same song every year. We complain not because high winds shut down the bite; we complain because the wind dictates where we CAN fish, which so many days is not where we would CHOOSE to fish. The wind is cruel to everybody, so anglers stack along protected shorelines and cram into back lakes. Pack your patience and remember the Golden Rule.

Finding slightly off-colored water we always look for will not be a problem. The problem most days will be water with too much color – see also: muddy. Fish can sense vibration through their lateral lines, which helps them zero in on spastic and wounded baitfish. In heavy surface chop and murky water conditions I recommend noisy baits and baits that give off lots of vibration to get their attention.

Popping corks can be great tools under such conditions. I prefer the Bass Assassin weighted Kwik Cork with the length of my leader adjusted for the depths I am fishing, usually about half the depth when fishing shallow back lakes. The paddletail of the 4-inch Bass Assassin Sea Shad rigged under a cork creates vibration of its own while the chugging of the Kwik Cork calls them in to investigate. Scented baits add even more attraction.

If you are a topwater enthusiast, like me, then get ready because this is the time of year when topwaters really begin to shine. I have always said, by far, I believe soft plastics catch more fish on average, but only because fish are more likely to play with a topwater than actually try to eat it. Another downside of topwaters is the tendency for fish to get loose after being hooked. Foul-hooking is a big part of this; they weren’t trying to eat it, they got hooked while swatting or body slamming it. But, man oh man, how I just love the blow ups and slurps.

You need to make a bigger statement with your topwaters in choppy springtime surface conditions. I usually opt for louder plugs, even downright obnoxious to make that bigger statement. Bomber’s Badonk-A-Donk HP, Mirrolure’s She Dog, and Rapala’s Skitter Walk are all good choices. And don’t forget topwaters have better action if they are attached to your line using a loop knot.

My go-to areas during spring will almost always be the back lakes. We will have seasonally higher than normal water levels in springtime, so venturing out to the farthest reaches on Matagorda Island will be possible this month. I have already started seeing good grass bed development in some of the backwater areas and these become havens that attract lots of baitfish, juvenile shrimp and crabs. We normally see seagrass at this stage about a month later than we have observed this year.

Gary and I will be attending the 45th Annual Houston Fishing Show at the George R. Brown Convention Center from March 4 through 8 in booth 624. Feel free to stop by and talk fishing, ask questions, or book a trip. There will also be some of the latest and greatest fishing tackle on exhibit. If you’re contemplating purchasing a new fishing rod, Waterloo Rods will have all their offerings on display. Pick one up and give it a shake to get a feel for which rod is best for you. If you are considering a new boat there will be some beautiful Shallow Sport Boats to drool over as well. Hope to see y’all there.