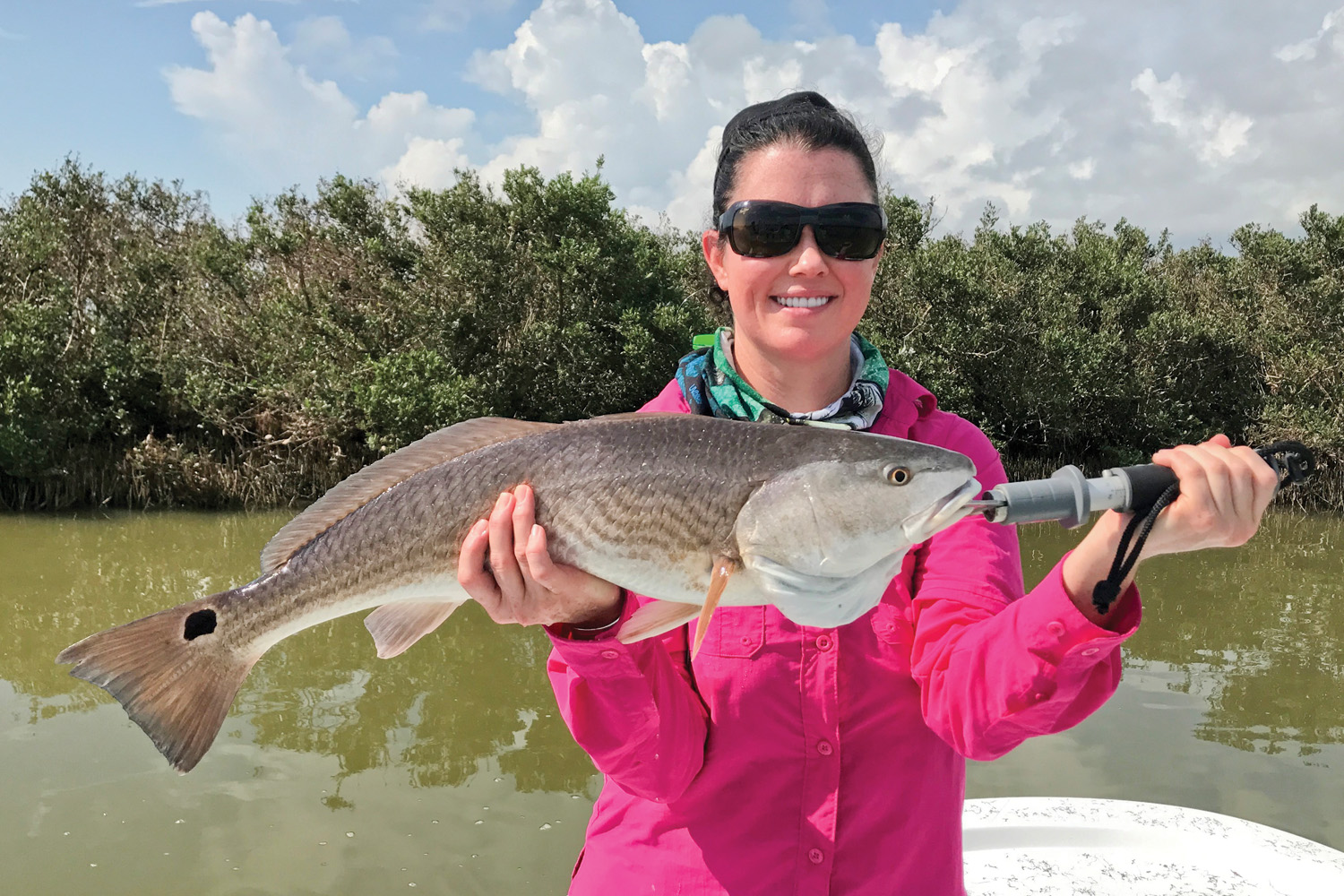 Sandy Ward was thrilled to reel in this backwater redfish!

The heat of summer is finally in the rear view mirror and cooler fall temperatures have arrived. I always look forward to November. Thinking back, I remember looking forward to fewer boats on the water due to deer season, but that has changed. Deer leases have become so expensive that many people have invested in bay boats instead. Owning a boat is a great way to enjoy the outdoors year ‘round and a good way to get family and friends together as well. So, while boat traffic will be a little lighter than summer, we are beginning to see more in the fall than we once did. That’s OK, though, the cooler weather still puts a big smile on my face.

I probably sound like a broken record but fall fishing is by far my all-time favorite. The bays really come alive as the water begins to cool after the long and hot summer. Baitfish are more active and predatory fish are more aggressive in their feeding patterns. We will also see more bird activity as white shrimp migrate from the estuaries. Juvenile white shrimp inhabit low-salinity backwaters and marshes from early summer until fall. As the first northers arrive, they begin migrating on the falling tides toward the gulf where they continue to mature and spawn.

As the shrimp begin migrating through the open bays, they attract lots of attention from many species of predatory fish. And, when these fish push them to the surface, you find swarms of gulls wheeling and diving to pick them off. Clusters of birds just sitting on the water are also a good indication that there are fish in the area, maybe just not as concentrated. The feeding frenzy tends to be at its best during early morning and usually subsides by midday.

Finding a flock of birds working aggressively, it is best to motor upwind and stop far enough away to avoid spooking the fish that are feeding below. Better yet, if your boat is equipped with a trolling motor, use it rather than your outboard to position the boat within casting distance.

My number one setup for fishing birds is rigging with popping corks or Mauler style floats above 18-inches of 20-pound leader, attached to a 1/8-ounce jighead. Soft plastic lures are your best option, simply because you get the same results as using live shrimp without having to refresh your hook with every fish you catch.

When fishing in a feeding school of trout or redfish, I do not believe color is as important as when searching for fish that are scattered along a reef or other structure. But, to be safe, I prefer to keep my colors on the natural side. Favorites over the years have been 5-inch Saltwater Shad Bass Assassins in Salt and Pepper Silver Phantom and Pumpkinseed-Chartreuse.

It usually doesn’t take more than a few pops of the cork before you are hooked up. Many species take advantage of these migrating shrimp so don’t be surprised when you catch a little bit of everything under the birds. And yes, gafftop, skipjacks and other less desirable fish will be there, too. Be patient and take the good with the bad.

You are also sure to find smaller trout. I have seen anglers handle these little guys very roughly but please remember they are next year’s keepers and have potential to become trophies. I prefer to use a de-hooking tool or longnose pliers and avoid grabbing with my hands as much as possible. A quick flip of the wrist once you’ve secured the hook with de-hooker or pliers is usually all that is needed to get them back into the water without injury.

On windier days when it is difficult to fish open bay waters, you will find me venturing into some of the back lakes for protection. The grass that was so thick in summer has finally become much thinner and we can now aim for sandy potholes and other structure without hanging up. Another reason I love fall fishing.

Hurricane Harvey created some new shoreline cuts and washouts, but keep in mind most are quite shallow and not navigable. Unfortunately, Charlie’s Cut did not benefit during the storm. It is still very shallow and will be even shallower as tide levels begin to recede later in the season. You can still get through with a shallow-draft boat but the channel is very narrow. During late-summer, many boats ran aground where there was plenty of water as recently as a year ago. I would advise seeking advice from other boaters at the dock if you are not familiar with it.