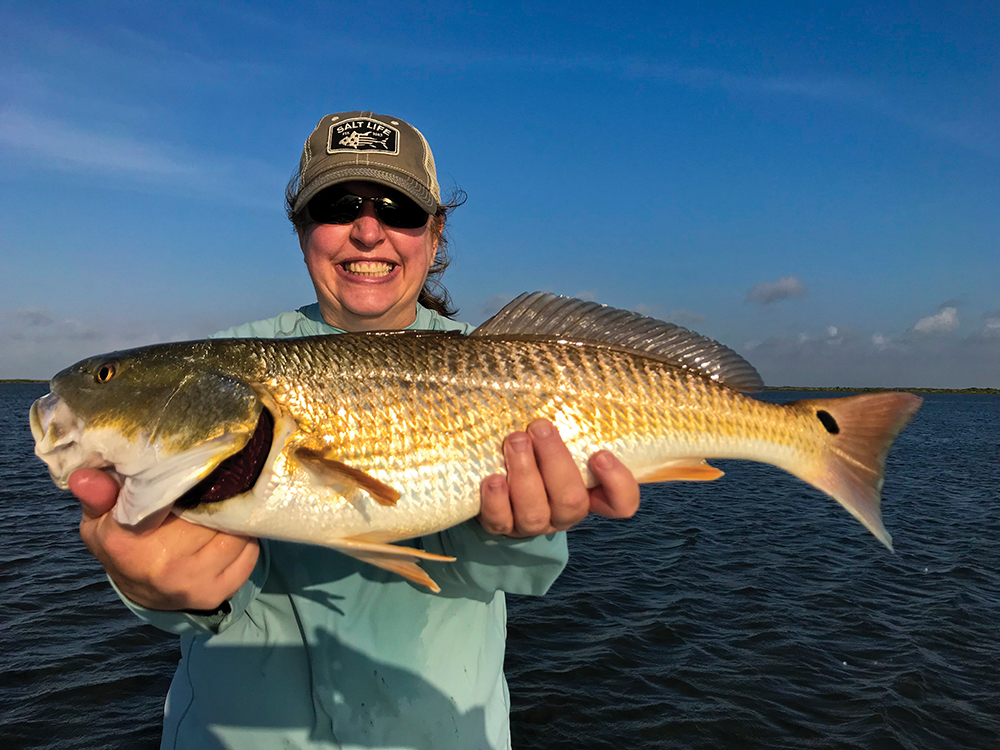 Jana Hermes’ smile says it all!

We have thus far experienced a warm start to the fall season here on the middle Texas coast and I am anxious for cooler temperatures to bring relief from the heat and humidity. Even with thirty-plus inches of rain the past several weeks our water temperatures continue to hover around 80° but hopefully that will change with a couple cold fronts. Water temperatures in the low- to mid-70s range always gives us even better fishing in the fall.

I am also eager for reduced boat traffic as diehard deer hunters exchange rods and reels for rifles in November. Now some of you are probably thinking, “Yeah, but then you’ll have duck hunting traffic to deal with.” I don’t worry about those crazy duck hunters, my husband included, they leave the boat ramp way before the sun comes up and this in itself makes getting on the water easier and more enjoyable.

As the of late, sandy shorelines and guts have been holding decent numbers of redfish and trout but the areas that have been producing the best numbers results have been the reefs in San Antonio Bay. This bay has really come alive over the last few weeks with all sorts of baitfish. It seems almost everywhere I go I am seeing schools of shad, finger mullet and lots of shrimp. I haven't witnessed this much bait activity since spring. Most encouraging are the numbers of finger mullet we are seeing.

Since the beginning of the year I have had many discussions with other area guides concerning the general scarcity of finger mullet. It almost seems as if Hurricane Harvey might have disrupted their normal production cycle. I know it may seem unimportant to some but every species of game fish feeds and depends on mullet all year long, unlike shad and shrimp which are only seasonal and disappear during winter. Ample year-round food sources not only help sustain mature game fish but also play a key role in enabling spawning age specimens to remain in peak health as they carry out their annual spawning duties.

With all that being said, I routinely use the presence of bait as a good indicator of where to concentrate my fishing effort, but when the entire bay is brimming with bait it can be perplexing. So – keep in mind that when this happens we must focus on bait activity more than merely being present.

Look for bait of suitable size that appear to be fleeing predation; two or three frantic skips across the surface, not just lazy rolls or belly flops.

I also consider dolphins patrolling near mid-bay reefs a potentially good sign. Dolphins love speckled trout and this can be a sign that lots of trout are also present. Some may see dolphins as the Big Bad Wolf but, honestly, they have helped me more often than not. Yeah, we’ve had a few “too close” moments but in general our San Antonio Bay dolphins do not pose safety concerns. What I like is the way they often herd trout into tight schools against the reef within easy casting distance.

Always remember to fish both sides of oyster reefs. Some reefs may have a gradual taper on one side but the other side may drop away very suddenly, so use caution when wading and move slowly if you are not familiar with the reef you are fishing. More on fishing both sides; over the years I have found it's either one side or the other that produces a steady bite but rarely both sides. Fish each side thoroughly whether wading or drifting before moving on.

As usual for this time of year we are experiencing bull tides. The rise in water levels will begin to decline with each passing front; the harder it blows from the north the more the water level will drop. During this time of water level decline, I recommend focusing fishing efforts outside of sloughs and small drains that can be found along shorelines of our major bays. Water leaving the marshes and back lakes will carry a smorgasbord of forage for hungry game fish.

Thick seagrasses that have flourished in area back lakes the past several months have finally begun to recede and thin seasonally as water temperatures cool and days grow shorter. Many of these lakes were almost impossible to fish a month ago because the submerged grass was just too thick to work soft plastics and floating grass greatly hampered the use of surface plugs. If we happen to get a few strong cold fronts in November that drop the temperatures drastically, our back lakes will again become go-to spots for both waders and drifters.