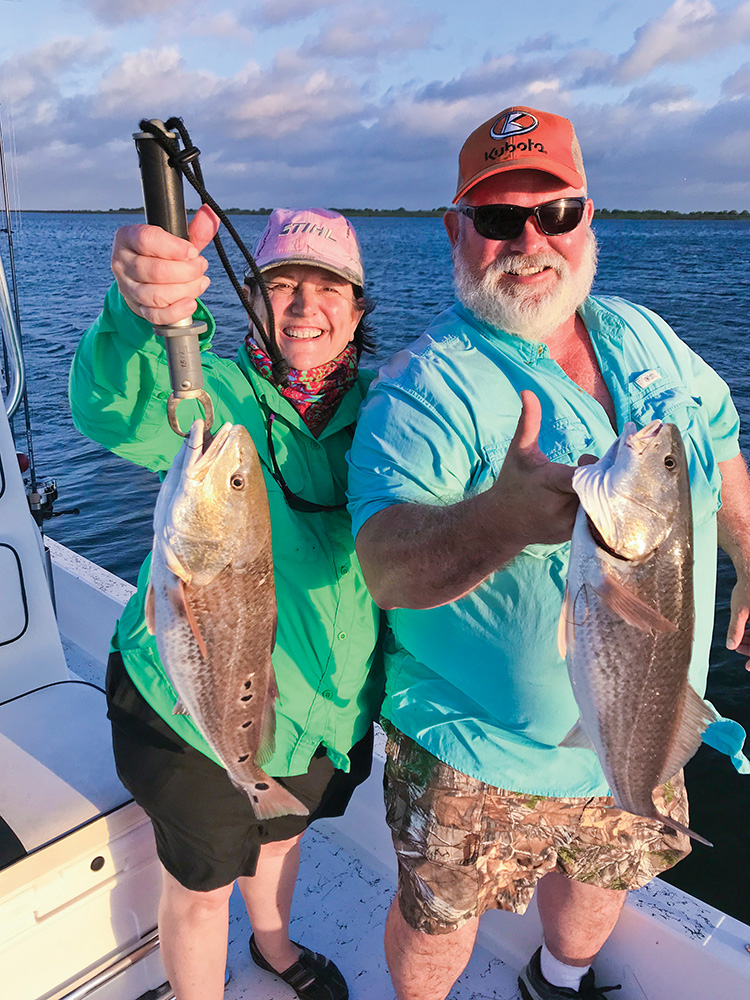 It is always a great time when I get to fish with Glenn and Jill Hollis.

Fall is just around the corner and I can almost smell it in the air. Not really, but there were a few days recently when we had some cooler and drier north breeze that teased my imagination. Sadly, the extreme dog day heat and humidity returned all too soon. Other than scorching temperatures over the past several weeks the fishing hasn’t been too bad. We had plenty of catching going on for the most part with only a few less than stellar outings.

Westerly wind has been a nagging problem many days this summer. Typically our prevailing summertime winds are from the south and southeast. Occasionally during prolonged periods of high atmospheric pressure we get some wind from the west but not nearly as many as this summer. Westerly winds push the water of our middle-coast bay systems out into the Gulf, leaving us with lower tides and dirtier water. A few days of this is no big deal but when it lingers for weeks the fishing can get pretty tough. Luckily, that weather pattern has passed and we’re back to normal tide levels, better water clarity, and more consistent fishing.

You can pretty much bet that any stretch of calm days in summer will set the gulf surf on fire. The fish you find gulf-side are much more aggressive in their feeding habits than the trout we catch in the bay this time of year and we have enjoyed many action-packed days catching both trout and redfish. Trout tend to linger in the deeper second gut while the redfish seem to favor the shallower first gut, sometimes within a few yards of the sand. Keep in mind that redfish will become the predominant surf species during September; speckled trout numbers will begin to decline with the arrival of the first cool fronts, usually during the second half of the month.

As much as I enjoy the surf, I do not get to fish there as often as I would like due to some clients suffering seasickness even in the gentle swells associated with near-flat surf conditions. No matter how good the catching can be out there, one person on the boat trying their best to sell Buicks puts a total damper on it for everybody.

Bay fishing has been really good of late but we definitely see a difference in the size of the trout. Most fish you catch in the surf don't require measuring whereas fishing San Antonio Bay reefs requires sifting through varying quantities of undersize to find nice keepers, some days more than others. Also of note, bay trout do not fight as hard as similar size surf trout. Maybe it’s the cooler water or just growing up in a tougher neighborhood.

Most reefs in San Antonio Bay have plenty of mullet on them lately but the best producers will also have a few shrimp skipping on the surface. Our best catches have been coming from clusters of small reefs rather than large single reefs in the middle of the bay.

The redfish bite has also been very good with small schools scattered along sandy shorelines of Espiritu Santo and San Antonio bays. Since our water levels are back up and with more consistent SSE breezes, most of the redfish are holding close to shoreline grass and grassbeds, feeding on small shrimp, mud minnows, and tiny crabs.

Quite a few days recently I have come across tailing reds and oh what fun that can be. Even though tailing reds have a reputation for crushing lures I still recommend scented baits to make the most of the encounter. Tailing reds are looking down and rooting the bottom for their prey, so you have to get the bait close to get their attention. However, the last thing you want to do is spook them by casting a bait right on top of them or plopping a topwater too near. When one bolts they all go.

With a scented bait you can cast slightly right or left, let it fall to the bottom and just wait for them to pick up the scent. Fishing this way can allow multiple hookups from a school before they scatter.

I’m not expecting any major cooldowns anytime soon, so my guess is that summertime patterns will continue through much of the month. The areas and tactics I described will remain on my go-to list for several more weeks. When that happens I will be talking more about the back lakes, but until then, start your day early, stay hydrated, and always be considerate of other anglers no matter the situation.