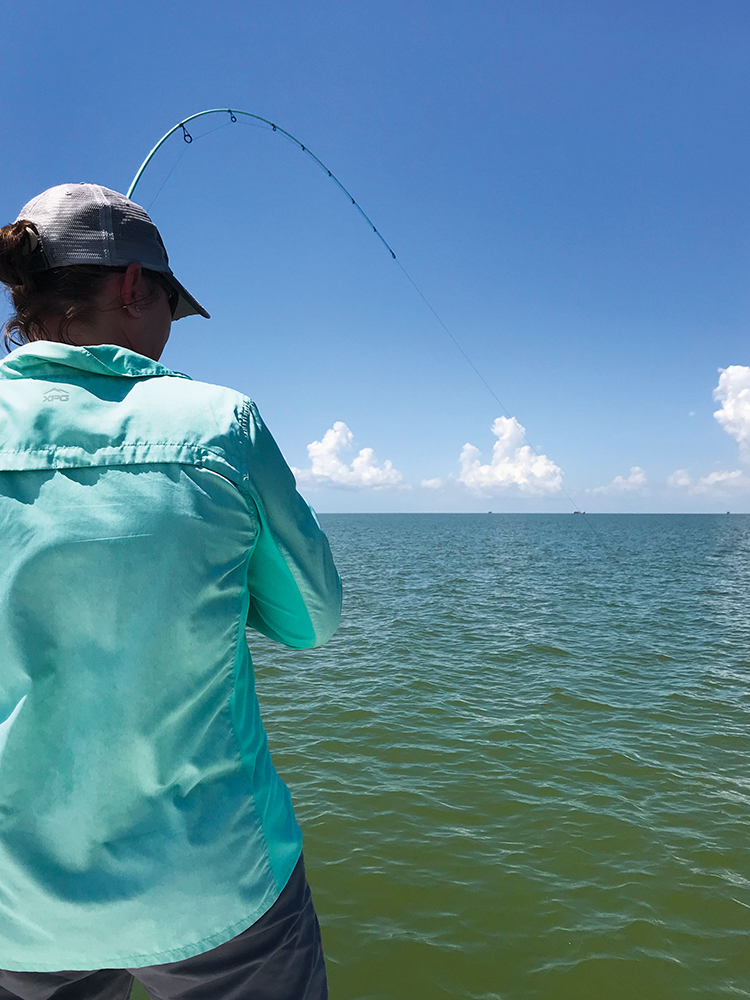 Sherri’s big redfish showing her and her Waterloo Salinity rod no mercy during a forty-five minute battle.

I think we can all agree that 2020 has been a crazy year and it doesn't look like the rollercoaster ride will be ending anytime soon. While the powers that be seem hellbent on dividing our nation, one thing that still seems to bring people together is fishing. Never in my 18-year career have I felt more needed than I have this year. My schedule has been full since mid-April with clients that are begging for some saltwater therapy and I am happy that I can help them out.

With so many people working remotely and many schools teaching online, the normally less-crowded weekdays have become almost as crowded as weekends, but honestly the catching has still been consistently good due to mostly favorable wind patterns.

I try to teach my anglers all that I can while aboard 24' Shallow Sport and hope they will be able to use those tips while fishing on their own in the future. On a recent trip with some of my favorite clients, Mark and Sheri Schmitt, they learned firsthand how to be observant to the water, not just when you're fishing, but also when you're moving from one spot to the next. It was while we were moving from one location to another that I noticed some “nervous” water. Now mind you this day was super calm so, honestly speaking, the nervous water was obvious to me but not to Mark and Sherri. As I came to an abrupt stop they stood up and looked at me wondering why I had stopped so suddenly. I told them what I saw and to be on the lookout for fish as a school was likely nearby. I didn't know at the time what species we were encountering but I was pretty sure it was black drum, redfish, or possibly even a small school of tarpon.

After coaching them a little on what to look for Mark pointed out some movement and shadows close by so we rigged up and began casting. It was only a few seconds when Sheri hooked up with a monster of a fish. After the first five minutes of battle with lots of screaming drag, we got a glimpse of the huge redfish she was battling. The only rods I had on board this day were light tackle Waterloo Salinity with Shimano 2500 spinning reels, spooled with 8-pound diameter 30-pound braided line. I kept the drag backed off because I worried the knots and leader might be weak due to having fished on oyster shell most of the morning. It was very nerve wrecking to say the least and after lots of cheering and encouraging words Sheri landed a humongous redfish forty-five minutes later. The beast measured 46-inches and weighed approximately 45 pounds. This is the biggest redfish that has ever been brought on board one of my boats. This size of fish typically lingers towards the jetties and Gulf, not common to see them in the bay in only six feet of water. We took lots of great pictures then released that beautiful fish back to the waters she came from.

This scenario was the perfect learning experience for all of them, not just because they landed a lifetime fish but also because they now know that all the water in the bay has the potential to produce fish. You just have to be observant of all that’s going on around you. The rest of the morning they became "aware" of their surroundings and noticed more about the water than they ever have before. Even their 12-year son, Kole, is more knowledgeable for the experience. He was quick to point out mullet jumping, fish swirling and shrimp hopping the rest of the morning, which are all good signs that there may be feeding fish nearby.

With September still being one of the hottest months of the year, I am so looking forward to at least a little cool down in the weather. In the last weeks of the month we usually get our first mild cool front. When this happens we should also start seeing more schools of redfish showing up on our outside shorelines with bull reds lingering near the jetties and passes to the Gulf. If you are lucky enough to hook into a bull redfish, please remember that these fish are breeding stock and do not make good table fare. Catch, photo and release every chance you get!