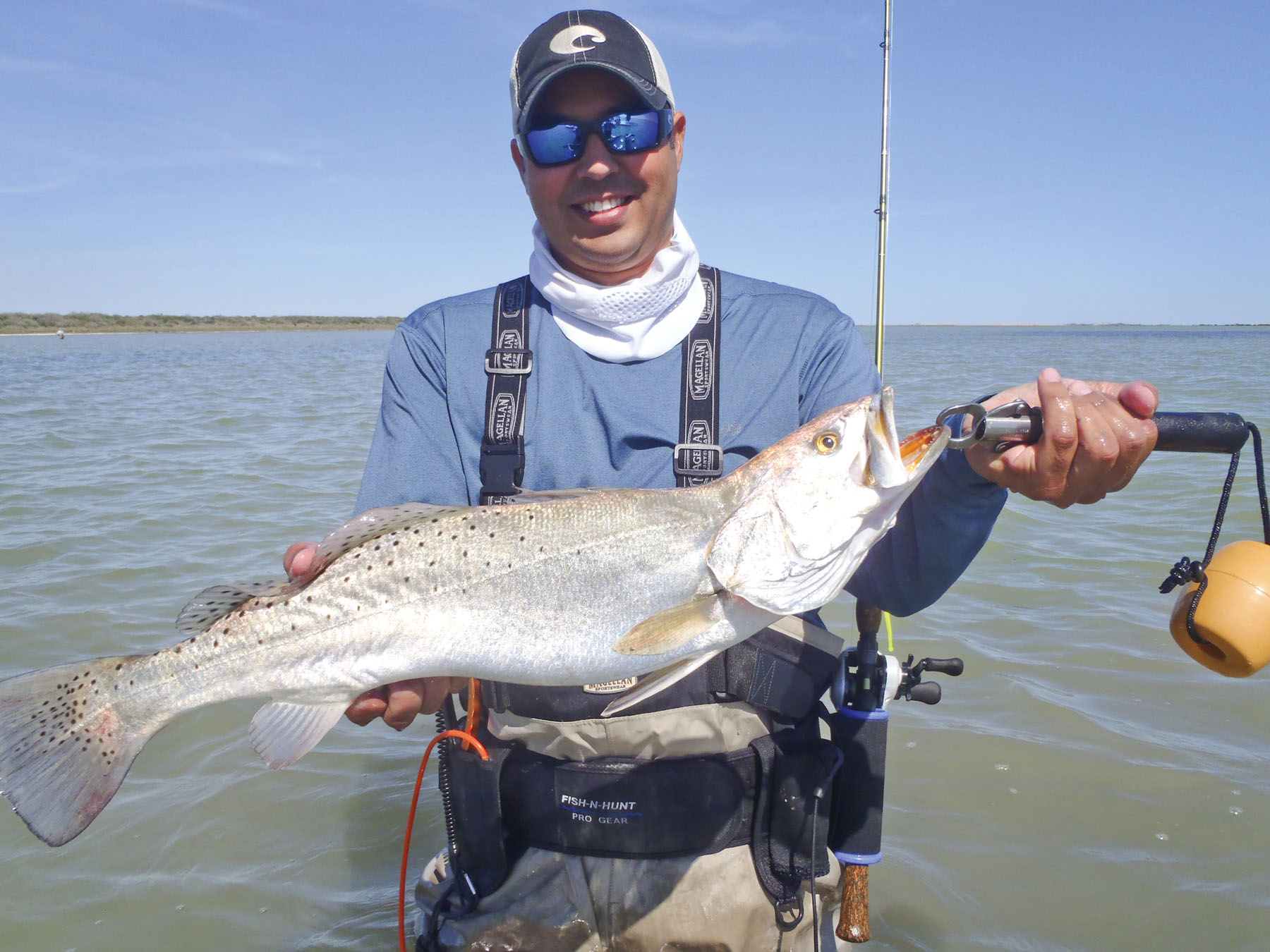 Jorge Sosa displays the size of trout we hope to find as spawning activity increases in April.
"Go fly a kite!" I know everybody has heard that one at least a thousand times.

I loved April's perfect kite-flying wind as a kid but as a fishing guide I have different thoughts. Extreme windy conditions complicate fishing plans, sometimes to the point of having to cancel trips scheduled months in advance, as has happened on several occasions recently. Even though April's wind will be predominantly southerly, anything stronger than sustained 25 mph can whip bay water into chocolate foam. We will see a notable increase in both water temperature and water level this month along with increased feeding activity, all good, but the problem will be one of finding decent clarity after mid-morning.

Redfish catches have been inconsistent over the past month, better than we saw during late-summer and throughout the fall, but still not what we hope for. Our best redfish days have been during cooler weather patterns and low tides as these fish become more predictable and can be found hanging around edges of deeper pockets. Hopefully as the tides increase we will find them in smaller groups but more generally distributed across the flats. We are beginning to see increasing numbers of shrimp in backwater areas and this usually means that good afternoon and evening tailing action won't be far behind. I never pass on small batches of gulls hovering low over shallow flats as this is a sure sign that reds are pushing shrimp to the surface.

My favorite baits for tailing reds are the Kelley Wiggler ball-tail shads and paddle-tails. Lure color isn't usually as important as getting it in front of them. Never cast into the middle of a school or small group. If you cannot see the fish, trust the birds to tell you the direction they're feeding and aim your cast slightly ahead or just to the side; landing a lure dead-center of the group usually spooks them and none will bite. When you hook up, apply enough pressure to pull the fish away from the others as quickly as possible. A hooked fish bolting through the pod or school usually means you'll catch only one whereas if you fight it away from the others you can have multiple chances. If by chance you scatter a tailing group, a switch to a smaller topwater will often draw a strike with its subtle surface commotion when soft plastics might go unnoticed. The Spook Jr will also draw plenty of strikes when singles and small groups are feeding along sand and grass transitions.

Moving on to trout, I would say the fishery from the Arroyo down to South Padre is very healthy. Limits of decent keepers have been predictable and fairly easy. Plastics have been best so far but I expect a good topwater bite soon with warmer water temperatures. In shallow, clear water I like the Super Spook Jr in the clear glass color. In semi-clear conditions I prefer a bone, redhead, or Okie shad. Rigging topwaters of all sizes with Gamakatsu 1/0 single live bait hooks is standard for me.

Our best trout action recently has been during stronger tide flows. Back in February we were finding big trout schooled in depressions on the flats but this has not been the case since the water level, temperature, and fishing pressure have increased. We are already seeing egg development in the trout and serious spawning activity should have begun by the time you read this. I've always felt that large spawning females prefer mullet and piggy perch to other forage and mullet tails protruding from their mouths is not uncommon as spawning activity increases. Keying on mullet and throwing Spook Jrs shallow and Skitter Walks in deeper water is my go-to plan for big trout in April.

In closing, I can honestly say your possibility of catching a trout of magnum proportions definitely increases during the month of April. Don't expect it to be easy though; it will take determination and patience as I mentioned in last month's article. Think protected shorelines and sheltered coves with grassy bottom. With April's wind you can bet that fishing the leeward side of shorelines might be your only option when it really gets to howling and this limits our fishing territory. Being pinned down to smaller areas of good water clarity can really test your patience.

Look at April this way; if it's too windy to get out and if a big spawning trophy could talk, she would probably say, "Go fly a kite!" Best fishing to you this spring!