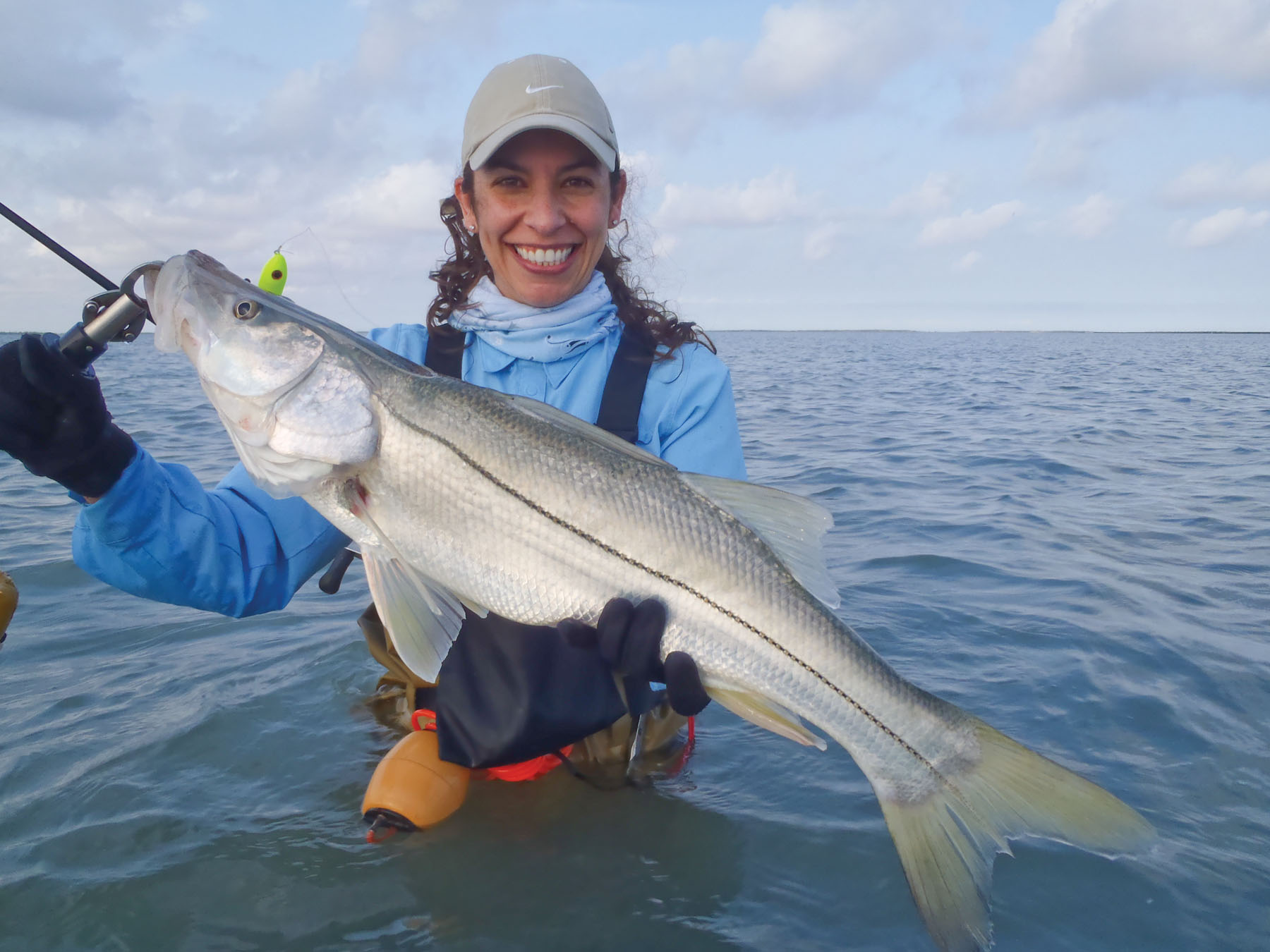 Yvette Brysch was all smiles after landing her first trophy snook - CPR - June 2011.

The summer doldrums are almost here. If you considered the beginning of summer hot, July's temperatures will really have you sweating. While the wind has calmed considerably it continues to play a big role in where we fish. Many of the Lower Laguna's prime big trout and redfish areas on the west side of the ICW have been difficult to fish with poor clarity and lots of floating and suspended grass. The good thing is we are finding fish where they should be for the time of the year, making good numbers easy when the conditions are favorable.

Our redfish population is pretty healthy right now. Multiple areas on the east and west side of our bay system from Port Isabel to Port Mansfield are holding good numbers of redfish and in some cases large schools which makes for good prospects of finding and catching them each time out on the water. If you happen to come across a school of redfish and want to catch more than one while wading or drifting, the key element is to disturb them as little as possible. These fish can be caught on topwaters, but a gold spoon or soft plastic lure will assure you of a solid hookup and quicker hook removal. A topwater in these conditions can sometimes make too much commotion on the surface that might spook or disperse the fish when you get a big blowup. When I set the hook on a fish swimming in a school, I try to horse him away from the others by using a tighter than normal drag setting on my reel. Set the hook and then quietly back away when wading, dragging the fish with you before the alarm goes off. This technique has worked very well for me over the years.

I have found that in the month of July the feeding patterns are tied strongly to the speed of the tidal currents. Meaning if all other factors remain consistent the fish you found today will feed similarly on tomorrow's tide. This applies to all species; trout, reds, snook and flounder.

The trout population on the LLM has been just amazing. When you're catching eighteen to twenty-four inch trout out on the skinny sand flats and seeing fish in this class trailing sting-rays, it tells me our trout population has rebounded very well. I like to back that up with the generous numbers of trout in the five to seven pound class that we have been landing from the traditional grass flats and sandy potholed areas.

Working topwaters over sandy potholes has been very effective in enticing the larger trout. When the fish seem less willing to explode on a surface lure, Kelley Wigglers rigged on 1/8 oz jig heads have certainly brought in their fair share of quality trout. As an added bonus we have been catching lots of small to keeper size trout under flocks of gulls and late evenings have been the best for cashing in on this opportunity. The action is easy to spot.

Currently, the only bad news, (if you want to call it that), would be the large amount of seagrass I mentioned earlier. The strong winds of May uprooted tons of it that is now floating on the surface and suspended within the water column in many places. This has really played havoc with artificial lure presentations, especially when daily afternoon breezes arranges it in rows across our bay. In some cases even our single-hooked topwaters have been no match for the amount of grass on the surface.

During July we will experience exceptionally lower tides that will mimic the water levels we see during winter. Anglers can take advantage during these low tide periods by finding and targeting the deeper areas where trout will naturally congregate to escape the heat. Anglers can also take advantage of the best sight-casting opportunity of the year during July by wading up real shallow on windless days. Early to mid-morning is usually best when wakes of cruising fish are easiest to spot before the breeze puts a ripple on the surface. If you're quiet and concentrate your efforts in some of the backwater bays, you may even see redfish with their dorsal fin exposed going about their normal business. It's always a challenge and exciting to target redfish up shallow, literally stalking the fish you want to entice and then landing it. Remember, think cool and shallow early and hot and deeper later in the day. Good luck and may your catching be red hot!