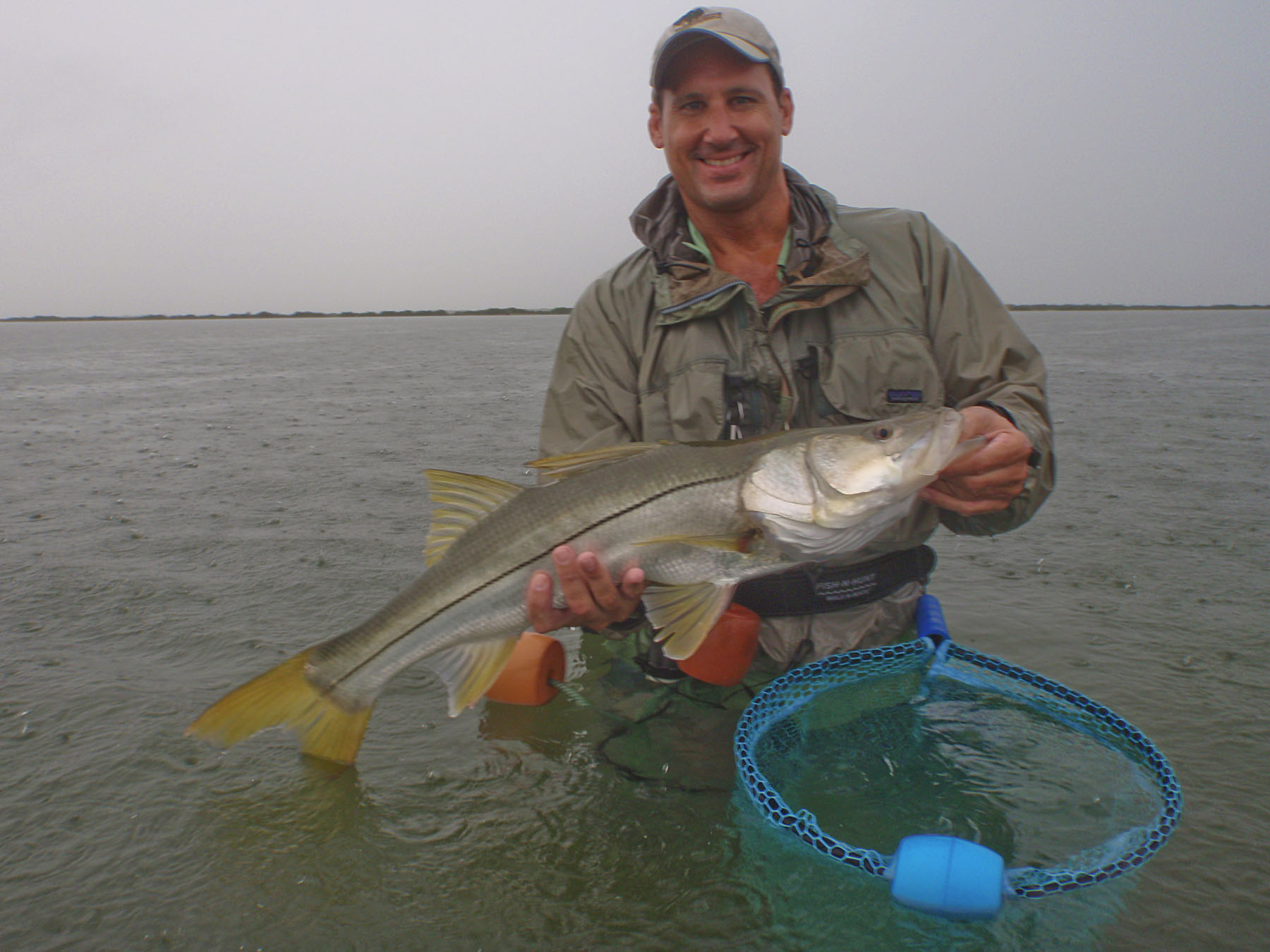 Jason's annual snook trip always ends with a trophy. This one measured 32-plus.
As we exit the month of October, our summer/fall snook season ends with a bang, and the anticipation for a great winter snook season begins. The summer of 2011 looks very promising, baring any hard freeze. This year, although we did have a dip in numbers of snook caught and released, the average size of snook caught increased. Despite recent weather that has been a bit out of the norm, there was no ill-effect on our fall snook bite. Yes, all the high water made them harder to find; however, when we found them, they were schooled up and hungry. To our excitement, our very last fall snook trip produced twelve linesiders, all released to fight another day.

All the wet weather and record rainfall we have been experiencing since June has continued to replenish our bay system with the freshwater it needs to sustain itself. Despite the dip in salinity, fish are still adapting well to their new environment and have found our artificial baits very alluring. Water temperatures have cooled off a bit making the fish more active as they gear up for the cooler weather that lies ahead, but the greatest positive effect I have observed with the influx of all this rainfall is that all this freshwater has added the right nutrients and right combination for our bait to continue to thrive.

Because of the continued abundance of shrimp in the Lower Laguna Madre, we have been seeing flocks of sea gulls working more consistently than most anglers can recall. Bird action always seems to intensify during periods of brisk north winds. The arrival of a cold front tends to activate a feed. Redfish and trout certainly take advantage of these periods to gorge on shrimp that are exiting our shallow bays.

Once again, bigger birds such as pelicans, will play a significant role in helping us find fish. When our water temperatures begin to fall, bait will become more limited and not as easy to find in concentrations, that's when these birds become a key part of our fishing plans. Their nose dives into the water will show us where the bait, and consequently the fish, are lurking.

This is the month where we will begin to see an obvious weight gain and added shoulders to the redfish species. Trout too will show noticeable signs of gluttony around their girth and shoulder areas. As the fish sense a drop in temperature and shorter days, every day will be a feast as the fish know that their feeding patterns will be determined by old man winter's desires for the next few months.

It has been a while since I have fished the mid-portion of the Lower Laguna around the Arroyo Colorado and on north to Port Mansfield. This time of the year, I like to spend my efforts slightly south of the Arroyo. Areas with muddy shell bottoms have worked well in the past because redfish always seem to like warmer muddy bottoms as water temperatures dip. When they spook over shallow muddy bottoms, they tend to leave a mud puff that is easily visible. This is a sure winter sign showing the presence of fish in a given area. If I happen to run into an area displaying mud puffs, I'll stop if I can see that it's a concentration of fish and not just a cloudy area where the fish once was.

Topwater baits should be on stand-by and ready for use when the conditions arise. The variety of our plastic baits will take a change as the water cools down. The old reliable tails will still work effectively, but we will add 6" Gambler Flapp'n Shads along with MirrOlure's Paul Brown Fat Boy and Devil to the lure box. This is also the month that a good pair of reliable and durable waders will be needed. Actually, starting about the first of November and continuing into April, waders will be needed if your trophy excursions will be by foot. I highly recommend that you take a look at the selection of Simms waders. View their website (www.simmsfishing.com) and take a look at what they have to offer. You might also take a look at the Fishing Tackle Unlimited online store, (www.fishingtackleunlimited.com) for all your winter fishing needs. Better yet, come by Fishing Tackle Unlimited on Saturday, December 11, for the 2010 Inshore Fishing Expo. I will be conducting a seminar on the elusive Texas snook. Be sure to come by and say hello. Until then, may you and your family have a happy Thanksgiving.