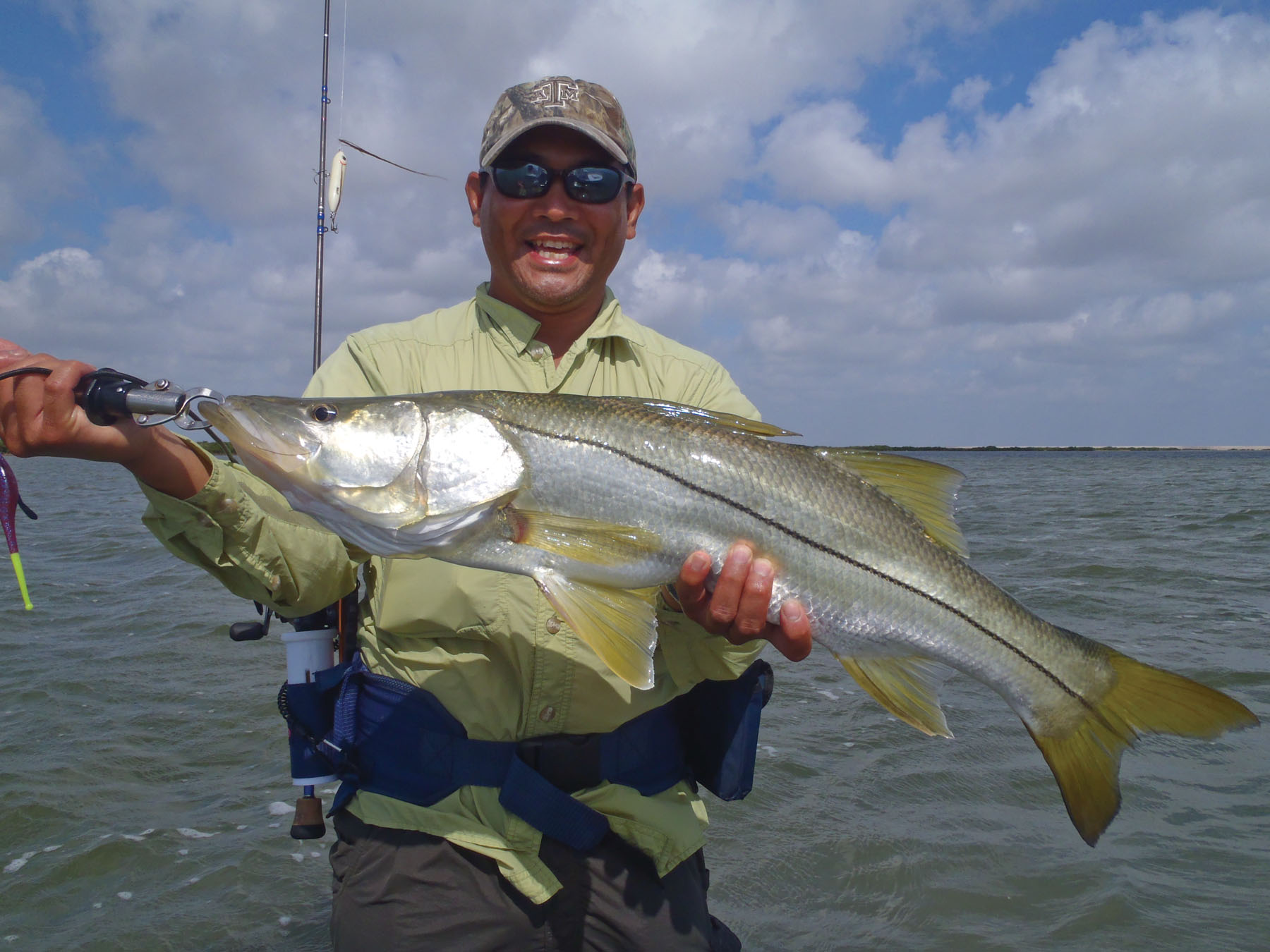 Eric Onishi was able to scratch this species off his bucket list with 32 1/2 inch trophy.

October is known to bring lots of changes to the fishing patterns here in the Lower Laguna Madre. Having said that, much of the change we are accustomed to seeing in October actually begins in the rainy month of September. As of the 7th of September we have yet to receive the first drop of rain and there is none in the extended forecast. How this will affect our fall fishing is anybody's guess.

One thing is certain: rain or no rain, that scorching summer sun and unbearable heat will be all but gone when October rolls around. I am looking forward to cooler mornings with beautiful sunrises and pleasant temperatures through the evening hours. During the hot weather we had some unusual experiences with sharks as we waded in deeper water. Looking over our shoulders for the next shark to pop up while trying to avoid stringrays added excitement to our trips; two more things I will not miss.

Our fishing as of lately has been a hit or a miss, especially if your trip included a tight timeline. I mainly attribute the miss to our early morning slack tides. There have been many days when we started with little or no tidal movement the incoming tides occurring in the wee hours, way before sunrise. To overcome this we have been running further away from the Brazos Santiago Pass for a better chance of catching a moving tide during the day. I have come to estimate from my personal observations that the difference from predicted tides of Port Isabel to the predicted tides of the Arroyo Colorado is between four to six hours depending on your location and how strong the tide is moving on that particular day. The mornings when we have experienced favorable pre -sunrise tide movement, our choice has been to make runs further away from the Pass to catch a moving tide further up the bay while we still can. Another strategy that has been working for us on tough days is waiting on the tide to fall out later in the day. Countless times we have fished where we know fish are present but perhaps not willing to bite in the early morning hours. In those cases we go looking for more productive areas only to return later to the same general area but perhaps slightly deeper as the tide begins to move out and bring the fish to us. Moves like these have changed many of our trips from slow to productive days on the water.

We continue to throw small topwaters rigged with Gamakatsu single live-bait hooks, but presently the most productive baits have been ball tail shad Kelley Wigglers in dark colors. Because of warmer temperatures the fish have not been staging up shallow very long. As a matter of fact, our most productive depth has been right around waist deep throwing tails on 1/8 oz Kelley Wiggler jig heads bumped slowly on the bottom. Time-wise our most productive hours of catching have been right around noon and into the evening hours when the outgoing tide has been at its maximum speed. Greater numbers of redfish continue to be caught near the Arroyo Colorado when compared to areas down south to Port Isabel. Trout are being caught in good numbers from Port Isabel to Port Mansfield, and if these past few incredible months are any indication of the size and number of trout we will see this winter, the outcome promises to be a blast. As the air and water temperatures drop, look for fish to remain in the shallows a lot longer than they have been so don't give up to early on the shallows.

In closing I would like to say that we had a very good spring/summer snook run. My logbook says we caught more this summer than in 2010 which proves that February's freeze had no ill-effect on the fishery. I had many clients make lifetime best catches but none made me personally happier than serviceman Eric Onishi who was on a bucket list trip, just home from Afghanistan. Eric plugged away with great determination and when his bucket list fish finally crashed his lure it put on quite a show, jumping and thrashing, trying every trick to shake loose.

I'm very grateful to be a part of something that started when he was stationed overseas, flipping the pages of Texas Saltwater Fishing Magazine, dreaming of one day catching a linesider. Congratulations Eric, and many thanks to you and all the brave servicemen that sacrifice to help protect our country.