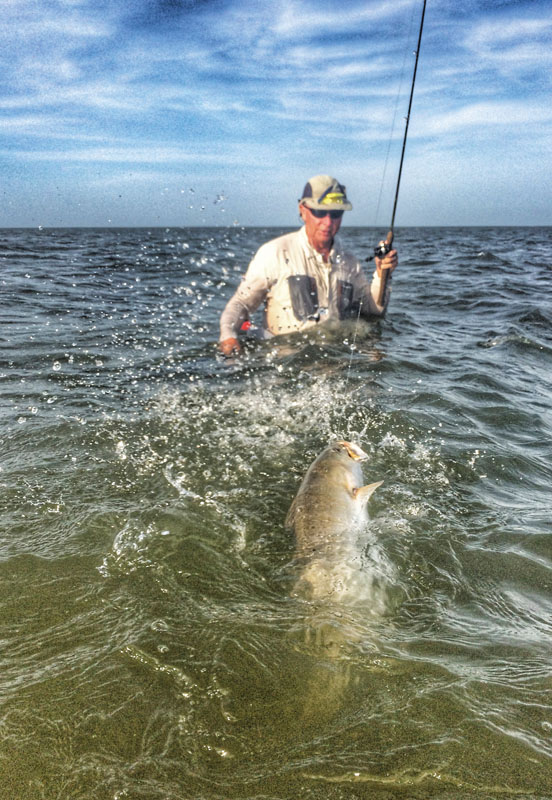 Timing has been everything lately. Traditionally, though, April is always like this. You can go where there are fish and you'll have to sit and wait for them to go off. When the fish do go off, it can be very memorable, but it's often frustrating grinding on them until it happens.

Fish seem very temperamental this time of year. They need something to flip the feeding switch and good luck predicting what it'll be. I've had days when we started at sunrise during a minor with full outgoing tide, continued on through the major at midday with the tide incoming, to no avail. But as soon as the sun starts going down–hold on! That's April to a tee. Sometimes it's best to just go for the long haul, fish hard all day and hope for the best.

May brings more consistency to the bite, in general. They'll start to get into more of an early summer routine now that the spring transition is mostly behind us. Everything seems to be happening a little ahead of schedule this year so I think that our May fishing has potential to be really great!

Fishing deeper water will become a thing to do in the coming month. A lot of the fish are already trying to pull away from the flats but each little cold snap brings them right back. As soon as we are without fronts for a couple weeks and the water temperature settles into the 70- to 75 range, the fish will become way more active and move to deeper, cooler water. Don't forget about wading the sand flats during this time, though. You can experience some phenomenal bites throwing big topwaters right at sunrise. Warmer water temperature has a reputation for firing the better fish into feeding frenzies. Keying on slicks along the transition zone, where flats taper to deeper water, is known to produce outstanding results during May.

East Bay looks promising. Fresh water isn't totally gone, but it's nothing that we're not used to dealing with the last two years. Wading has been the ticket lately but with the push of fish headed out deep, drift fishing is becoming more successful, too. Like I talked about above, timing is everything so try not to get too frustrated if they don't light-off as soon as you pull up to your spot, it's often a waiting game.

While wade fishing during the coming month, focus on sand bottom with scattered shell. Topwater lures have been best but whenever the bait hasn't been as active, soft plastic lures such as a MirrOlure Provoker rigged on a 1/16 ounce jighead have been the way to go. If you can catch the water really clean, the old school MirrOlure 51 MRs are hard to beat this time of year as well.

May in East Bay is known for the reef fishing. Reefs can offer some easy drift-fishing but can become totally overrun by flat billers at times. Remember to be courteous while fishing the reefs and try to keep a respectful distance from other fisherman. Use your trolling motor once in the area of the reefs and try to refrain from cranking up your big motor and blowing through the areas where everyone else is going to drift.

West Bay has been growing inconsistent but still giving up good catches from time to time. The fish are stacking up on sandier shorelines over grass and shell. We're still seeing a lot of shad and the fish are feeding on them reliably. Wade fishing has been best over sand and shell bottoms with topwaters. Once the topwater bite begins to fade, plum-chartreuse MirrOlure Provokers on 1/16 ounce heads have been dynamite. Redfish have been plentiful in the marsh on Bagley spoons and paddletails. Flounder have been spotty but they are showing more consistently on shallow sand flats around bayou drains the last week or so.

Trinity is still a mess. My home water seems like a thing of the past but one day she'll be back. The Trinity River is down to 14,000 cubic feet per second versus the 55,600 cubic feet per second flow it averaged for months. With the right tides we could see a push of trout coming back into the lower parts of the bay, maybe late-May or early-June. But the April showers aren't over yet and we could get slammed again. Keep your fingers crossed!