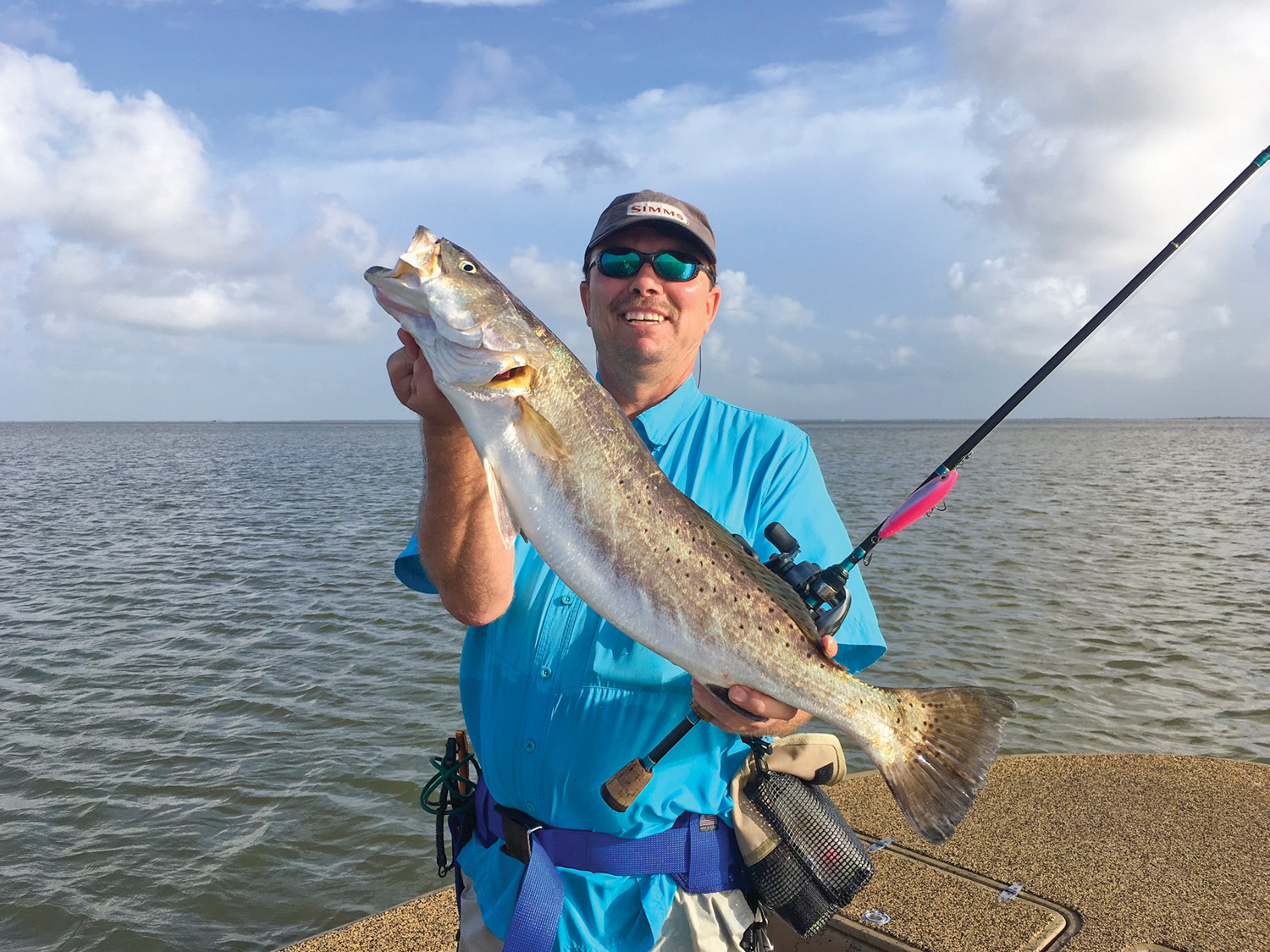 TPW Coastal Fisheries Division’s spring gill net surveys are saying what we already know - our bays are in great shape and full of speckled trout. It's been a great 2017 and there's no reason why the momentum should decline in August.

West Matagorda Bay continues to impress with considerably larger than normal trout. Once known for mostly schoolie-size fish, West Bay has consistently coughed up fish longer than 20-inches all year. Shoal grass shorelines are providing great topwater action on the incoming tide. Super Spook Jrs, Skitter Walks and She Pups have been getting gobbled up at sunrise.

Around Palacios, boaters anchoring on the barge and sunken shrimp boat have scored easy limits with live shrimp rigged about four feet under a cork. Reefs off Palacios Point and Hotel Point are holding good trout as well. Half Moon Reef has held fish all summer long but it all depends on the wind. South winds have been a booger for most of the summer so it has limited access to this open-water reef.

East Matagorda Bay has been good while drifting. It's a much tougher bite with soft plastics but those tossing live shrimp under a Mid-Coast Popping Cork are catching plenty of fish. Waders have worked on the mud flats on the east end and found fish on Super Spooks and She Dogs. Reefs in the middle of the bay; Long Reef, Three Beacon, Half Moon and Barefoot have produced for waders on live bait and Bass Assassins, Down South Lures and Norton Bull Minnows.

Waders around Pass Cavallo have caught early limits on Super Spook Jrs and Down South Lures while wading sand and grass. When the tides are at their weakest, I like to camp around the jetty and pass because the strongest tidal flow, even though its weaker than normal, will occur there.

For redfish, points and bayous dumping out around Oyster Lake, Crab Lake and Mad Island Reef have held good numbers of slot fish. Boggy Lake, just off the ICW near East Matagorda Bay, has been good, as has nearby Lake Austin and the muddy shorelines of Brown Cedar Flats.

On the offshore scene, August normally allows for more calm days than any other month. Guide Michael Kubecka said kingfish are everywhere around structure or just trolling. Since the Gulf shrimp season opened back up many kings have been behind shrimp boats while they are culling their catch.

Red snapper are everywhere from Freeport to Port O'Connor. Drop a squid down in 40 feet of water or more and you are probably going to get bit. Cobia have been scattered lately, said Kubecka, but best bites have come around wrecks and weed lines. Lots of dorado and chicken dolphin on the weed lines.

Marlin have been on the deeper rips while trolling Islanders, ballyhoo and Black Bart's. Yellowfin tuna are showing as well around floaters and while drifting and casting tuna poppers.

Of course, we will be itching to get in the surf. Be careful when you open the lid on your tackle box. All your topwaters could jump right out of the box just dying to get crunched by an “ocean” seatrout.