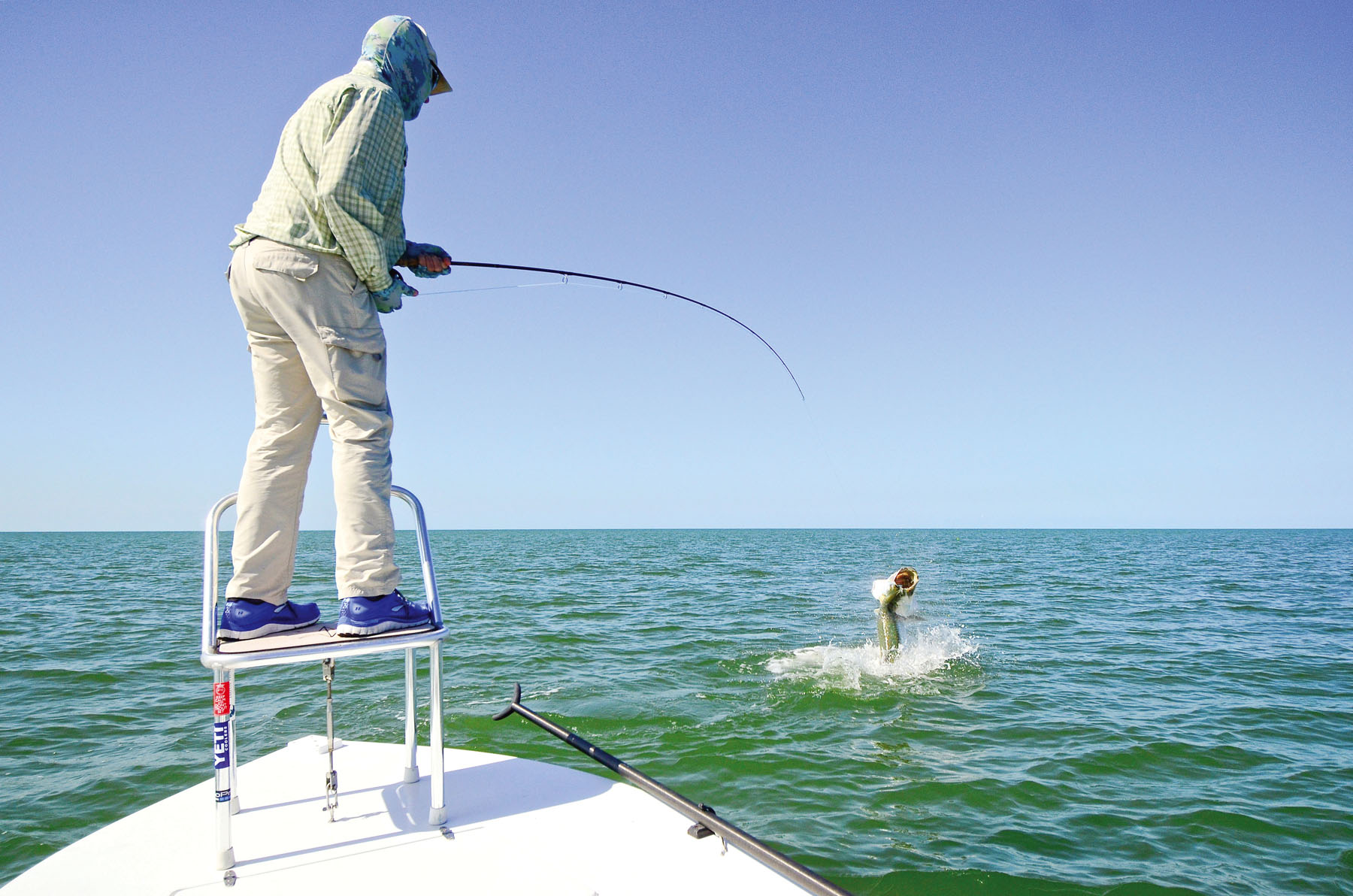 From which fork in the road to take all the way down to whether to eat out or stay home, choices are plentiful in our daily lives. As for how we choose, some decisions are based on right and wrong and others boil down to that age-old argument, does it taste great or is it less filling. Meaning, whatever works for you. So now, let us take the latter philosophy and talk about the bow of a poling skiff.

As far as I am concerned, there is no finer place to be standing than the bow of a skiff. It is a spot from which many dreams have come true for me and many others. However, sometimes, just standing on the deck of a skiff is not enough and it is advantageous for the angler to be in a further elevated position. But, fishing from a platform has its pros and cons.

For the most part, the main argument for having an angler fish from a bow platform is to aid them in seeing fish. By being elevated, the vantage changes and allows an angler to see more, looking down into the water. The reason for this is glare reduction. Even with a modest increase in elevation you are no longer looking at the faces of wavelets and ripples but more in-between them and into the trough. This means, the higher you get, the further away you can see.

It is clear that elevation gives the angler an advantage however, it also can become a hindrance to the guide or buddy who is doing the poling. Remember, fishing from a skiff is a team effort. When the angler on the bow gets too high, he blocks the view of the person poling the skiff and looking for fish. As a rule though, if the angler is good at seeing his/her own fish, it is no big deal because they can cover that small zone in which the pole jockey cannot see. However, for me as a guide, this is where I get aggravated. Most (not all) of my anglers lack the ability to spot fish on their own so it is important that I have a clear vantage point for seeing the area that they are blocking at 12 o'clock. This to me is one of two major disadvantages to utilizing a platform.

The second disadvantage comes in that most platforms are secured to the deck, either with a turnbuckle (can be removed) or permanently bolted in place. This does not allow for easy changes to the COG (center of gravity) by having the angler move forward or backward to trim the boat. This can be very important when fishing in extremely shallow water where you have to squeeze every quarter inch out of your hull to get to where the fish are or when you are in rougher water and you need the bow just a little higher to keep it from "dipping" into the waves.

A simple solution to this trim issue is to utilize an ice-chest that can be moved around to stand on. Now back when I started guiding this really wasn't a reality because most ice-chests would crush beneath the weight of a great many of us. However, things have changed over the years with the introduction of heavy-duty ice chests like the Yeti. These things make perfect casting platforms for the more agile angler, especially when you mount a Sea Deck pad on top. But again, each solution has a Catch 22. By going the ice chest route that can be easily repositioned for optimal trim, you lose the option of having a leaning rail or bar.

Leaning rails can sometimes be the difference in being able to be on the bow and fishing where the fish are versus just going and finding calmer water that may or may not have fish. Rails also allow less mobile anglers to stand on a platform, where without one they may be relegated to fishing from the cockpit.

Now for the two biggest advantages to having a bow platform on a fly-fishing boat: the platform prevents the angler moving around, stomping their feet and shifting their weight when trying to sneak within casting distance. The second, perhaps even more important and why I will always have a bow platform; if limiting movement and noise is not enough, the platform also greatly reduces the probability of the angler stepping on loose line.

I have seen more perfect opportunities blown by anglers standing on their fly-line than any other. No matter the skill level, the black magic of the fly-line's ability to find its way under and around an angler's feet is a fly-fisherman's worst nightmare.

Until next month be good and stuff like that.