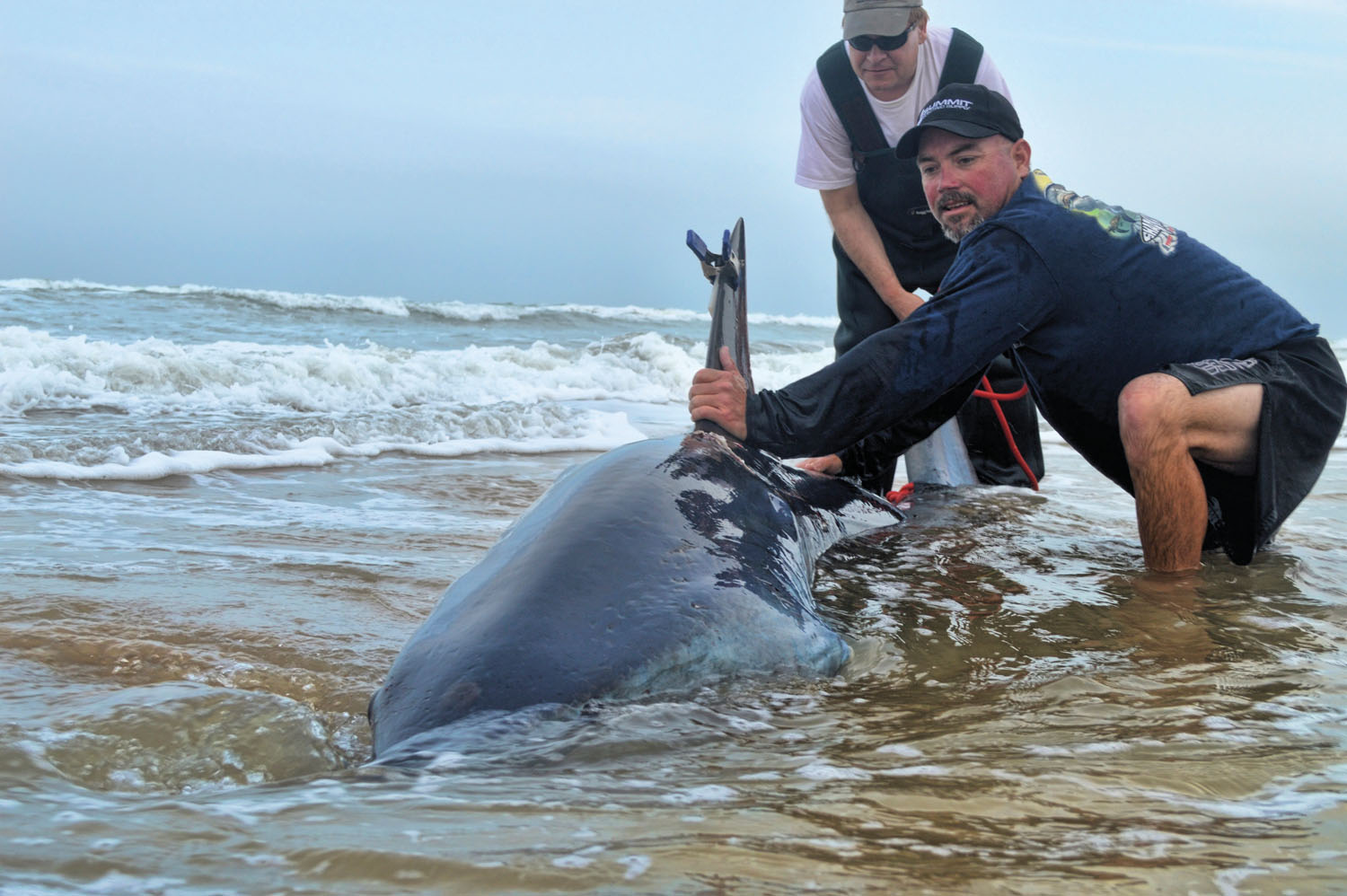 Dwade steadies the mako’s dorsal as the satellite tag is applied.

A Remarkable Story for both Man and Beast

The sea is a truly magical place and the pursuit of its unknowns is the very essence of fishing. Recreational anglers seek to unravel the sea's mysteries with rod and reel and whether we ever realize or understand, we are driven by dreams of landing great fish. While it is not practical to expect a "divine" trophy every trip, the possibility that such might occur looms every time we go.

I have been blessed with a collection of "lifetime" fish yet my personal "aquarium" is far from maximum capacity. I am beyond obsessed and every remarkable catch drives me harder in my pursuit of the next. As a fishing guide and with many fishing friends, I achieve as much satisfaction watching others fulfill their own dreams. The adrenaline rush and sense of accomplishment after releasing a monster, theirs or mine, is always the same.

The story I am about to relate borders on surreal. I doubt even Hollywood could script something this outrageous. Yet, it happened, and on a beautiful Easter weekend to boot!

To set the stage–this year's spring transition in the South Texas surf was unusual in many ways. Blacktips showed up in force in mid-February. The first week of March produced the first surf-caught Texas mako in more than a decade; I wrote about it last month. A week later large bull sharks were destroying baits instantly upon deployment. A succession of moderate cold fronts kept beach water temperatures in the upper-60s and during this time blue-water pushed in to just beyond the beach. Big sharks were showing in uncommon abundance, shadowing and feeding on schools of jack crevalle.

Making camp and readying tackle we could not help but notice the lack of shark activity. Spanish mackerel and jackfish were everywhere along the beach, but where were the sharks?

Fishing a couple hundred yards to our north was good friend and fishing buddy, Dwade Hickey. Dwade and I began our sharking careers together although his hardcore time on the beach is now greatly limited with family responsibilities. Another fishing buddy and partner in crime, Scott Nelson, was set up a similar distance to the south.

Shark activity began to pick up as afternoon came around. We had a few runs here and there without hooking up when Dwade finally broke the ice with a blacktip. "The bite" this story is about came at 3:00 pm.

Dwade's oldest son, Dustin, was kayaking a shark bait when one of his big outfits went off. Dwade had no clue what he had hooked, but the fish was big and powerful, that much was evident. I hurried to see what the fuss was about and found him engaged in the initial run of a slow but steadily moving fish. Our first thought was a big tiger. I left Dwade to the fight and ran down the beach to get Scott to assist us, gathering camera and satellite tagging gear on the way. Tagging another mako was our goal but putting a satellite tag on a big tiger was highly acceptable in our opinion.

Despite having not put a large shark on the beach in a quite a while, you would never know by the textbook job Dwade was doing. He turned the fish just as we arrived and was gaining ground. With the fish approaching the second bar we could occasionally see the dorsal and then the tail, the dark silhouette seemed to confirm a tiger.

Scott and I waded out as Dwade coaxed it toward the first bar. Even though far from our first big shark at the leader we are always very cautious–adrenaline in both man and fish can cause unexpected things to happen. I got the tail rope on it without incident and–Holy Cow–what we thought was a large tiger turned out to be a giant mako!

The game suddenly changed. Makos can be acrobatically dangerous in shallow water, even after a good fight, and this one was massive. I managed to get the tail roped and Scott and I put everything we had into dragging it backward toward the beach. The powerful tail thrusts had us hanging on for dear life. Finally beached, we were in total awe.

Dwade was in awe as well. Not only his first mako, but only the fifth ever to hit the sand on a Texas beach. And easily the largest. The old brute female, with fresh mating scars, taped out at 10'6" despite a nubbed tail. A near-state record fish, though we were all in agreement she would be released.

We worked quickly, cutting the single leader drop and leaving the hook. After measurements and photos we got busy installing the satellite tag. Time out of water is critical to a successful release and Dwade and I soon had her swimming strongly out to sea, sporting new jewelry.

An incredible round of cheers and high-fives roared through camp as we reveled in the incredible achievement. This is what big-game fishing is all about. Little did we know that there was a lot more to come.

Roughly two and a half hours after we released Dwade's mako, lightning would strike in my camp when I hooked another large shark. The initial run went as expected, straight offshore, slow and steady. This one I just knew was a tiger. Scott came over cheerfully pumped up. Dwade soon joined us. I fought the fish nearly 30 minutes while it swam through my spread tangling other lines. Bringing it to the first bar Dwade and Scott went out to apply the rope. In the rack lights, even from atop the platform I noticed something strange.

Dwade was shouting mako. Not just any mako, it was HIS mako. Incredibly, the same fish had returned and taken another bait! Scott and I freaked instantly, fearing she might not survive a second fight.

I jumped off the truck and rushed to cut the leader drop. So wanting the fish to live I never even posed for a photo. The shark was visibly more stressed than after the first landing and every second was precious. Dragging a 600- to 700 pound mako out through crashing waves in near complete darkness is the creepiest feeling in the world, but we had to do it.

Fortunately, she had enough strength remaining and swam off, for the second time, with satellite tag blinking as it pinged location messages. Overjoyed that she survived the second release, we were still quite concerned with having left two hooks with leader drops in her. We feared we would find her washed up dead the next morning.

The satellite tag can only send a signal when the dorsal breaks the surface. And starting that evening and nearly every day since, she has been sending signals. What seemed a potentially catastrophic situation turned into a miracle on Easter. She is alive and providing scientists at Harte Research Institute with very valuable data. Anybody interested can track this epic mako on the OCEARCH shark tracker (ocearch.org).

Her name is Lazarus. How fitting.