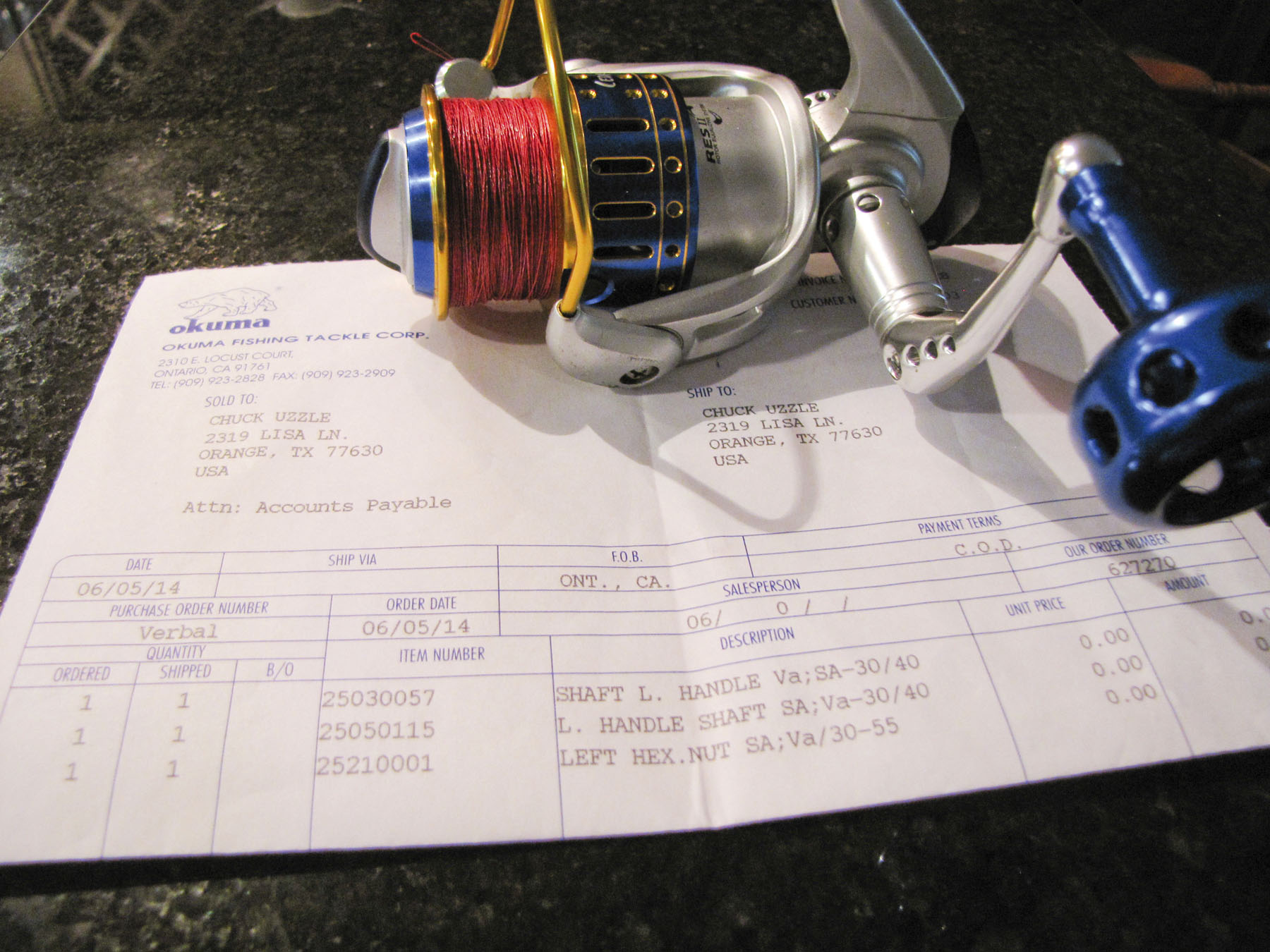 Nothing beats great customer service!
It all starts long before you even get close to the water. If you're like me you start reading signs along your route to the boat launch. I have a handful of indicators that are as much a part of preparing for my trip as anything else I do. The big United States flag at one of our local car dealerships is one I check every morning for a reading on the wind. I know what you're thinking, this is the 21st century; all the info I could ever want or need is at my disposal on my smart phone. To that I say, technology is good but seeing is believing.

Another indicator for me is the steam rising from the stacks of the local refineries. Rising straight up tells me we'll have calm seas, drifting at a slight angle usually foretells slight to moderate chop, a plume running 90 degrees from the stack means angry swells and whitecaps. The sight of the flag waving or the steam rising sets the tone for the day and helps me finalize my plan as to where I may fish or what part of the lake or bay I need to avoid. These are real-time indicators that need no internet connection or concerns of losing cellular service.

Arriving at my favorite boat launch, a glance at the water level in relation to the ramp and channel markers is another immediate tidbit of information that I reference before putting the boat in the water. As far away as I usually launch from the main body of Sabine Lake, after all these years, I am reminded of the mystery of tide predictions. Several hours of correction factor are needed to even begin to make a halfway accurate guess, and of course the prevailing weather can blow all these out the window. Again seeing is believing.

Now, with all the shade tree meteorology and tide measurements, I feel like I have a good idea of what I want to do for the day so I head out to make it happen. The sound of the outboard motor coming quickly to life is the final step in the process, after that it's time to just fish.

My rendition of how my mornings begin may seem a bit remedial and that's understandable. The act of loading up, heading to the water, launching the boat, and going fishing seems very natural after many years. But it is the common everyday stuff that ends up being our greatest downfall, if we will let it. Think about it; when was the last time you greased the wheel bearings on your boat trailer or gave your reels a thorough cleaning? When did you last change hooks and split rings on your hard baits? Or for that matter; when was the last time you changed the line in your reels? We take too much for granted and then complain when things do not work the way we think they should.

How many times have you seen this guy at the launch, you know the one I'm talking about cowling off the outboard and tools all over the deck while he tries desperately to get that motor cranked. After a prayer session, or maybe a cuss fest, the motor comes to life and he zooms away from the dock as if everything is suddenly just fine. Chances are that same guy is the one waving you down for a tow a few hours later. "I don't know what happened, it just won't run," he says. All the while he knows good and well he never should have attempted the trip in the first place.

I actually had one of these guys flag me down one weekday last November, out in the middle of Sabine Lake. I did the right thing and began towing him to the dock. On the way in we ran into a flock of gulls working feverishly and all of a sudden he was screaming for me to stop. I obliged and asked him if everything was okay. "Aren't you going to stop and fish this set of birds?" he asked.

I was stunned. When I reminded him that I was doing him a service towing him to the dock he shouted back, "Hey, just leave me here. I can make it the rest of the way on the trolling motor." Again I obliged his wishes, cut him loose, and went my way shaking my head. But I had to wonder how in the world some people can look at things so differently.

It was completely obvious that my newfound friend had a very limited understanding of the word service. And by the looks of his outfit it was equally obvious that he did not understand how that term can be applied to boats and fishing equipment.

The word service is used many ways and all too often in the consumer context it is mentioned only in the negative, meaning lack of. But I want you to try something. The next time you are in a restaurant and the waiter or waitress is providing great service at your table, ask if you might be able to have a word with their manager. Calling a manager to the table usually means you or somebody in your group is unhappy but just watch as relief washes over their face when you tell them the purpose in calling them over was to report GREAT service.

Paying a compliment to those who give quality service is needed just as much as calling attention to those who fail. In the fishing world there are lots of folks trying to make a living serving anglers, and the ones who do it best are usually are the ones who last the longest. Customer service is one of the highest rating factors that boat buyers and owners cite as reasons for having chosen a particular brand and dealer. Same goes with fishing gear; a company with good customer service will gain a great following and inspire tremendous loyalty.

It's always nice to pay compliments to those who do a good job and I recently had a couple of exceptional experiences. I picked up a new Okuma Cedros spinning reel recently and a part was missing that allows the handle to be switched from left to right hand operation. I didn't know at first the part was missing, until I contacted Okuma to ask a few questions. A very helpful representative named Ron realized my problem, answered all my questions, and within just two days the missing part was in my mailbox. Talk about a great way to make your customers happy and keep them coming back; Okuma knows service!

Another great company to work with is FiberTex & Supply, the makers of Stiffy Push Poles. Kevin Shaw and his team have a long track record of going the extra mile for Texas fishermen. Over the past fifteen years I have used Stiffy Push Poles with only two issues, and they were both my fault. In one of them, another boat drifted into mine at the dock and my 21' graphite pole got crushed. I depend on that push pole and it happened that I had trips booked in the coming days, no time for the long drive to Corpus Christi for a new one. An after-hours cell phone call to Kevin placed a repair kit in my hands the next afternoon. So when I decided it was time for a new push pole recently, you can bet I called Kevin.

I guess the older I get the more my views and priorities change, just like the ones I mentioned above. Hopefully you might look at some of those in a different light and understand that we all want to be successful with our time on the water but we certainly can't take anything for granted. Be safe and enjoy some great summer fishing.