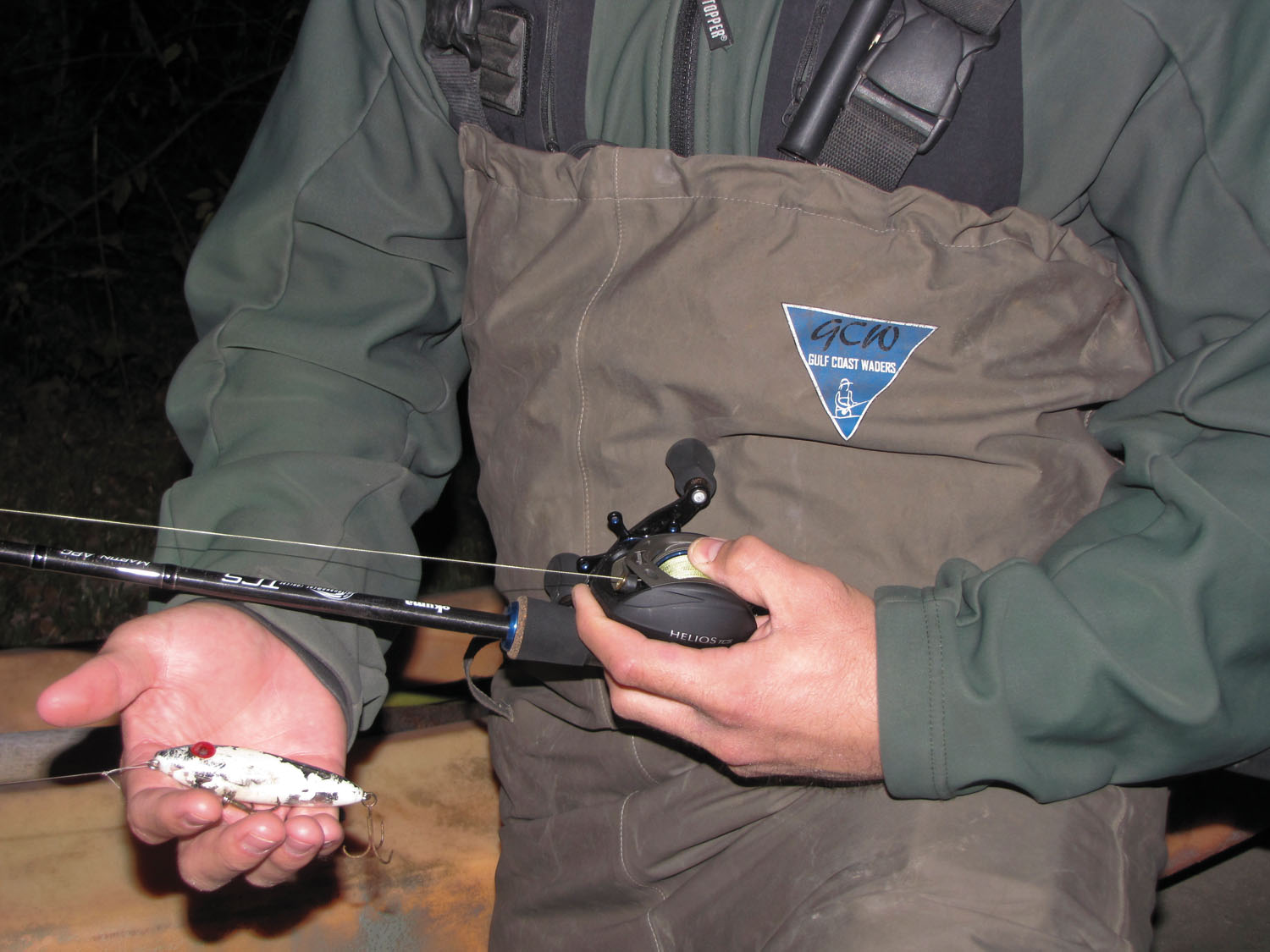 This pair of Gulf Coast Waders has given me great service well into their second season – sans the nail sticking out of the duck blind incident. But that’s not their fault.

For years I have tried to stay away from obvious story lines, the ones it seems magazine writers invariably cover at certain times of the year. The typical year in review or New Year's resolutions stuff have become almost too cliche for interesting reading. So- instead of the old tried and true reruns, new topics have always been my goal in order to bring our readers a new and different flavor. It would be easy to string together a handful of paragraphs cursing and moaning the crazy weather of 2015 and what it did to our fishing on Sabine. It would be even easier yet to tell you how the patterns and success rates for local fishermen were more up and down than most people's stock portfolios. To put it all in a nutshell, 2015 was as much about extremes as I can ever remember. With all that being said, I will be the first to welcome a new fishing season and will be very happy to start a new chapter that hopefully has a better story line than the one we just finished.

I hope for all the readers out there, each of you received some warm winter gear at Christmas, for those late-winter and early-spring fishing trips. Especially if like me, you will be doing plenty of wading. The forecast for our early months of 2016 looks like it could be a really cold one and that will certainly impact every fisherman who has hopes of tangling with a career fish on a perfect winter wade. As I have grown older I have become much more of a stickler for comfort than I was ten years ago. The old "go hard or go home" attitude has now been replaced by the "be smart when you go" mantra. Taking greater precautions to be dry and warm have made my nasty days on the water much more tolerable than in years past.

I have become a stickler for waders that don't leak. I know there are wade anglers who reach in the bag and grab a pair of waders knowing they'll leak "a little but not too much" and willingly head out to battle the elements. Quit putting yourself through the misery is all I can say about that. Get a quality pair of waders and have a backup pair just in case. I have been wearing breathables from Gulf Coast Waders for six years now and I love everything about them. Jason and the folks at GCW provide a great product that lasts and won't break your budget. I have a set I'm currently using for fishing and hunting that are in their second season and have been through the wringer. I punctured a hole in them last year, on a stray nail in an old duck blind, and repaired them with the kit provided–and never missed a beat. I keep a couple of extra waders on my boat for folks who may need them. I'm a believer.

Under my waders in cold weather you can bank on me wearing the Under Armour brand of cold gear and fleece pants along with good socks. The socks may be the most important pieces of all when you get right down to it because as long as your feet are warm it's all good. Let your feet get cold and you are as good as done. The thought of spending a full day in water as cold as 40-50 is not too appealing from the get-go, but doing it with the right gear makes it much more tolerable. If you are comfortable, you are far more likely to fish longer and harder, which in turn tips the odds further in your favor.

For what it's worth, the winter months and early-spring see a ton of fishermen get on the road and travel to distant fishing places. One would think that the less than desirable weather would keep folks close to home but that's not always the case. The opportunity to take a shot at a trout as long your leg is often enough to prompt many anglers to head to the hottest destinations. Baffin Bay, Laguna Madre, East Matagorda, Sabine Lake and Lake Calcasieu will conjure up all kinds of visions of giant trout crushing plugs for those willing to brave the elements. The prime time for chasing big fish is upon us and it's just a matter of when, not if, the first double-digit trout of the year shows up and sends the fishing world into a frenzy. It won't be long after that when the crowds will show up hoping to duplicate the feat.

The ensuing crush of fishermen on a particular body of water is exactly what keeps local anglers awake at night–nightmares of nonstop boat traffic send chills up their spine. It's inevitable, though. As soon as news breaks, the rest of the world will be on their way. Just like in the movie Field of Dreams where they say- if you build it they will come; here on the coast it's more like- if you catch it and put it on social media–everybody will come.

Not only is this the time of year when fishermen chase trophies, it's also the time when good fishermen get tight-lipped. Very few of the big-trout gurus will ever willingly provide a public glimpse of their catch; it's usually someone who they thought had been sworn to secrecy. For some reason there are folks who feel the need to share everything with the world and then complain when the world shows up. Most of the time, by the time the story gets told all around, it's too late to capitalize on the opportunity. A great way to look at this is- if you're the guy that caught the fish, you are probably too late.

Right now is such an opportune time to be on the water, fewer fair weather anglers are out and the chance for a big fish is as good or better than any time of the year. Many folks will forego the speckled trout bite and set up shop on a solid redfish pattern that emerges early each year. Marsh drains and main channel points near deep water will often be areas where redfish will stack up in great numbers. Plenty of anglers will be content to stay dry in the confines of their boat and play tug of war with redfish and occasional large black drum. Live bait or cracked crab are often tops for producing both of these hard-pulling species. You can flat out get your string stretched at this time of the year and I can think of very few better ways to stay warm.

The first part of a new year always spawns hope for a successful future and I'm no different in that regard. My new website and guide service name "Wakes N Drakes" will debut soon and I'm really excited to get that project off the ground. I'll be expanding some of my services and look forward to making a few changes. The overall positive attitude about the New Year is often very contagious and I hope that you get that feeling as well. For many folks, the past year was a rough one and the thought of a fresh start only arouses the optimist in all of us.

If you will be venturing out during these raw-weather days, please take every precaution to be safe and remember to wear your life jacket. Strong wind and cold water are nothing to take lightly. Enjoy the opportunity and make the most of the winter season.