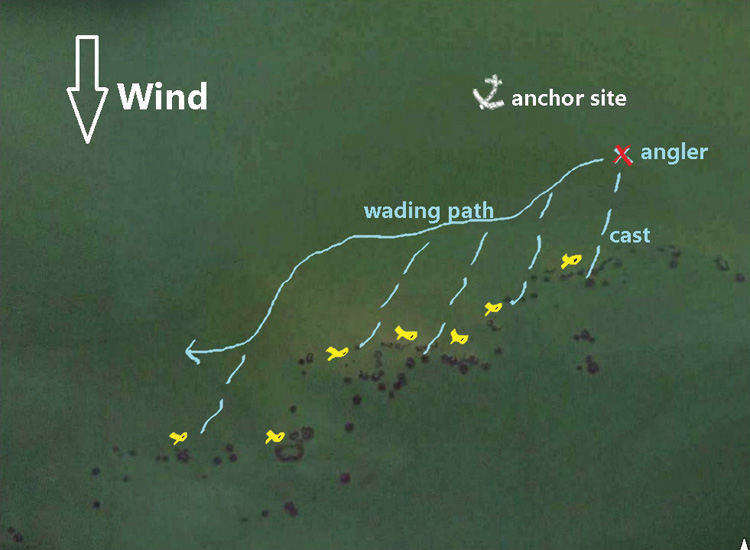 In the scenario depicted here, an angler works a pattern which allows for wading along upwind of a rock bar and casting a topwater lure cross-ways to the wind, so the plug lands in the shallows atop the rocks and moves into deeper water on their upwind sides, where trout wait to ambush their prey.

For lure chunkers targeting speckled trout, a familiar old adage rings consistently true. “Find the bait, find the fish.” Though the specifics vary widely, the truth generally applies, regardless of the time of year, weather elements in play, depth of water, or other aspects of the situation.

Despite the reliability of the tenet above, for the purposes of the discussion below, presence of prey species plays only a minor part. At some level, finding bait and using signs of stress exhibited by the bait can't be considered a fishing “pattern.” Other elements comprise the essence of a pattern. In order to meet the strictest definition of a pattern, a situation must include some, though not all, of the following natural elements: depth of water and depth variation in the area, wind speed and direction, and current speed and direction. It also then includes human elements, related to lure choice(s) and presentation style(s).

Identifying a potentially productive pattern allows an angler to accurately predict both the precise locations of fish in an area and an effective method to use to make the fish strike.Both the natural and human aspects sometimes prove reliable without dependence on the other.A particular lure choice and/or presentation might produce strikes in all kinds of places on some days, and on other occasions, probing a particular depth might allow one to catch plenty of fish on various lures worked most any way.

At other times, catching fish will require recognition and utilization of both types of aspects in order to achieve a successful outcome. On the toughest days, when identifying and employing a productive pattern carries the highest level of significance, one must incorporate all elements into play.

As mentioned above, depth of the water plays an important role in many patterns. Fish prefer different depths at different times, often basing their choices on temperature. Particularly in extremely high and low temperatures, fish regularly move up and down in the water column, seeking either cooler or warmer regions, depending on the situation. Sunny skies warming the water after a prolonged cold snap sometimes urge speckled trout into the shallows, where they bask in the welcome rays. The same conditions might pull them to the surface of deep basins, if the shallows lie a long distance away.

The purpose of this discussion involves clearly identifying general elements which comprise patterns, not the details related to specific patterns which tend to produce bites in different times of the year, places or situations. Whether an angler stands on a bay's bottom or on the deck of a boat, the depth of the surrounding water plays a significant role in a pattern. In some cases, particularly those which occur in stratified water with variable temperatures, the depth at which fish suspend becomes critically important.

Correctly identifying the depth preferred by the fish in an area provides a key to identifying the proper lure and presentation style to deploy in attempt to catch them. Since speckled trout generally feed by sight, looking up for their next meal, presenting a lure close above their heads strongly impacts the ability to urge them to strike. Fish which actively seek to feed have larger “cones of influence” than inactively feeding fish, but in almost all cases, presenting lures above and in front of trout works best.

Of course, determining the preferred depth of the fish relates to the next natural element involved in a pattern--the variability of depths in the area. In general, places holding water of various depths within a relatively small area prove more productive than places with homogenous depths over a longer range. Depth variation can result from several influential natural factors, including currents, winds, and the presence of structural elements, like oyster reefs, serpulid rocks and sand bars. Human activities like dredging create artificial depth variations, along channel edges and in places where pipes dumping dredged material generate spoil banks. Speckled trout often relate to all of these structural elements on the bottom, particularly when actively feeding.In some situations, they relate best to specific kinds of structure or cover elements better than all others present.

In many cases, when trout actively feed, they prefer shallower parts of an area, in close proximity to structure/cover elements. For instance, they venture into shin-deep guts along the beachfront at night and early on summer mornings, when tides roll in. They also arrive in subtle depressions atop oyster reefs to sit and wait for opportunities to ambush unsuspecting prey. Identifying routes which provide easy access from deeper parts of an area into these kinds of shallow places can help anglers figure out precise locations in which to target active fish.

Obviously, anglers with the most complete knowledge of the details of the topography of the bottom in an area have the best chance of properly incorporating this aspect of a pattern into a productive strategy. No shortcut can eliminate the effects of this reality. Anglers who work and study to learn more about the subtle structures and depth contours present in the waters in which they target fish have a better chance of identifying productive patterns on a consistent basis.

Part of recognizing potential in a pattern involves correctly deducing the effects of winds on the water and underlying terrain.As a general rule, water on the upwind side of a structural element shows higher potential than water on the downwind side. Wind speeds of twenty knots or more can render this truth obsolete, by causing excessive turbidity and/or creating difficulty in execution of angling strategies on the breezy side.

Similarly, water on the windward side of a lake, cove or even the main body of a bay generally proves more productive than water in leeward pockets. Depending on the type of bottom and the abundance of suspended sediment in a bay, this truth varies widely from place to place.In Lower Coast bays, where grass covers much of a generally firm, sandy bottom, and average levels of suspended sediment run low, windward shorelines produce better than in Upper Coast bays, where less grass covers a muddier bottom, and rivers dump copious amounts of sediment into the estuaries.

Wind speed and direction do more to establish a pattern than simply create turbidity in the water; they also dictate truths about the potential efficacy of various aspects of the angling strategy, including the optimal direction in which to focus an effort. Many lures work best when worked cross-ways to the wind. This truth rings more true as wind speeds increase, to a point.

Too much velocity in the wind can relegate anglers to casting straight downwind and retrieving upwind, often with negative consequences. In most cases, when moderate wind speeds prevail over coastal waters, anglers targeting trout should attempt to position themselves upwind of the fish they target, so the conditions enhance their casting distance and facilitate effective cross-wind presentations. Light winds allow for casting and retrieving lures in any direction, sometimes elevating the efficacy of upwind casts and downwind retrieves.

When present, moving water affects the other aspects of a pattern in a similar fashion to wind speed and direction. Speckled trout generally move and feed facing into the current.Consequently, determining the specific locations of fish in an area, and more importantly, the orientation of their sight cones, requires one to consider the direction of prevailing currents.Savvy anglers also factor current speed and direction into their lure choices and presentations.

In general, anglers targeting speckled trout should position themselves up-current of the fish and cast and retrieve lures in front of those fish. Floating and slow-sinking plugs work best when retrieved either directly down-current or cross-ways, with the current following. Most lures don't work well when worked directly against a current. Stronger current speeds make the preceding truth ring louder.

Currents of moderate to strong amplitude dictate other aspects of lure choice and presentation. Strong movement in the water will pull slow-sinking plugs too high in the water column at times, and will dictate the use of heavier jigheads on soft plastics in situations which require maintaining close contact with the bottom or within a specific stratum of the water column. As a rule, slow to moderately moving tidal influences allow for more flexibility and creativity in lure choices and presentation styles, while strong tidal flow reduces choices.

Recognizing how the prevailing natural elements of a pattern affect the probability of finding fish in specific parts of an area allows one to set up a valid strategy to test the veracity of the predictions. Once an angler commits to targeting fish within a specific part of the area, experimentation with lure choice and presentation can proceed with purpose. If one can then determine a productive lure and method of presentation, one can deploy the strategy in all parts of the area likely to hold fish. This process usually involves standing or positioning the boat upwind of a structural element or part of the area perceived to be holding fish at a particular depth and presenting lures in front of and above those fish, with consideration of the direction of wind and tidal currents.

Perhaps more importantly, once one identifies a productive pattern, one can move to other parts of an estuary and execute it repeatedly, bringing the aforementioned, reliable adage into play. On a given day, locating plenty of nervous bait in an area possessing a layout similar to a place which has already produced fish predictably elevates its potential for repeating a similar outcome.