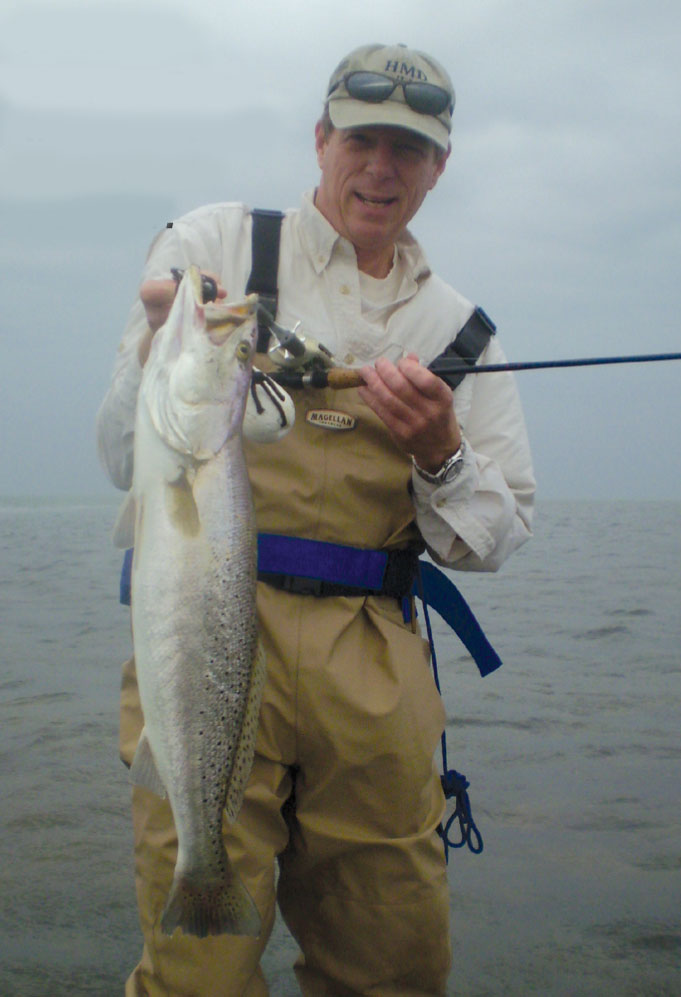 Another Corpus Bay trophy during inclement weather.
I learned many formative lessons about fishing while running the back highways and waterways of Texas during my years of competing in Troutmasters. Measuring one’s catch against other anglers is a great way to accelerate the learning curve. Many of the top trout fishermen in the state participated in the tournaments when I did, and the officials ran the events with a legitimate plan to identify the best.

We fished for three fish per day over two days, with a sixteen-inch minimum length. Almost always, we competed within defined venues. The allowed areas were set large enough to comfortably accommodate high numbers of participants, often exceeding two hundred, but boundaries were indeed drawn. The anglers could launch from wherever they wanted, so long as all their fishing efforts took place on the specified waters, within the stated time frames.

One of the lessons I learned early on was the importance of picking the right general area in which to start each day of competition. In a venue that might stretch from the Diversion Channel at the east end of West Matagorda to the chain of islands separating San Antonio and Ayers bays, there are many square miles of available water. Trying to cover all of them in one day is pointless.

Weather and water conditions often dictate that some bays or parts of bays offer better potential than others. Learning as much as possible about how conditions affect various areas is therefore critical to success in the effort to consistently stay in the most productive places. This truth applies not only in tournament fishing, but in any kind of fishing.

The memory I have of one particular tournament clearly emphasizes the importance of wisely choosing where to make the fishing effort. The poignant event was held in a venue which ran from the La Quinta Channel on the northern edge of Corpus Christi Bay to the northern end of the Land Cut, including all of Baffin Bay. The weigh-in was held in Riviera Beach.

The month was April; not surprisingly, a strong spring wind created tough fishing conditions. Prior to the tourney, a southeast gale growled for days, roughing up the bays and flicking foam off crested waves. Additionally, brown tide was blooming in Baffin and all its satellites.

Troutmasters had only come to Corpus once prior to that event. Most of the participants came from the Upper Coast and had relatively little experience fishing Baffin. Many were eager to take their chances there, having heard about the monster specks caught on its legendary rock-studded flats. The location of the weigh-in site was another factor which made fishing Baffin seem like a worthy idea.

Some of the contestants did fish in Baffin, thinking they could “make it happen” despite the rough, tainted waters and raking winds. I’m sure they embarked from the dock at the park in Riviera with high hopes and enthusiasm, given the reputation of the local bays. Mostly, they returned to the scales wearing long faces and carrying a sack of dinks, or worse, holding a skunk.

I and my partner chose to fish in Corpus Christi Bay instead, knowing that its waters are less susceptible to the destructive effects of a stiff southeast wind. Fishing there required logging many miles in the truck, but the hours spent on the road paid off in the end.

I almost won the pro division of the event, though I caught only two of the allowed three fish each day. In the last ten minutes of my available fishing time, I hooked two trout and brought them close to hand before they pulled free of the barbs and escaped. In the crystal clear shallows, I could see that each weighed in excess of four pounds, like the others I had caught; I wound up trailing the winner by three pounds, in third place.

That winning pro, a tested veteran of many events, reported that he’d fished in Corpus Bay. Likewise, after fishing Baffin the first day and weighing only small fish, the amateur champion made a move to Corpus Bay on day two and caught his winning stringer. I also recall that lady angler Helen McGinty led the big fish race and had a hefty stringer on day one while fishing north of the Emerald City.

Those facts stick with me to this day. They suggest it is often foolish to head to a famous bay when conditions don‘t allow much chance for success there. I’m well aware that Baffin Bay and its satellites are home to some of the biggest trout on the planet. That’s why I moved to North Padre Island! Nonetheless, going after those trout doesn’t make good sense every day, any more than wading Kain Cove always makes more sense than dredging the Colorado River.

That’s why I still point the bow of my Haynie north from time to time when guiding clients on a hunt for big fish. On some days, catching five-pound fish is a commendable result, even for the best anglers.

I know that fishing intelligently sometimes means finding ways to catch the biggest fish in areas given little credit for their trophy potential. Most talented trophy hunters hone their skills partly through smart choices of where to base their fishing efforts from day to day, not by stubbornly insisting on always fishing the local bay with the gaudiest reputation.

These days, some clients hiring guides in my area seem bent on pressuring their guides into fishing places with famous names. I don’t read about fishing on the internet much, but I have seen threads posted by people who were disappointed that their guide hadn’t taken them to Baffin despite the fact that they urged him to do so.

Clients pushing their guide to take them to a particular place run the risk of offending the captain and distracting him from potentially better plans. Any guide worth hiring should have a fishing plan based on real and legitimate ideas and experiences, not just the reputation of a nearby bay. A client who doesn’t trust the guide’s basic choice of where to fish should probably not hire that guide in the first place.

When chartering trophy excursions, I make a sincere commitment to going wherever I feel I must in order to encounter the best chance of catching big fish, given the conditions the fishing gods present. I expect those who hire me to respect my intentions with regard to that choice, whether it means we fish in Baffin and its satellites, the Upper Laguna Madre or in Corpus Christi Bay.

In the end, I strongly believe that a client looking to book a trophy-hunting trip has the right to demand to be taken to a specific bay. Many fishing guides, I’m sure, will happily go along with such a plan. Some have no doubt figured out that doing so takes pressure off of them. After all, if things don’t work out, they can always point out that they’d intended to fish elsewhere. I don’t look for such ready-made excuses, so I retain the right to make the critical choice of where the fishing will be done.