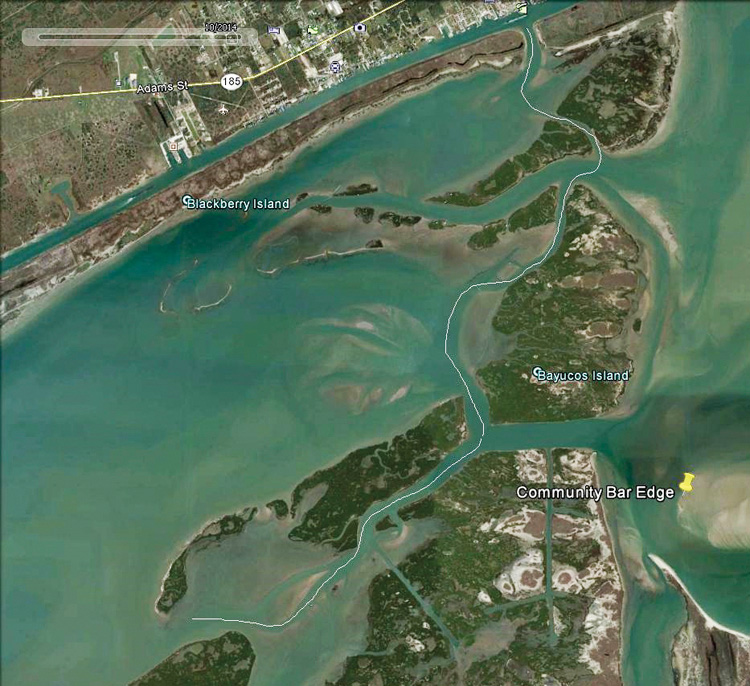 This image shows a path, or track, drawn in Google Earth with the Add Path tool.

Through connection to powerful cameras carried by satellites constantly orbiting our planet, Google Earth's website compiles stunningly clear, digital images of all parts of the surface of the globe.

Significantly for Texas saltwater anglers, these images reveal the bottom topography of any estuary holding reasonably clear water. Studious captains consequently use these pictures to refine their knowledge of the anatomy of the waterways in which they fish. Ideally, the study of Google Earth images enhances one's angling efforts in at least three ways, enabling more detailed mental templates, facilitating identification of productive spots and illuminating accurate perception of the safest pathways to navigate.

Most coastal anglers started learning the waters by using old-school, paper maps. In one way, crude resources like these provide superior data—they include references to depths at specific locations all over the depicted area. Google Earth images do not, since they simply record what the cameras' eyes can see. Users who wish to maximize the influence of using Google Earth must learn to approximate depths through analysis of the images, especially when trying to learn about areas they haven't physically visited.

Generally, water of different depths appears different colors, and the specific hue depends on what constitutes and/or covers the bottom. Relatively clear water of various depths lying over a homogenous mud or sand bottom usually takes on some shade of green. Learning to make judgments about depth depending on the subtle differences in these verdant hues takes some time and effort. Of course, in areas where grass beds, oyster reefs or rocks cover the bottom in clear water, the color/depth puzzle becomes more complex.

Some images in the database provide higher resolution than others, regardless of the location they depict. Additionally, images taken of Middle and Lower-Coast bays generally prove more useful, since the water in those areas holds the best average clarity. Silty bays like those on the Upper Coast hold water which the cameras' eyes can't penetrate as effectively, in some cases disrupting a user's ability to perceive water of various depths and masking bottom features. Nonetheless, all coastal anglers in the state can derive some benefit from studying the pictures in the Google Earth database.

Part of the process related to learning to approximate the depths of water represented by pictures viewed on the screen involves finding the clearest available images for the area. This practice requires learning how to use the View menu in the toolbar provided by the site. Clicking on the View menu reveals several selections, one of which reads Historical Imagery. Selecting View>Historical Imagery activates the time-scale displayed at the top left of the screen. Sliding the toggle button along the time-line moves one through the accumulated catalog of images recorded for the area chronologically.

Most of the older images stored in the database prove inferior to new ones in at least two ways. For one thing, they store potentially irrelevant data, meaning what they depict may have changed dramatically over the years, depending on what human and/or natural elements subsequently affected the landscape or body of water. Also, the cameras used to capture newer images provide superior resolution, so recently captured pictures look better and tend to show more details of the bottom topography. Consequently, when using Google Earth to learn more about an unfamiliar area, one should scroll through the newer images (dating back maybe ten years or so, if necessary) to reveal which ones show the bottom features most clearly.

Using a sharp, relatively recent image of the bay allows one to grasp a basic template of the layout of the estuary, including its depths in various parts. Locating deep holes, shallow structural elements and the transitional zones between those kinds of places can allow one to identify and compile lists of potentially productive spots to investigate.

In order to do so, one uses the Add Placemark tool, which marks a spot on the screen using latitude/longitude coordinates. When compiling a list of placemarks, a wise idea involves saving them in a folder in the Places list. To do so, right-click on My Places in the menu and select Add>Folder, then name the folder appropriately. This allows for storing all the marks for an area in the same folder, for simple viewing, and to facilitate transfer to the GPS.

Eventually, uploading placemarks (waypoints) into a GPS unit facilitates precise exploration of the sites. Google Earth can import and use .gpx files, the type specific to Garmin devices, but it creates .kml files in its database. So, in order to transfer Google Earth waypoints from the site to GPS units, users must convert the .kml files to the types of files compatible with their units. I've outlined these simple processes in my recently completed product titled Achieving A Tech-Savvy Angler.

Saving waypoints for investigation after studying them in Google Earth, then transferring them to the GPS provides a much more reliable outcome potential than simply venturing over to the location without any data on the GPS screen. Conditions at the time might easily inhibit one's ability to see any shallow structures clearly, creating difficulty for captains attempting to find spots they previously identified in Google Earth images.

In addition to saving waypoints in the GPS, printing out images and carrying them in the boat while exploring new areas might enhance exploration efforts, by allowing one to check the depths of various parts of the places shown in the pictures, either through the use of sonar equipment, or manually. This could finalize the processes involved in generating the clearest, most complete mental template for the areas in the mind of the angler using the techniques.

Users of Google Earth can also generate useful track lines and transfer them into their GPS units in a manner similar to the one used to create lists of waypoints. In order to generate new tracks in the program, one selects the Add Path tool. Clicking on the Add Path tool opens a window on the screen and converts the mouse arrow to a box. By left-clicking the mouse, one can then start a line at a precise point on the screen, and by holding the left side of the mouse clicked, one can draw a line across the screen continuously, creating a path, which can be converted into a track line. As with waypoints, one can convert these lines to formats which GPS units can read and send them to those units. Doing so allows one to venture into unfamiliar areas with a basic sense of the safest routes to use.

Of course, one cannot create track lines as precisely using Google Earth as one can while generating them in the boat under excellent navigating conditions. So, captains using track lines generated in the program should proceed with caution, revising the lines as necessary, based on observations made while on the water. This process proves somewhat simple too, at least for anglers who completely grasp the interconnected capabilities of GPS units and Google Earth.

This brings a basic point about using Google Earth back to the forefront—the software serves more for reference and study purposes than as an aid to safe navigation, when compared with the GPS unit itself. One can certainly use Google Earth to create both waypoints and tracks, to facilitate learning the basics of fishing and navigating in new areas.While doing so, one should always remain cognizant of the potential pitfalls associated with the activity, and proceed with extreme caution until able to verify the precision of data entered into the GPS through study of Google Earth images. Potentially, this means revising the data based on visual observations made on the scene.

Google Earth plays a primarily research-based role in the quiver of weapons used by the tech-savvy angler. The images in this remarkable database can help studious captains learn about the bottom features of our bays better than any other tool. Over time, after gaining familiarity with how the images look, what they represent in terms of depth and bottom types, most anglers begin to discern spots holding high potential for productivity. By expanding the user's comprehension of the anatomy of the waterways, Google Earth provides a valuable and necessary service in the search for a more extensive catalog of productive spots. In that way, maximizing the benefits of using Google Earth technology contributes mightily to the quest for consistency.