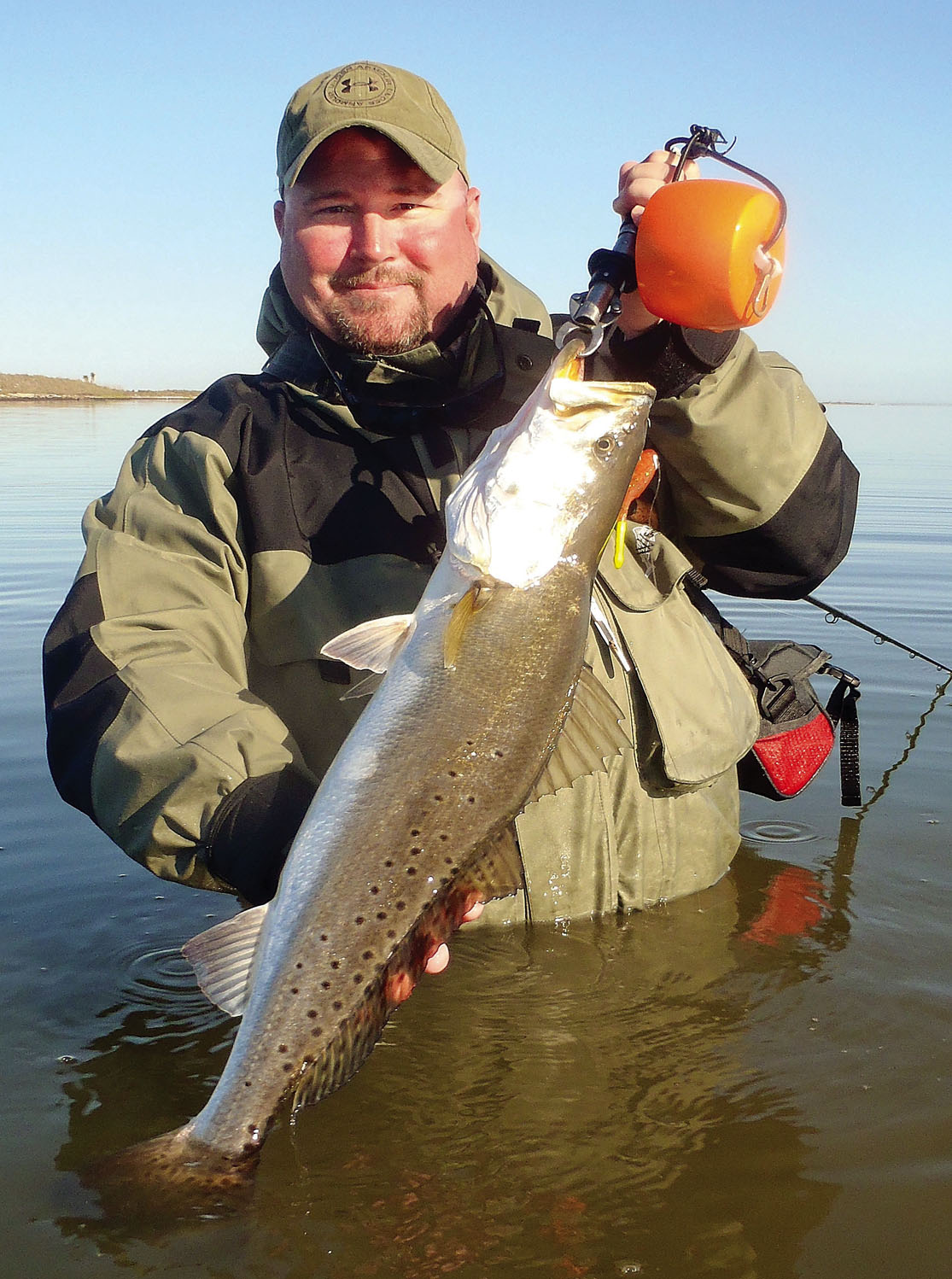 Chuck Holloway caught this beautiful trout on a calm day last January, during a slow bite. Because braided lines best facilitate the perception of light bites, they become most important during such times.
While watching a fishing show recently, I heard world champion B.A.S.S. angler Kevin Van Dam make some interesting comments about fishing line. The accomplished pro said, "I'm often asked the question: 'What's the best fishing line?'" His answer piqued my interest in a couple of different ways. "More and more, I find myself using fluorocarbon line," KVD proclaimed.

Mr. Van Dam correctly credited the low stretch and high sensitivity of fluorocarbon line as two of the attributes which make it such a good choice. The line also becomes nearly invisible when placed in the fishes' environment. Van Dam knows, "The fish won't see it and become reluctant to strike in clear water."

He went on to clarify his answer further by saying he much prefers braided line over the fluorocarbon when he's pitching jigs into deep water and/or heavy cover. He noted the nearly unbreakable braided lines have the lowest elasticity and highest sensitivity. All these attributes prove advantageous when anglers hook fish amidst gnarled vegetation and need to wrestle them through tangled limbs. Mostly, bass anglers use heavy braid for this drill, often 40 or even 50 lb. test.

Last, he identified a specific application where mono-filament becomes most useful. "When throwing topwaters, you must use mono, because it's the only line that floats. Sinking lines like fluorocarbon and braid drag the nose of floating lures downward, inhibiting presentations."

Several thoughts came to mind as I mulled over the expert's comments. These thoughts made me question the lines and rigging methods I and most other veteran coastal anglers use, one which incorporates a braided main line and a leader of less visible line, either mono-filament or fluorocarbon. First of all, I wondered if we shouldn't consider switching to fluorocarbon as our main line and eliminate the need for a leader.

Quickly, I realized our lightweight reels lack the capacity to hold enough fluorocarbon line of appropriate strength to work correctly. I simply can't advocate going back to tying lures directly onto lines with strengths in the 10 or 12 lb. test range, nor can I recommend using reels which will hold plenty of 20 lb. test fluorocarbon. Lines in the 14 to 16 lb. test range would perhaps provide enough protection against the sharp teeth of trout and abrasive lips of redfish, but even lines of those diameters will quickly fill the spools of reels weighing less than seven ounces, which work best for me.

I suppose one could use a lighter fluorocarbon main line and attach a heavier leader to it, similar to the way we now use braid with a leader. But fluorocarbon has less sensitivity than braid, a consequence I see no reason to accept, given no concurrent advantage. So braided lines clearly should remain spooled on our reels as our main lines.

His comments also caused me to mull over one other major issue, the idea that braided lines, because they sink, inhibit creative and effective presentations with topwaters. When thinking about this, I recalled several instances I've observed when people tied their plugs directly onto braided line or used a twist-on swivel and had trouble with the noses of their topwaters digging down under the surface when retrieved.

Bass pros probably perceive a bigger problem associated with the use of braid in this way because they generally use thicker, heavier braided line than coastal anglers use.

50 lb. test braid surely creates more of an issue than 20 lb. Adding the extra weight of a swivel to the end of a sinking line to facilitate changing plugs more easily can only exacerbate the problem. Furthermore, tying plugs with multiple treble hooks directly onto braided line causes the line to become tangled repeatedly in the front hook, providing another reason not to rig up in this manner.

Anglers tying their lures directly onto braided line or using swivels to attach them not only fail to acknowledge the useful role of the clear leader in preventing fish in clear water from striking, they also cause problems for themselves when using floating plugs. All these consequences render the idea of tying braided line directly onto a lure or using it in conjunction with a swivel and without a length of clear leader unacceptable to me. KVD's comments helped me reach a couple more important conclusions about this. One relates to differences between mine and the typical bass angler's reality.

For the record, I experienced no reduced capacity to work topwaters properly (meaning effectively and creatively) when I switched from mono to braid several years ago.

For one thing, I wade almost all the time, so I work my lures back to me while holding my rodtip upwards, at an angle. This reduces the amount of line touching the water, minimizing the effect the sinking line would have on the presentation of a floating plug. Bass anglers largely fish from a boat, often pointing their rodtip down at the water while working a topwater, placing more of the line in the water. Additionally, the lighter braided line I use, as compared to what a bass angler typically would, further minimizes the effect of the sinking line, since the lighter line sinks slower than a heavier one would.

While talking to my friend Jason King about all these things, I reached another epiphany of sorts. He said he observes a big difference in the way his lures (Spook Juniors and even Corkys) work when he uses a fluorocarbon leader of 25 lb. test as compared to when he uses 15 lb. His preference for tying his braided main line directly to the leader without the aid of a swivel allows him to use a leader which starts off at about 5 or 6 feet, before cutting and retying reduce its length. He says a long 25 lb. fluorocarbon leader noticeably pulls down on the heads of the plugs, making small floating plugs harder to work "correctly" and causing Corkys to sink more quickly.

I now realize my preference for a mono-filament leader, albeit one shorter than what Jason and many other coastal angler's use, might actually benefit my presentations in a way I hadn't considered previously. I typically use green 20 lb. Berkley Big Game as a leader, and attach it to the braided main line through the use of a size-10, black barrel swivel. The buoyancy of the mono-filament probably offsets the sinking effect of the light braided line, rendering the whole issue of braided lines inhibiting the effectiveness of topwaters obsolete.

Taken as a whole, the conclusions I reached verify what I already believed about my choice of lines and rigging method. They work best for me. I can't justify using fluorocarbon as a main line without a leader, because doing so would require me to use a larger, heavier reel, and I can't do that. I now believe more than ever in the usefulness of mono-filament as a leader in place of the more widely-preferred fluorocarbon; since mono floats, it helps offset the potentially negative effects the sinking braided lines exert on topwaters and slow-sinking twitch baits.

Jason intends to stick with fluorocarbon for use as a leader, citing the line's lower visibility level in clear waters as the reason he prefers it over mono. I contend the ever so slightly lower visibility of fluorocarbon as compared to green mono probably makes no difference in the number of strikes we get, and cannot offset these other issues.

I will continue to rig up the way I have for years, because I know using a clear leader improves the chances for getting strikes some of the time. For leader line, mono works best for me, because I find it easier to tie in foolproof knots when compared to fluorocarbon. Additionally, I now believe it allows my Corkys to sink at their intended slow rate and keeps the noses of my topwaters riding high, helping me make them bob and weave more enticingly.