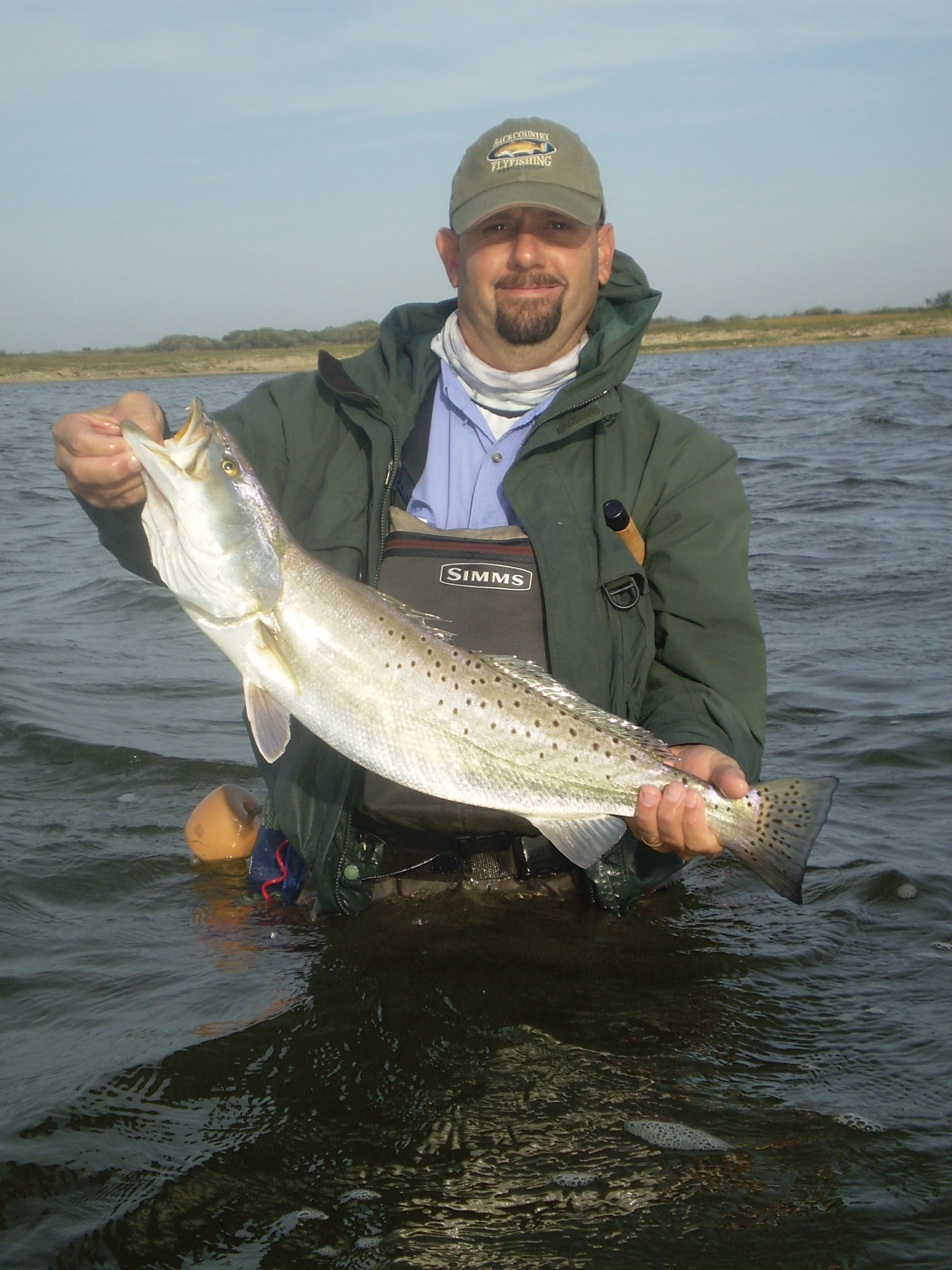 John Gill caught this thirty inch trout on his second bite of the day, nearly two hours into the fishing. Numerous jumping mullet prompted us to make a short move from our original spot.

A steady breeze snapped my shirt while I idled toward the day's first anchor site in the pre-dawn darkness. Tentatively, I set the Power Pole down, unsure if the water along my targeted grass edge would remain adequately clear despite the wind. Waves slapped the transom, occasionally spraying mist.

At least an hour would pass before I'd get a good look at the grass line, even if the water was holding relatively clear. If the wind mucked it up too badly, identifying the edge might become impossible. We'd have to approach the area cautiously, probing for the target corridor mostly by my feel and memory.

Ideally, we'd stand in a nearly barren, sandy gut running perpendicular to the wind and cast downwind, onto a grassy flat extending from shore. Most of the fish had been snuggled tight to the subtle edge where the grass drops off into the gut, or among shallow potholes on the shoreline side of the gut.

I explained the situation and directed my clients to follow my lead; we worked slowly, mostly at an angle to the breeze, slightly downwind, casting our small topwaters straight with the wind to better cope with the floating grass that lay in parallel rows. Our inherent tendency, if the bite turned out to be slow, would be to allow the strong breeze to push us through productive water too quickly, and we'd spook the fish we were trying to catch.

I kept a close eye on the group while we repeatedly cast toward shore, unable to see whether we were contacting the narrow zone of prime potential. For the first hour or so, none of us had a blow up. I preached patience, and each time the guys started forward, I warned them to move sideways to the wind instead. Several times, I stated the importance of making every cast to a slightly different spot and stressed the need for creative, variable presentations.

Trout approaching thirty inches were likely right in front of us. In four of five previous stops there, I'd caught at least one trout twenty eight inches or longer. My staying power was therefore high, but I was beginning to wonder if the wind had changed things too much when I saw one of my clients hook the first fish.

"Did you see that?" he asked. "I was ripping the rodtip real hard to get grass off the lure when she blew up!"

"Pretty good, I think," he nodded. Then a tall sheet of windswept suds erupted between us.

"Trout or red?" I asked, fearing it might be the latter.

"It's a big trout!" he answered, and I started toward him to document another "picture fish."

The events leading up to that catch remind me of some relevant points related to one of the most critical components of successful lure fishing--the choice of whether to stay put or move when the fishing starts off slow in a spot.

Most of the time, if I start off the morning fishing a spot on which I haven't had recent success catching big trout, I'll make a move within the first thirty minutes if the bites don't come easily. That quick first move is a basic strategy; I want to see if things look the same (and whether bites are easier to obtain) at another spot before too much of the prime daybreak bite potential is lost.

But, when I've been catching big trout most every time I stop at a spot and the weather and tide levels are stable, I'll be more stubborn in standing my ground and waiting for something to happen. In the story detailed above, my client proved such a strategy right that day, in spite of the strong winds threatening to negatively alter the spot.

Consistently productive wadefishermen regularly make the right decision of whether to move or stay put when they find the fishing in an area to be slow. Making the right choice means properly assessing whether fish are present or not. Many factors influence my perception of the likelihood of fish being in a spot, including the way I chose the spot in the first place.

Sometimes, I stop and fish because I see signs indicating the presence of fish while passing close to an area. Such signs might be slicks, nervous bait, mud stirs or even birds hovering over the water, standing on the shoreline or in the shallows nearby. The first stop of the morning will usually not be made after such observations, since I'm often putting the Power Pole down before dawn, when it's impossible to see.

I make the choice of where to start a day of fishing based either on a recent run of good fishing or the long-term history of the spot, referencing the conditions of the moment. I'd prefer to start off every day fishing in a place where I've caught numerous big trout recently, but doing so isn't always possible, especially when weather conditions change rapidly.

Once I've decided to fish somewhere that I haven't had a recent run of catching big trout, one of two things will need to happen in order for me to stay put for more than an hour or so. Either we'll catch fish easily, preferably big ones, or I'll see ample signs indicating fish are there, most notably plenty of nervous bait and/or slicks. If I decide to stay when we aren't actually catching fish, I will begin to methodically change what I'm doing in order to make something happen.

It's important to systematically change presentation styles (and/or type of lure) after deciding to stay put in a spot and wait out a slow bite. Anglers who successfully alter their strategies will eventually catch fish more often than those who stubbornly refuse to adjust.

Several variables should be considered when making these changes, including the depth, clarity and temperature of the water, time of year, wind speed and both recent and long-term experiences. Randomly experimenting is less likely to be effective than a thoughtful and specific plan. Staying put and changing presentations and lures is most of the time more productive than covering greater distances with the same plug worked the same way.

The tendency to wander far from the boat is a mistake I see made daily by waders who aren't catching where they originally intend to fish. Some of those people fail to accept the truth of what's preventing them from catching fish; fish are present within a reasonable distance of where they parked, but they aren't doing the right things to catch them.

Wandering off in search of fish on foot without changing plugs and presentations makes little sense to me in most cases. I rarely park in a place unless there's a sweet spot in close proximity, one I believe should be holding fish. If I decide fish are present in that sweet spot but we aren't yet catching, I'll plant my feet and change what I'm doing to try and make those fish take a bite. I won't race off across the bay like a greyhound.

Having the patience of a heron is helpful when trophy trout fishing; greyhounds are better off at the track, chasing rabbits! When wading, I won't rush around in circles like a numbered mutt, but I also won't stick to the ground like a slug, waiting for fish to show up in a spot without a recent track record, unless I perceive real and tangible reasons to do so.