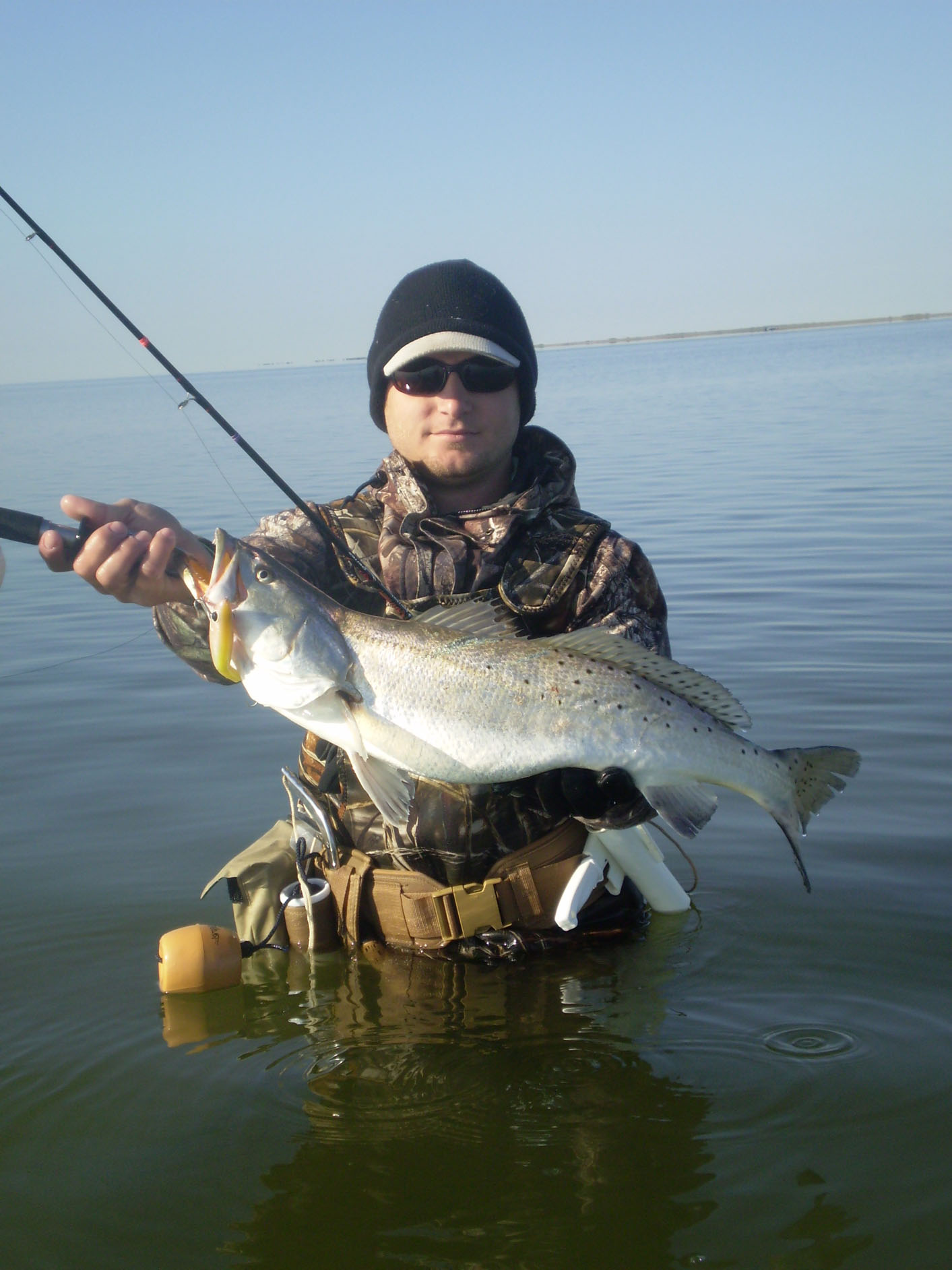 I catch most of my biggest trout in water less than waist deep. Mainly, that's due to the fact that I almost always fish by wading. Often, I find the best trout in areas that are shallower than many people are willing to fish. In different seasons and situations, this means different things.

Certainly, the most consistent trophy trout producers I know fish shallower than most other people most of the time. I'm referring here, of course, to those who fish exclusively with artificial lures. The ease of catching large trout on live bait in deeper waters throughout the warm period has been well documented. Fooling those fish on deep structures with lures is not quite so easy.

I've seen and caught trout in water barely deep enough to cover my boots when that water was fifty-something degrees, when it was in the upper eighties, and at all temperatures in between. Except in the most extreme situations, some of the biggest trout will likely be found in some of the skinniest confines of an estuary. Understanding that fact is only a first step in becoming proficient at catching those trophies, though.

Consistently pulling long fish from water that's mere inches deep requires an angler to practice the arts of stealth and patience, and to show skills in using a limited number of lures that work well within the extreme environment. First and foremost, catching trophy specks regularly in areas scarcely deep enough to cover their backs requires that an angler develop a proper mindset prior to entering into the attempt.

Searching for lunkers on a super skinny flat will normally involve making lots of casts for relatively few bites when compared with working the edges or deeper areas adjacent to the flat. For those who have only marginal desire to catch a trophy, the slow action can be their Achilles Heel. Some who make casts into deeper portions of the area will get bites relatively quickly and find that to their liking, then spend all or most of the day wading in water up to their bellies or chests, catching smaller fish. A propensity to inhabit shallow areas can make big trout more susceptible to the efforts of committed and dedicated anglers; it also potentially keeps them safe from impatient ones.

An acceptance of fewer bites per cast is essential for those who really want to improve their odds of catching big trout on a regular basis. Even in areas where substantial numbers of quality trout are to be found in shin to crotch deep confines, the catching often does not come easy. Several factors can influence the chances for success in actually locating, hooking and bringing trophy fish to hand in the shallows.

A stealthy approach to and through the area is one of those factors. Many locales that regularly hold magnum trout are exceedingly difficult for humans to traverse quietly. Sloshing through soft mud and grass while pushing a wake is sure to spook trout far away from clumsy hunters. Kicking and crunching on oyster shells will certainly do the same.

Wary trophy hunters move slowly in attempt to minimize their disturbance of the environment; mud stirred up and carried down current to fish-holding spots can make the catching more difficult, as can the influence of shadows. Fish instinctively fear things moving on two legs and casting a shadow over the water. Once aware of the presence of such a being in their midst, old trout are nearly impossible to catch. Anglers who ease carefully along and approach likely structures thoughtfully while making long casts increase their odds of hooking fish before those fish are aware of them.

People who enter into shallow spots with real resolve and who learn to move unobtrusively through those areas will catch more fish if they master the use of the lures best suited to such places. Isolated big fish are not particularly easy to trick, at least most of the time. In prime time, when many memorable trout can be found in water less than knee deep, a small number of specialty lures take on paramount importance. Most of these lures float or sink very slowly.

The simplest and easiest lure to throw at shallow specks is a conventional topwater plug. By conventional, I mean one that rides high on the surface and does not dive when retrieved. These types of lures come in many shapes and sizes; some are better suited to the shallows than others. Bulky, loud plugs will work at times to take shallow trophies, but smaller offerings and silent dog-walkers are better choices most of the time

Generally, it seems that trophy trout holding in the tight confines of shallow waters are not easily motivated to strike big plugs which create lots of water displacement, noise and commotion when they are moved. My favorite lure for duty in knee deep and shallower waters is a floating Corky.

Floating versions of the original Corky, the Fat Boy and the Jr. Corky outperform conventional topwaters impressively for me when I'm covering hyper-skinny areas in search of a few big bites. These lures will walk the dog like other topwaters, but they do so barely under the water's surface. Made without rattles, they slip silently along in an inviting, subtle manner that trophy fish often find hard to resist. When compared with sinking, rattling Corkies, the floaters can be worked more slowly without becoming snagged on bottom grass, shell or rocks.

I turn the reel handle at a snail's pace when working the floaters, using short, sharp and deliberately rhythmic strokes of the rodtip to walk the dog, intermittently stopping the rodtip movements to simply reel them straight in. With all types of Corkies, less is more when it comes to presentation style; this mantra certainly rings true with the floaters. Experimentation with the angle of cast, along with the speed, rhythm and consistency of the retrieve is often necessary to entice fish to bite on a given day. Though floating Corkies aren't the easiest lures to learn to use effectively, I believe they are the best available tools for the task of coaxing "picture fish" from skinny water much of the time.Other lure companies are now making plugs with qualities similar to the red-gilled Corkies. MirrOlure's MirrOdine XL is one such lure. The shad lookalike does have a rattle in it, but it's not particularly noisy, and it comes in just under the surface, like a floater Corky. I see great potential for this offering, especially in off-colored waters on bright, windy days.

A few other lures come to mind as having a place in the quiver of waders working thin waters. Soft plastics rigged weedless on worm hooks or on the H&H Flutter Jig can certainly produce big bites on boot deep flats. Some crafty soft plastic specialists efficiently wield worms and paddletails rigged on plain sixteenth ounce jigheads in these environments.

Spoons can surely be worked in the shallows without snagging grass or other junk. Some shallow running, floating-diving crankbaits similarly stay off bottom snags, but only when they are worked at an excruciatingly slow pace; those who aren't adequately versed in the arts of Zen Buddhism will likely struggle to stick with them. For me, the floating Corkies are normally the best tools for the super shallow drill. Using them productively requires skills and patience. Skills can be learned, of course. Patience really can't; it's a by-product of desire. Stalking around on shallow flats for hours on end, waiting, watching and experimenting with every aspect of the presentation of finesse lures is not for everyone. But for lure chunkers firmly committed to repeatedly catching trophy trout, it's business as usual.