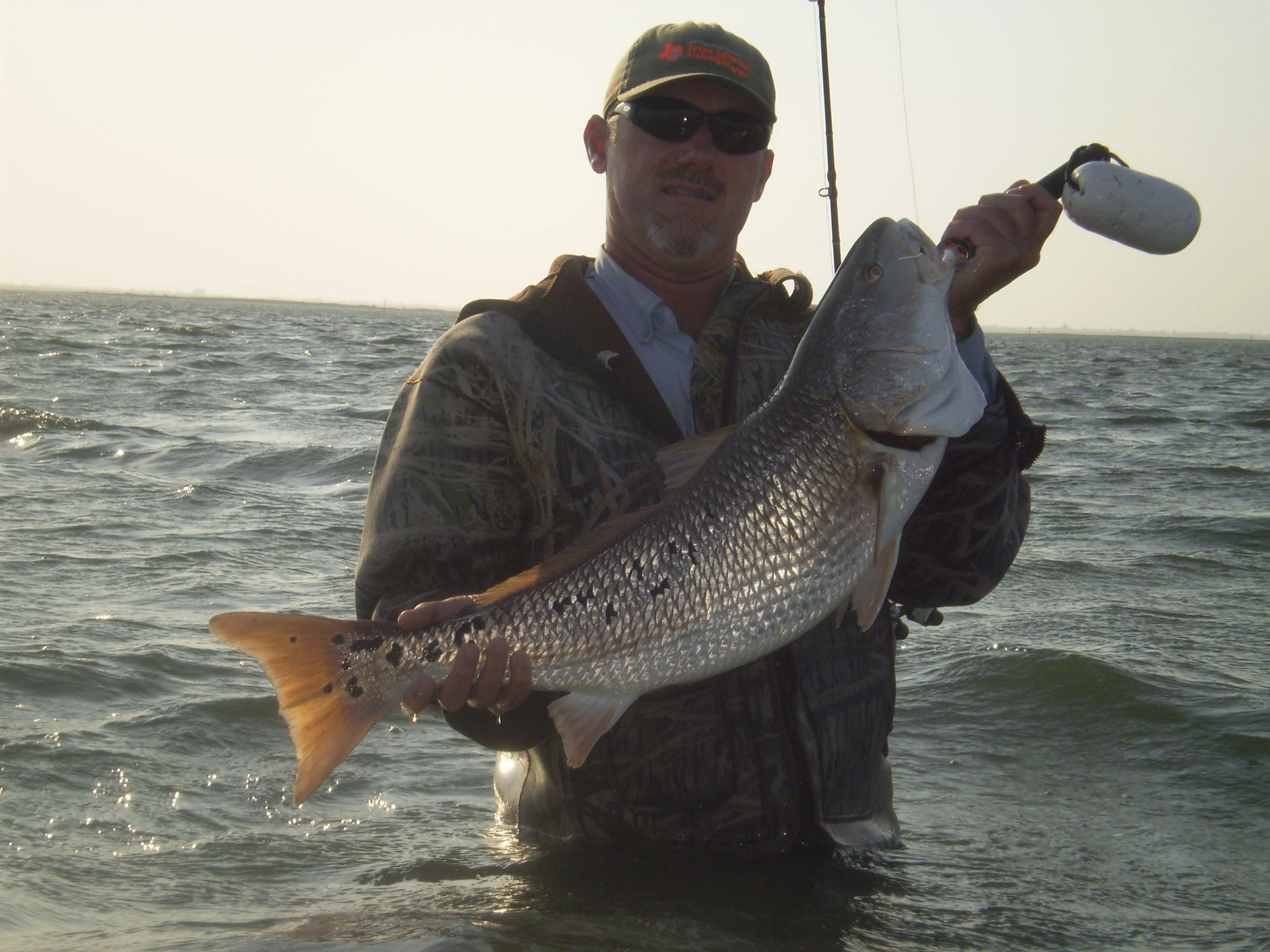 Scrolled in black letters on the side of my Haynie High Output are the words Trout Tracker. The phrase is more than the name of my guide service; it's a description of who I am as a fisherman. I almost always target trophy trout, especially when I'm chartering.

On most occasions, we catch other fish while trying to upgrade our personal best trout. Usually, the other fish are smaller trout. Sometimes, these colorful specks are barely bigger than the plugs we use to catch them!

I've heard several fishing experts assert that big trout won't mix with little ones. "If you start catching a bunch of dinks or small keepers, you need to leave," they say. "You won't catch a big fish with 'em." Certainly, catching lots of tiny trout won't necessarily lead to catching one or more magnum fish, but it can happen; I've personally done it numerous times.

It helps to analyze the situation carefully if a school of small specks is encountered during the hunt for the ol' big ones. Considering both the history of the spot and the time of year are important. If lots of small trout are encountered in warm waters, from say June through October, and those fish are numerous over a fairly large area, the chance of pulling a picture fish out of their midst is probably low.

However, when small trout are found in a proven big trout honey hole in winter or spring, culling through them will regularly result in catching larger fish. Trout of all sizes mix together in cold waters. I remember one such occasion vividly. On three casts made to a small pothole in the grass next to a rock, I first caught a twelve inch trout, then a seven pounder, and last a twin to the first dink.

On other occasions, the big and little trout aren't actually mixed, but catching enough of the lesser ones seems to attract the attention of better fish in the area. A number of times, I've encountered a fast bite on undersized trout around a pile of rocks, then had the bite go dead for a few minutes, only to have the action return again to a fever pitch, but with all the fish weighing four pounds and up! Seems that exciting the school of dinks and pulling them through the water while they wiggle sends a message out in the area. A gang of mature fish swimming curiously up to investigate likely activates a necessary self-preserving instinct in their inferiors, who then flee en masse.

Trophy trout are predatory and reliably known to dine on immature members of their species. Locating other predators in an area can indicate the potential presence of whopper specks too. Finding drum, both red and black, can and will do this trick.

Lots of Baffin old-timers tell of watching pods of giant trout following herds of puppy drum in this rightfully famous bay. I've never actually seen this, but I have had success catching big trout in areas where sizable groups of drum are visible. Of course, catching large specks around lots of drum happens more consistently if the drum are found in the vicinity of spots which are known to produce the desired trout in that season.

I remember fishing a shallow grass bar in Baffin one spring when I could see, hear and feel schools of drum milling around me. I'd already caught two twenty eight inch trout and an upper slot red when I saw one of the schools of drum moving right on top of the bar. While I made a slow trek over to where they were, the school slid off the subtle structure back into deeper, open waters.
Suddenly, in the exact spot where they'd crossed the bar, I saw a black tail waving above the surface of the hypersaline waters, which reached halfway up my thighs, making the depth approximately a relevant thirty inches. I cast my Super Spook beyond the fish, and while I walked it toward me, the tail disappeared.

When my plug crossed the spot where it had been, I saw no visible indication of a strike; the lure merely vanished in a tight swirl. After feeling the weight of me, the fish took off in a sizzling, sideways run for maybe sixty feet before the hooks pulled free. I can't swear that the fish I hooked and lost was a mammoth trout, but that one surely felt like a superior specimen, and I can't imagine a black or even red drum extracting my Super Spook from the surface in such a manner.

Many of the big trout I've hooked around schools of black drum have not escaped, of course. I have some pictures to prove that! I also have shots of memorable trout I've caught mixed in with red drum. Those who know me well can verify that I have other names for redfish, including the time-tested "carp", "channel bass", "rubber lippers" and other monikers that can't be printed here. The derisive language I direct at redfish is done with tongue in cheek, though, because they often lead me straight to the object of my pursuits.

Again, a savvy trout hunter will consider the whole situation when trying to determine whether locating reds in an area is likely to indicate the presence of large trout. Fast-moving, numerous reds found in relatively deep, open waters aren't likely to include a few giant trout in my experience.

On the other hand, smaller pods of reds moving more slowly around in shallower spots can and often do help me locate picture-worthy trout. I welcome the sight of the bronze bullies chasing after my topwaters and Corkys when they are doing so in winter and spring in places where I've caught trophy trout previously, especially if those reds are in the upper end of the slot or over it.
Not only does the sight of the copper carp increase my confidence that some worthy trout are within reach, it can also help me figure out what lures and presentations will work to catch them. I recall a recent day on which the sight of an aggressive red blowing up on a client's Corky clued me into a good feeding mood in the fish, so I switched to a Skitterwalk and caught more reds and several big trout on top.

I'm no biologist, so I don't know whether the trout are shadowing the pods of reds in attempt to scavenge food from them, or if it's just that in some seasons, trophy trout and nearly mature reds prefer to forage in the same places. In fact, the reasons don't really matter to me; I just know that finding the redfish often helps me find the trout and also figure out how to catch them.

Those are the real keys, locating the fish and determining how best to make them strike. Small trout, drum and redfish can all help in these endeavors when trophy trout are sought. I don't go out in search of dinks, drum and carp, but I'll surely use the information they are giving me when it's offered incidentally!