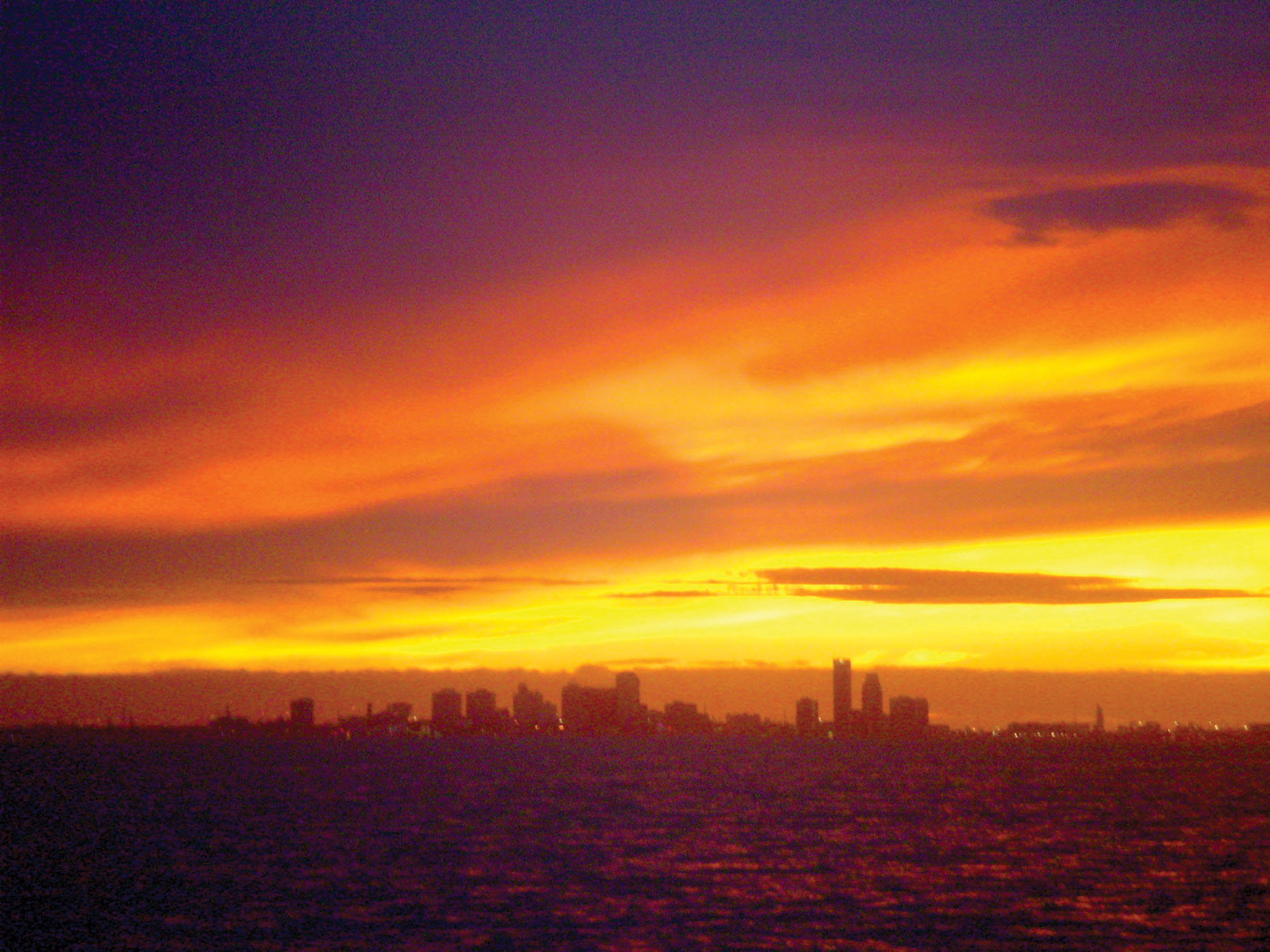 Before daylight, I step outside. My work is done outdoors, under the wide sky, in a pathless place where seasons turn in tune with ever changing tides. Above me, countless stars wink before a canopy of deepest blue; each time I exhale, little clouds of condensation rise around my head in the brisk autumn air.

In the east, the earliest streaks of light hint at the coming day. Dawn is a transient, yet utterly reliable, messenger. But the burnished light of dusk is a better metaphor for the poignant urgency of this season. Golden illuminations paint the western sky before night, like smoldering embers in a dying campfire.

On these shortening days, the bay is often quiet; gone are the loud crowds that covered it all summer. I'm likely to see more pintails than rooster tails rising over the water today. As I ready my boat for the trip, creatures of all kinds steadily migrate toward their wintering grounds.

Though many do not spend the winter on ground at all. Rafted redheads, blue bills and pintails will ride out most of the cold season atop the waves of the Laguna Madre. Numerous species of fish now swim purposefully beneath those same waves, heading toward the depths of the open ocean. They'll follow the currents through a moss-covered granite doorway, straight into the arms of their destinies.

Human beings are on the move too. Many who spent the summer on the bays in pursuit of trout and redfish will travel to other places to hunt other species, ones with horns, hooves, beaks and wings. The killing will continue in the fields, marshes and forests; blasting shotguns and rifles will announce the intentions of those who aim them.

Not that all the killing is a bad thing; thinning the flocks and herds is a necessary evil, one which sustains the species on both ends of the gun. A growing season without a harvest is meaningless as a day without dusk. But I embark on my hunt with no need for killing, only a quest for connection, to share a kind of communion with a significant member of the species I seek.

These things occupy my mind as I don the rubber suit which will keep me warm while I invade the submarine domain of my quarry. Autumn brings a cool edge to the water, sharp like the scythe the reaper eventually swings to slash all living things. The honing of the edge sends a message to the fish, stirring instincts to move and to feed voraciously when the opportunity presents itself.

I slide into the shallows to begin my work, armed with fake, plastic lures which become more effective in tricking trout as the schools of forage species abandon the estuaries in advance of the big chill. A determined gaze adorns my face while I watch the head of my pinging plug dance back and forth, cutting a crooked, disappearing path over the waves which lap gently at my sides in the growing light.

The catching is easy this morning. Trout of various sizes acrobatically attack what I offer with a serious and deadly intent. The waterfowl whistling overhead appear to proceed with a similar purpose; all of this focused energy derives fuel from the cool breeze. I become utterly content as I often am in this season of change, catching and releasing my trout, connecting with a society much simpler than my own.

Out here, immersed in the waves, I can temporarily erase thoughts of all the pesky obligations of everyday human life back on land, behind the walls, under electric lights. Among the fish, I become one with nature, turn inward to a place where the only things that matter are ancient, eternal urges and instincts.

I'm suddenly alerted by the tell-tale blip of a fish leaping up through the water's surface. I turn to see a mullet splash down amidst a bathtub-sized swirl and a mud stir, reinforcing my hunch about the motivation beneath its jump. This life and death drama occurs within my casting reach. Without hurrying, keeping my eyes glued on the spot, I make ready and pitch the plug a few feet beyond where the evidence betrayed the presence of a predator. When my lure plops down, I wait for a moment to allow concentric, widening circles to spread out before I give it life with my rodtip.

When the big trout bites, I am ready. I see the strike but don't set the hook until the weight of the fish forces a full bend in my rod. The spastic thrashing of the fish disrupts the water's surface, scribbling a kind of elegy in salty, white, bubbling streaks.

The spotted sow jumps and shakes her head defiantly, changing direction quickly, always resisting the pressure from my end. But her energy is spent in vain. When I'm able to pinch the trout's jagged yellow lip with the blunt, stainless steel teeth of my Boga Grip, my sense of satisfaction is complete.

I lift my prize from the water to measure her, noting the aqua blue and lavender hues reflecting from her glistening sides. Fear seems to widen her eyes while she beholds her captor. I see my face reflected in those eyes and wonder what memory of this, if any, she will carry in her remaining time.

When I'm done admiring my trophy, I release her from the tool and push her back and forth to move water over her gills. I can tell she's still strong; soon she frees herself with a vigorous flip of her black-tipped tail. While I watch the fish fade once more into the murky realm from which I temporarily removed her, a smug smile creases my countenance.

And there, under the autumn sky, while sharing Baffin with the fish and the flocks, I receive my epiphany. Sheepishly, I bow my head, as if doing so might provide relief from the strange, unexpected embarrassment which suddenly cloaks me.

I become acutely aware of an obvious, yet intentionally unacknowledged thing. Yes, I have released my fish, and still it lives. Yet I have amused myself at its expense.

Though I strongly believe in the ethics which lie at the heart of catch and release, I feel a twinge of grief over its practice. Appropriately, such an emotion comes to me in autumn, a season when many creatures must pass a gauntlet of smoking barrels, gaping jaws and gnashing teeth. Some will not survive to see next spring.

The arrival of this fall is more than the beginning of the end of a year, it's also a stage in my life's journey. My goatee's gone almost completely gray, my eyesight is no longer acute, and I see things differently than I once did.

I embarked on a journey here in attempt to glorify a season, a sporting ethic and a species, but what I've done is chronicle the exquisite anguish of a moment. It's a proud moment of elation, completion, communion and relief. In a world of words and tools and all things designed by the hand of man, those concepts make sense.

The fish knows nothing about such complex things; it knows only a struggle to survive.

For the fish, the end of our meeting brought a new beginning. For me, the event stirred a sentimental realization, one which ironically spoiled my innocence.