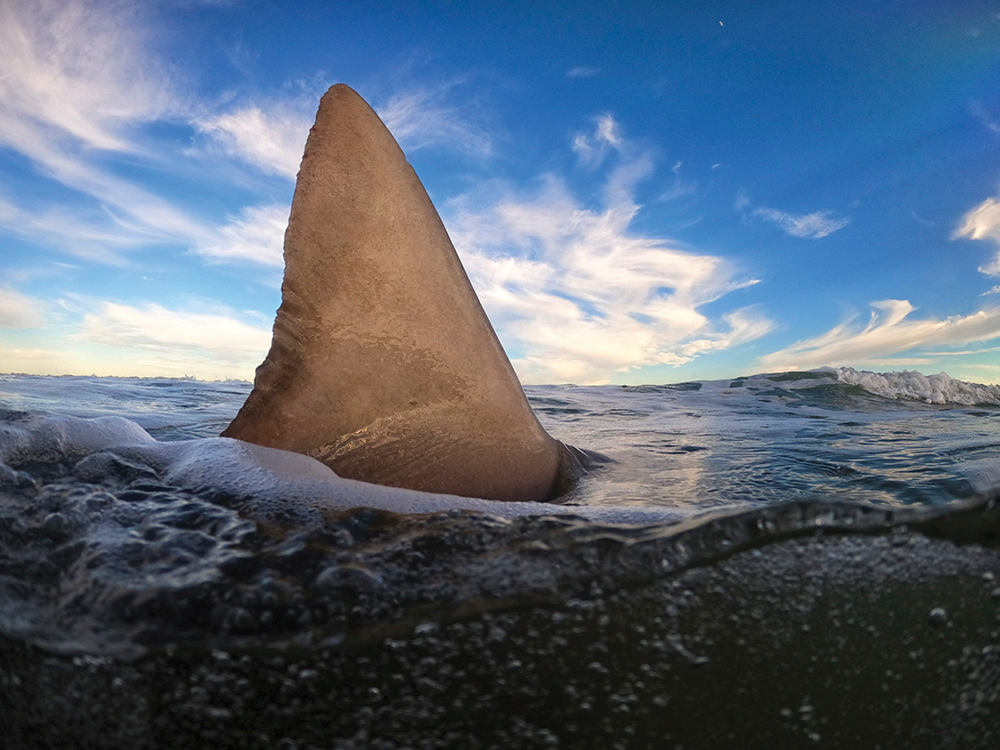 The sandbar’s outsized dorsal fin is usually the first signal of its identity.

As I've grown older, I've come to appreciate the pristine atmospheres present on South Texas beaches during cold, crisp winter nights.  Low-humidity levels pave the way for some of the clearest skies of the year, allowing a fantastic display of stars and other celestial objects, setting up an amateur astronomer's dream scenario.

On these dark, cold nights, I sometimes share the spectacle with one of my favorite creatures, the sandbar shark (Carcharhinus plumbeus).  The sandbars visits to the Texas coast bring life to otherwise deserted and desolate beaches.  This species prefers cool water, and is most abundant in our surf from December through March.  While not our biggest sharks, they do attain weights of over 200 pounds, and rank at the top of the list of most aggressive beasts to battle on sand.  For nearly two decades, I've earned seemingly endless excitement pursuing the spunky species.

Two major peaks in activity for the sandbar sharks occur, one around Christmas, the other in late-February. During these periods, large mature male and female sandbar sharks roam the South Texas surf in great numbers, likely mating.  The males often have swollen claspers (reproductive organs) which indicate recent mating activity.

The species can be encountered throughout the winter, more likely close to the beach when water clarity runs highest.  January is often our coldest month, and the turbulent effects of strong fronts and variable water temperatures usually create dirty water.  Like most bigger shark species, sandbars prefer pretty green water and light to moderate wave action; most anglers meet them during optimal times, while benign conditions prevail.

The anatomy of a sandbar shark adds to its iconic appeal.  Other than the hammerhead species, this shark has the largest dorsal fin, in terms of surface area.  Unlike the hammer’s tall saber-like dorsal, the shorter dorsal of sandbars have wider bases.  Often, the first evidence seen of a sandbar after it's hooked is this broad dorsal slicing through the water.  Once beached, another tell-tale anatomical feature presents itself—the raised ridge running along a sandy's back between the first and second dorsal fins.

Depending on the size of the specimen, this raised inter-dorsal ridge may span from one to two feet in length.  The only other shark with a similar ridge on its back is the closely related dusky.  Dusky and sandbar sharks look pretty similar, but the sandbars' dorsals are larger.   A sandbar's husky body shape looks more like a bull's, while a dusky's body looks more slender and elongated.

In Texas, the timing of a catch offers a clue about species, too.  While Florida anglers catch an occasional dusky from land in winter, here in Texas we only encounter them from the surf during the summer, in the midst of cold-water upwellings.   Chances run high that a big shark landed on a beach in Texas during winter is a sandy.

Mature individuals,  which average just over seven feet in length, use their agility and speed to chase down and eat all kinds of prey, from small whiting to speedy pompano and sluggish black drum, all of which occur in the Texas surf in abundance during winter months.  Perhaps because they're so numerous and relatively easy for the predators to catch, whiting are the favorite food for this voracious species.  Consequently, anglers hoping to catch sandbar sharks don't have to run giant baits like those used to entice bites from mammoth bulls or beastly tigers.  A large whiting with a single circle hook threaded through its mouth, out the gills, then in and out again in its stomach region is among the most effective baits to use when targeting sandbar sharks.

Sandbars don't behave like blacktips or bulls, which come right up on the beach to feed.  I've only seen a couple large sandbars caught on a casted bait.  More often, these sharks prowl the deeper guts for their meals, so anglers willing to kayak baits out to such depths stand better chances of hooking one.

Fast, powerful and aggressive, much like blacktips and spinners, sandbars are one of only a few shark species known to breach the surface regularly when hooked.  They fight with great attitude, maybe due to the increased level of hormones they possess when breeding.  The power inherent to their physical nature becomes most evident when they're dragged onto the beach.

Like some other sharks, sandbars' flexibility allows them to bend their bodies enough to touch their tails with their noses.  This makes handling them on the beach quite dangerous, even for sharks.  I've only had two unfortunate battles with sharks where I physically sustained an injury.  One was with a massive dusky while I floated offshore in a kayak; the other was with a large sandbar on the jetties.

Bearing safety in mind has the utmost importance when handling these brutes.  One must remain ready to move out of their reach if they decide to swing their head around.  Though they likely have no real intention of harming someone, their physiology makes them inherently dangerous when they're flopping around on a beach, swinging their open mouths back and forth so forcefully.  Using a long tool to extract a hook from a sandy is a good idea, as it is with all sharks in general.

For me, one of the most relaxing, surreal and mystical aspects of shark fishing is being camped on a calm, frigid evening when one of these ghostly fish hits unexpectedly.  When a sandbar shark makes an appearance, euphoria resonates and burns the chill right off a lonesome winter night.  These critters bite about equally well on dark new moons and bright full ones.

In nearly 20 years spent pursuing this species, I've maxed out around seven and a half feet.  I've landed and handled countless sandbars up and down the coast, but never that magic eight footer.  It may take me another 20 years before I see my first 8-ball sandbar.  Rest assured, I won't be sitting home streaming movies to ride out the icy winter doldrums.  Instead, I'll be camping out on the chilled sands of the South Texas strand under a twinkling canopy, hoping to duke it out with an impressive and welcome winter visitor.