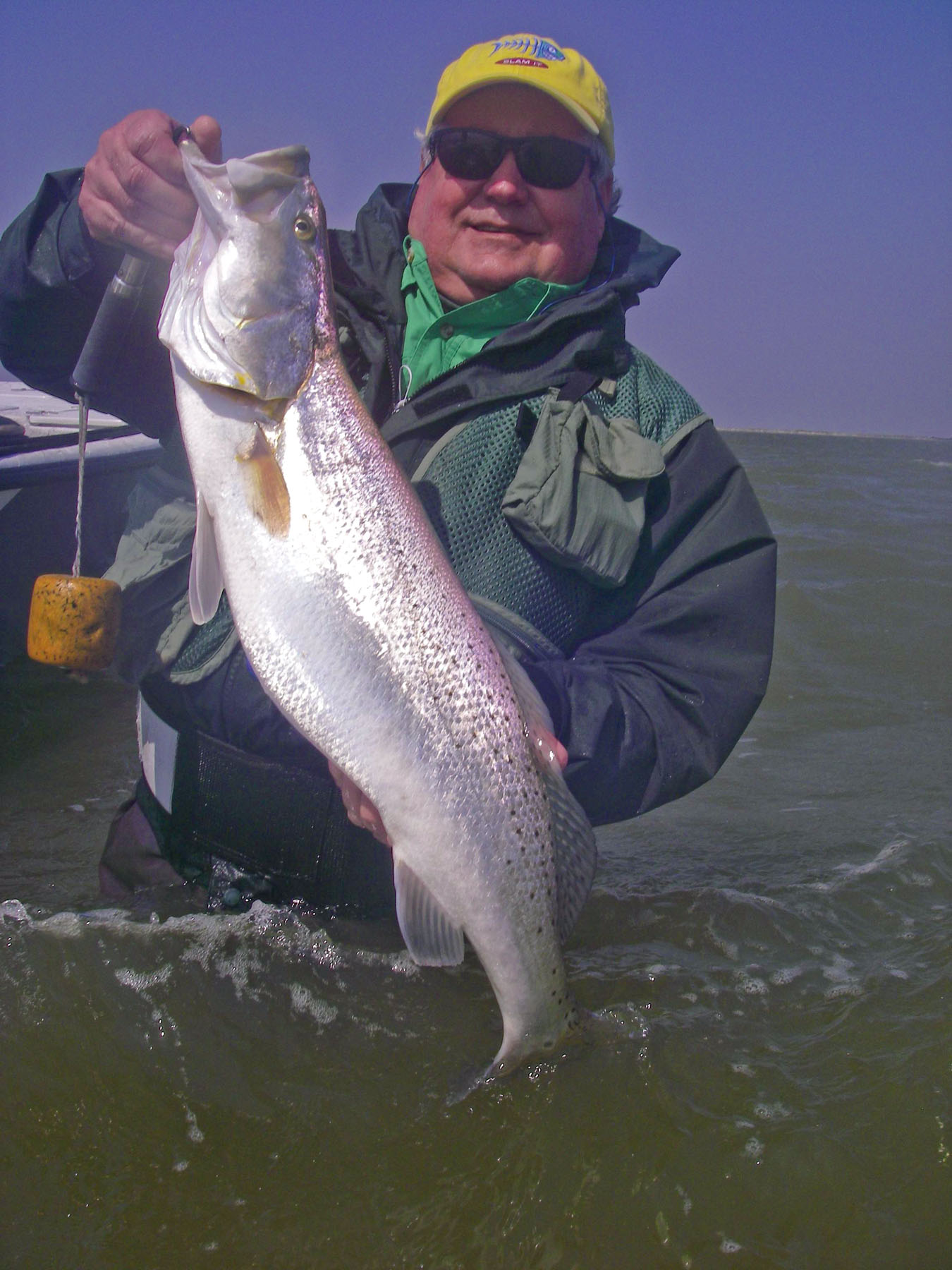 Mac McCune – personal best – 30.25 inches weighed 9.5 pounds – CPR!
Despite high wind, lack of grass, and super low tides; February and March brought some great fishing to the area. It should not be a surprise that many big fish have been caught down here this spring. Pictures of an eleven pound trout, talk of a twelve pounder, and a few fish over thirty-two inches have been the talk around the marina. The largest weights I have witnessed range from nine and a half to ten and a half with lengths up to thirty-two and a half inches. Folks, these are big fish, no doubt members of that mythical 1% of the trout population we strive so hard to catch. To be fair, I also have to give the mud apes some love, (redfish that is) they are everywhere you launch a lure. I cannot remember a year when we have caught so many heavy reds while specifically targeting trout.

Off-colored water conditions this spring have been the norm. The big loss of grass from the bay floor has left the Laguna and Baffin without its natural water filter. The good news is that it is already growing back as the bay water temperatures are averaging around 70 most days. Speaking of warming water, April is the month that we will be shedding our Simms waders for the Simms Flats Boot, so double check your old laces, and get ready to get wet again. Hard to believe that it is that time of year already. It just seems like yesterday that we were sweating out a fish kill with super low tides and water temperatures.

April is a super month for large fish. As the full moon (April 18) approaches, we will be greeted by spring equinox tides. Riding on that tide will be an influx of new baitfish, and trout. Some of the fastest action we will see all year, on quality fish, will be in April and continuing on into May. In years past, the greatest migration of trout would be coming from Port Mansfield (south), but over the last few years the Packery Channel pass has also given us some new fish from the north. Areas like Rocky Slough and Penascal Point will be the first places for these stud trout to show up from the south, while areas like Boat Hole, Nighthawk, and Emmord's Hole will be where migrants from the north will show first.

Trout will be on a wide variety of structure in April but my main focus will be hard sand and grass. There will still be some slow movers hanging out in the mud but most will be headed for grassy potholes in shallower water. This scenario works out great for me as I love sight-casting and finding large trout in less than knee deep water is the perfect combination of hunting and fishing.

Baffin Bay is famous for its rock formations and April is a great month for focusing on them. If you have never seen a school of mullet swimming in circles around a rock before, you may want to come on down. What you do not see, while watching those mullet stay in perfect formation, is the big trout that are keeping them there. They are just waiting there as the perfect bay predator to slam the first thing that leaves the safety of the rock pile. Find this scenario, cast a Bass Assassin or MirrOlure Corky off to the outside edges, and hold on. Like calling the eight ball in the corner pocket, you will have a better than average chance of impressing your friends with your trout savvy when you call the cast that will produce a big trout bite.
We have already been experiencing a great topwater bite, and that will continue throughout the warm months. Due to the high winds and ugly water, the loud-rattling MirrOlure He Dog and She Dog have been getting lots of playing time at the end of my Waterloo rod. There are literally days when these loud surface plugs are all they'll eat. Also noteworthy here any that have fished with me know that I also rely heavily on the five inch Bass Assassin. I don't do it because it is cute or because it comes in lots of colors this lure flat out catches them, and big ones too!

I had the pleasure to fish the 2011 Baffin Bash with a good friend that I consider one of the best fishermen to ever make footprints in Texas coastal mud. Mark Holt is not only an off-the-charts-good angler, he is a great Christian and family man, and just one of those guys that makes you feel good when he is around. Mark and I won the tournament by less than .25 pounds with Mark landing a thirty-two and a half inch beast for our anchor fish. The tournament format calls for only two participants on the boat but Mark and I had a third hand aboard guiding us that winning weekend. God was with us as he is each and every day. Mark and I both know that nothing can be done without him and anything is possible with him.

"When a person stands before other people and says he believes in me, then I will say that person belongs to me." Matthew 10:32-33