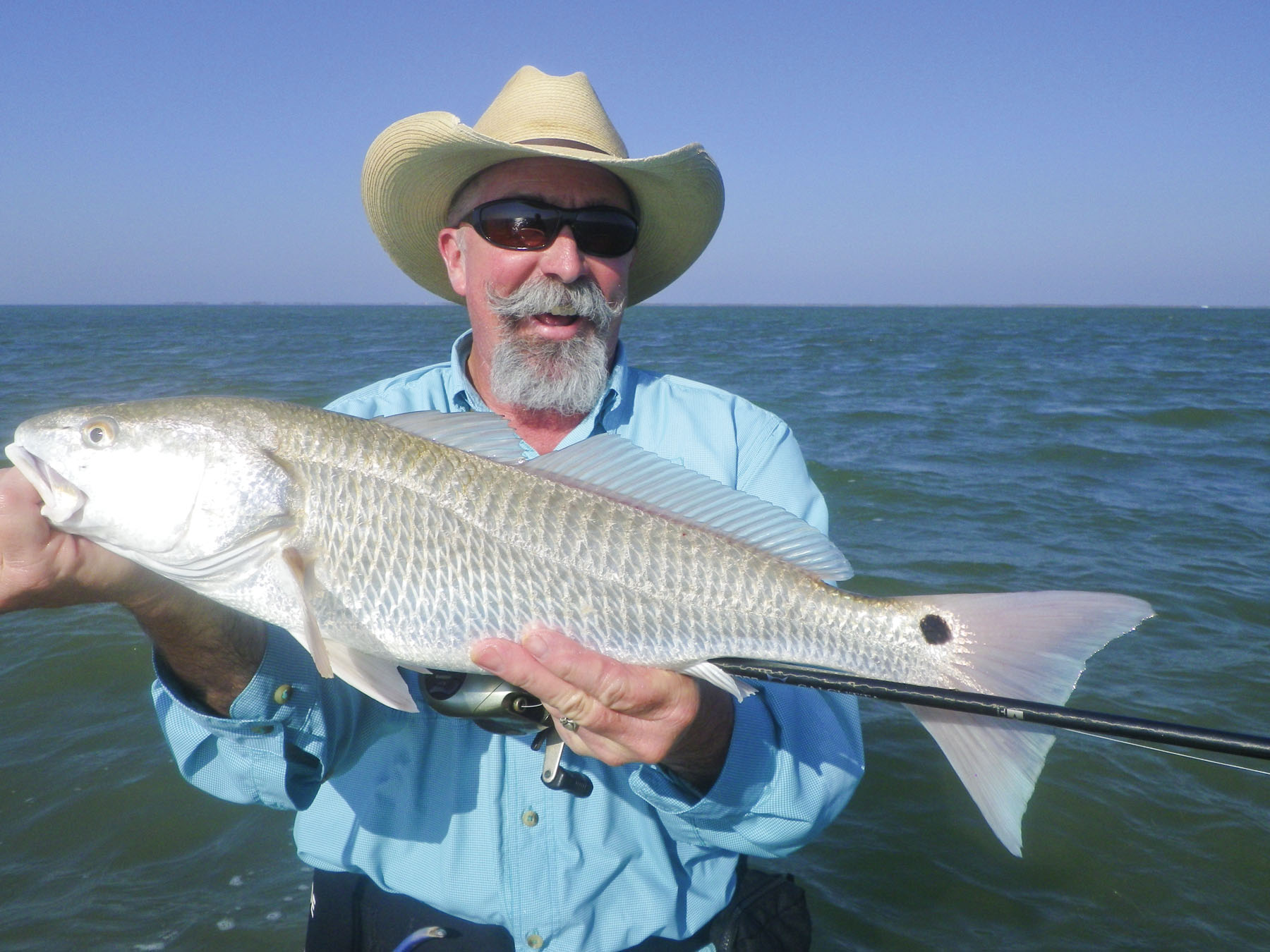 Mike Blakely, author, singer/songwriter, and storyteller with a nice red on his first trip to the Laguna.  Mike, Annie, and Stephen Fuchs were guests at my cabin for a weekend of fishing, singing, and relaxing.  A most memorable trip.  If you like real western music and a good ballad, do yourself a favor and look Mike up.
Cool mornings and the smell of fall in the air makes October a special month for most outdoorsmen. We have already passed the opening date for dove season, and if you are a bow hunter you are getting ready to enjoy the solitude of the hunt, without rifle shots in the background. Thanks to some good friends that got me interested in archery hunting I will get a chance to pursue what could be a new passion for me. Shooting 50-60 arrows a day for the last few months has become as therapeutic as sight fishing on the flats with no other fishermen within sight. I'm really looking forward to the adrenaline rush when I knock an arrow for the first time on some wild game.

October is truly a month of transition here in the Coastal Bend. It's still pretty hot, and the northern fronts have been too weak to get the big trout in an established pattern. Destinations north of here seem to have more success than we do here south of the JFK Causeway. For me, October is a time to prep for what I know is coming. I use this month to organize tackle, clean reels, re-hook old favorite lures, etc. As a full time guide, a solid month of preparation pays great dividends throughout the long winter and spring seasons for monster trout. If you are serious about catching trophy fish, use this time to get prepared for the hunt. You never know when you may get the call, "I'm in them, get here ASAP." Be ready!

Fish are still migrating to the gulf in October, so there is ample time to cut them off at the pass. Baitfish, reds and flounder will be my biggest target during October. Since TPWD lowered the bag limit on flounder a few years ago it has been amazing how consistently we catch them now (The same would be trout if common sense outweighed politics). It was not too long ago that I might only catch 3-5 per year! Now, with minimal effort, I can catch that in a day, not including my client's flat fish. Not having the opportunity in years past to target flounder, seeking them now has become a new favorite thing for us. They can be as elusive as a giant trout or as willing to bite as a school of little males. October is prime time to target them as they migrate to the passes, and you can bet that we will be in pursuit.

I'm asked almost daily, "What is the best month to catch a truly large trout?"

There is no way to answer that question accurately. My take on big trout is that the water needs to cool down to get the big girls in the right feeding pattern, gorging for winter, and seeking areas of the bay that hold warmer water temperatures. Some years it kicks off in November although the last two warm winters have pushed it back. Some of the largest trout I have ever caught have been in December and January, and those months still produce consistently for us. Cold fronts, cold fronts, cold fronts! The earlier and more often we get them, the quicker we will specifically target the Boone & Crockett's of the bay. If you want to insure a chance at one (or more), start looking at the calendar and booking dates.

Overall the late summer months proved to be on the slow side for topwater action. This should change during October. It always has in the past. Late afternoon fishing will also become more productive as the evening temperatures start to decline; therefore, it's not all that important to be the first boat at the marina. Personally, the last two hours of daylight, throwing a She Dog on the west shoreline can make for a memorable afternoon. I have been doing it for years with great success, as have many other locals. It's a good and quiet time to be on the water.

Don't leave the launch without some 5" Bass Assassins and 1/16 oz. jig heads (Pro Elite) anytime you are after trout down here. This combo is as effective as it gets when grinding out big trout here in the Laguna. If it came down to it, I would sacrifice a finger for the last bag of them when chasing big trout. Don't believe me? Ask Jay Watkins.