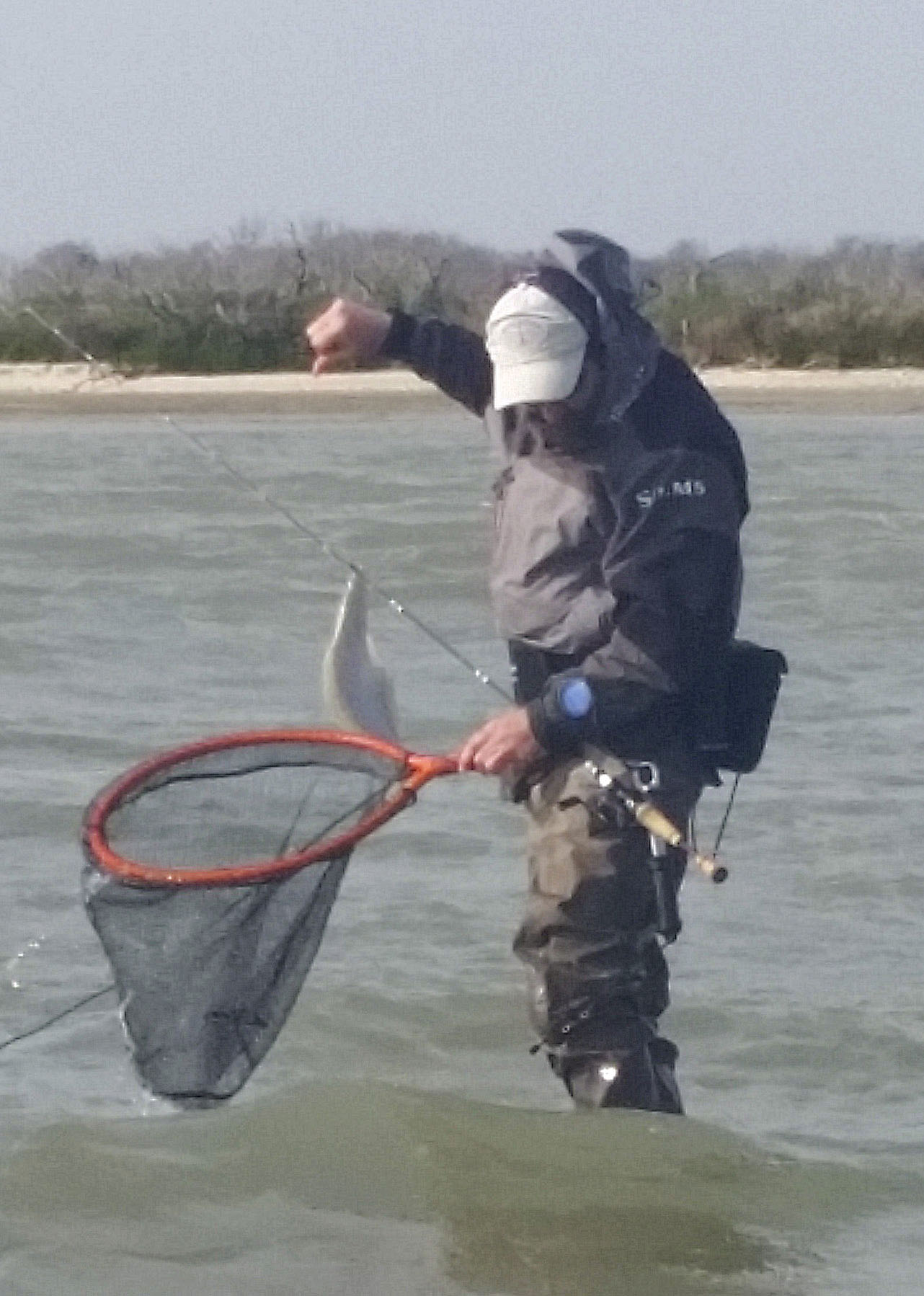 Jason Hagan with a tricky flounder that managed to get away – even after being in the net! Sorry if it is a bit blurry; I was shaking as bad as Jason!
Which is the best day to fish?

It seems everywhere you look there are apps and charts offering a heads-up as to tides and lunar phases to predict peak catching times. While these tools can definitely come in handy, local weather often plays an even greater role in fishing success.

March will be a cool month to fish with water temperatures often hovering in the 50s but an even bigger factor will likely be wind. It is no surprise to seasoned anglers how hard the wind can blow in early spring but don't let high wind deflate your attitude. Fortunately in the Seadrift/Port O'Connor area we are blessed with many options in protected back lakes.

Many of our back lakes are shallow and one would naturally think shallow water would be colder. But actually, the opposite is true. Most of these lakes have muddy bottom and that mud is dark in colorkind of like a giant solar panel, the lake bottoms absorb lots of warmth from the sun. The water also becomes warm and this attracts lots of fish.

Not trying to get you all confused but there is something else to consider for March. If we have consecutive sunny days, fish often migrate back out to major bays. A big giveaway to this is when you can observe bait schools on sandy shorelines near drains where they have been for weeks.

On a recent trip with a great group of guys we were forced to fish a scenario we would not normally fish on a cold day. As we got out for our first wade I felt it necessary to enlighten them why the heck we were fishing a hard sandy bottom in such frigid conditions.

With cold air and water temperatures and stiff NE wind we would normally be in a back lake with lots of bait present. However, with NW wind over several days prior, the tides were exceptionally low and the lakes all but drained. We weren't the only ones forced out of the lakes, the fish had to vacate also. In this pinch, the nearest deep water was the high percentage place to fish, which in this case was hard sand.

Rick Healey and Jason Hagan were quick to let me know they were artificial newbies but eager to learn. I gave them a quick tutorial and told them the fish we were after would be schooled and not scattered. Off we went.

After about an hour wading, hoping we would trip across a school, it was time to move on. Even though we didn't get our rods bent on the first wade it wasn't a total loss. I was able to give them more information on the area and a few more "how to" tactics as well. We spent the better part of the day looking for the schools of redfish I knew were in the area.

Lucky for me my guys were some of the best a guide could ask for. They came equipped with awesome gear for chilly conditions. Their optimistic patience was abundant and their witty sense of humor kept me laughing even though I was frustrated in not being able to locate the big school of redfish I knew had to be close by.

I was scratching my head wondering how in the world so many redfish could just disappear when I got the text from Gary letting me know he had found them. "Get your butts over here before they take off again!" As badly as I wanted it to be me that found the school, I was sure grateful to Gary for sharing his find.

We pulled up and quickly jumped out and the trash talk commenced. This day a 4-inch Assassins Sea Shad in either copperhead or chicken on a chain on a 1/8 jig was pure dynamite. Lots of laughs and trash talk with nice reds bending rods. Good times for sure. Jason was even lucky enough to catch a nice flounder but somewhere in all the excitement between trying to string it and unhooking it, the tricky flounder managed to get awayeven after being netted. Oh well, you'll get 'em next time Jason.

So what should you take away from this article? Well, on cold windy days the back lakes will be our go-to spot. Unless the tides have been horribly blown out and the lakes are dry. After consecutive warm days look for fish to relocate to main bay shorelines. March bridges the gap between winter and spring so it isn't always easy. Preparation, patience and positive attitude are the best ingredients for coming out a winner.