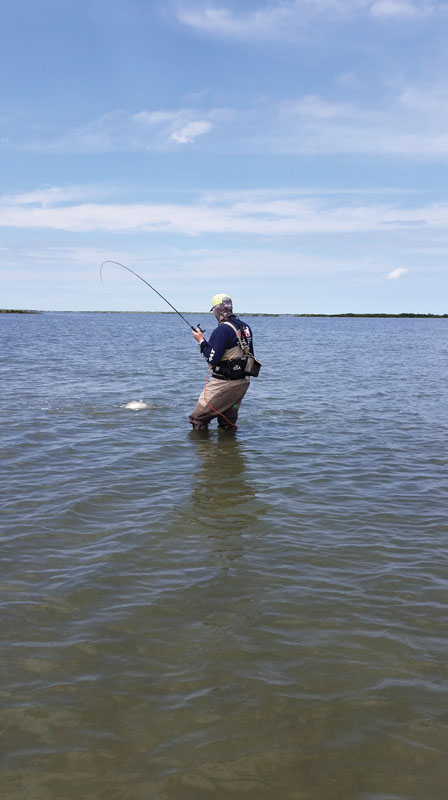 No need to fish deep during March’s warm-ups!

Our very mild winter has allowed us to fish during spectacular weather and we are not complaining in the least. Typically during colder months we adjust to fishing in lower than normal water levels due to fronts pushing water out, however, we had higher than normal water levels throughout December and most of January. Finally, around the end of January, we received a series of fronts that dropped the tides to normal low, wintertime levels.

Even with the current pleasant weather pattern we expect that fishing during March could be inconsistent. Though fewer, fronts will continue to impact the water conditions. And of course, March's legendary wind will be in the equation. You might as well get used to it.

My prediction of inconsistent fishing stems mostly from March's highly-changeable weather. Consistently warm weather will encourage trout and redfish to exit warmer, muddy back lakes and begin holding on sandy shorelines of the surrounding bays. But, even with consistent warm weather, a strong cold front can change everything as quickly as overnight.

So what can you do to help better your odds? First and foremost, watch the weather forecast!

It amazes me how many anglers show up ill-prepared to fish in the weather at hand, even knowing the weather will be changing. If a strong cold front moves through the night before, you should know that the water levels will be much lower than the day before and running a shortcut through an already shallow back lake may not be a good idea. I can't tell you how many phone calls we get from anglers who have run aground, stranded after a front. It's always the same story, "Well, I ran through here yesterday and there was plenty of water."

Another instance – if on the day you plan to fish the forecast calls for a front to arrive later in the day, make sure you have a good weather app on your phone or GPS. The forecast you referenced at daylight can change in a few hours, greatly limiting your ability to make it back to the dock before the mess hits the fan. Some fronts are absolutely ferocious upon arrival and the likelihood of finding help on the water during one of these can be slim to none.

Let's talk a bit about fishing. When I am fishing under exceptionally low water conditions, and I know I will in March, I usually concentrate my efforts toward the middle of the back lakes rather than along shorelines. This should be a no-brainer but, even when the water is a foot lower than normal, I still see anglers working shorelines where it's barely ankle deep because they caught fish there last fall.

We will get some periods of warmer weather between the fronts. Look for baitfish to become more active in the shallows. Baitfish jumping and flipping during these warm spells will be a signal to try topwaters and one of my favorites with light wind is the Super Spook Jr. If it is warm but the wind is stiff I usually opt for larger, louder plugs such as MirrOlure's She Dog or He Dog. I highly recommend that if you are not familiar with loop knots you need to learn to tie one. No other connection enables a surface plug to imitate a wounded baitfish as well.

Of course I will also rely on my Bass Assassins. This time of year my preference runs strongly toward neutral colors except when fishing along murky windward shorelines. The 4" Sea Shad in the pumpkin-chartreuse, salt and pepper Silver Phantom, and bone diamond are all good choices. If you should encounter blustery conditions, try tying on Bass Assassin 2 inch Kwik Cork to help draw more attention with the popping sound it creates. Using a cork also allows you to slow your presentation, allowing your offering to suspend longer in the strike zone.

If you are a fan of monofilament fishing line like me, early-spring is a good time to re-spool your reels with fresh line. Mono fishing line has memory and takes a significant "set" over prolonged non-use periods and this definitely limits your casting your casting ability. Plusnobody wants to be the angler that shows up with old, weak line in their reel and loses a bunch of nice fish.

With all the positive things that have occurred in the last few years I look for the fishing to be spectacular this year. So get your gear together, pack some cold ones and, let's go fishing!